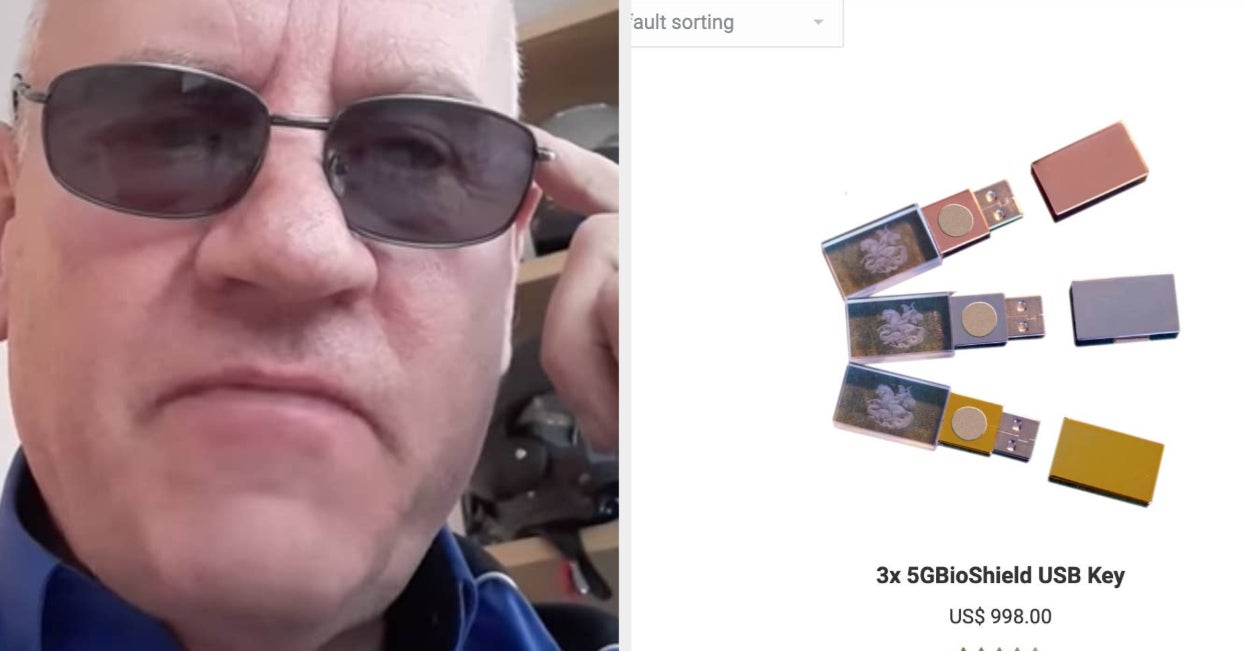 For $350, they’ll sell you a USB stick they claim protects you from harmful 5G radiation and prevents infection from the coronavirus. (It doesn't.)
A network of British conspiracy theorists are promoting - and profiting from - a hoax that 5G cellular technology is spreading COVID-19, the disease caused by the novel coronavirus.

As 5G, the industry term for the fifth generation of wireless communications infrastructure, has spread across 40 countries worldwide - most notably South Korea and China, but also in dozens of US cities - so too have distorted fears about its health effects.

On Wednesday, actor Woody Harrelson posted about the conspiracy theory on his Instagram: “a lot of my friends have been talking about the negative effects of 5G.” It isn't just talk - in the United Kingdom, at least 20 phone towers across the UK are believed to have been torched or otherwise vandalized since last Thursday. Harrelson, who could not be reached for comment, subsequently took down the post. Actor John Cusack tweeted about the purported dangers of 5G technology on Tuesday. A representative for the actor declined to comment.

In Great Britain, conspiracy theorist Mark Steele is one of the most active anti-5G campaigners. Though Steele's following on social media is fairly small, the conspiracy theorist gave a speech about 5G at a 2018 conference for the Democrats and Veterans Party, an offshoot of the British far-right political party UKIP, that was featured prominently in a now-deleted viral video about the claim. On his Facebook page, Steele has been aggregating videos of burning 5G cellphone towers, writing, "SEEMS THE PEOPLE HAVE WORKED OUT WHAT THE LAW IS AND HOW CRIME IS TO BE DEALT WITH NOT LIKE THE FAKE POLICE WHO ARE NOT ACTING AGAINST THIS CRIME AGAINST THEIR OWN COMMUNITIES."

In addition to promoting thinly substantiated pseudoscience, however, Steele is part of a network of British network anti-5G conspiracy theorists using speeches, selling anti-5G thumb drives, and crowdfunding to profit from the fear around the next-generation cellular technology and the unfounded idea it could cause COVID-19.

There is “no chance that COVID-19 is caused by 5G radiation,” Brandon Brown, an associate professor of epidemiology at the University of California, Riverside, told BuzzFeed News. “Rather than inventing new ways to get it, we should instead practice known prevention methods including physical distancing and hand hygiene. Funny enough, this includes washing hands before and after touching your USB stick or 5G phone. We should be wary of any promises of cure or therapy without scientific proof, as some people may try to make a profit off our current situation.”

"5G KILL GRID CRIME CONTINUES DURING LOCK DOWN,” Steele wrote last week on Facebook. “THESE CRIMINALS MUST THINK WE ARE AS STUPID AS THE SHEEP.”

Although his focus on the coronavirus pandemic is new, Steele's fixation on 5G is not. His online presence is entirely focused on the purported dangers of cellphones, and since 2018, he has been leading a harassment campaign against the Gateshead town council. That year, his harassment became so severe that the council was forced to publish a Facebook post denying it used 5G technology, as well as dismissing other pseudoscientific hoaxes, like claims that its street lights caused cancer. That same year, a British court convicted him for threatening two Gateshead councillors, and he is currently under an injunction to prevent him harassing or threatening the town's councilors or staff. BuzzFeed News has reached out to Gateshead town council for comment.

Steele has raised nearly £8,000 on GoFundMe to appeal his conviction, receiving donations as recently as last month. “We need to spread the word across the world and get the truth out as soon as possible to reduce the accumulative damage caused from this noxious radiation emission from 5G LED illegal experimental technologies,” his crowdfunding page reads.

Steele’s website has a donation page and a page to book him for speaking engagements. “We suggest charging a fee of between £3-5 per entry, so that all costs including Mark’s are covered,” the site reads.

Along with the 2018 Democrats and Veterans Party conference, Steele also spoke at the 5G Apocalypse event in London in September 2019, which brought together many of the UK’s 5G conspiracy theorists. One of the other speakers at the event, pharmacist Jacques Bauer, sells a $350 USB stick he calls the “5GBioShield,” which he falsely claims protects people from 5G radiation by converting it into beneficial radiation. BuzzFeed News has reached out to Bauer for comment.

The 5G Apocalypse event’s organizer, Bali-based New Age influencer Sacha Stone, is selling access to the full video of the event for $10, which includes 10% off Bauer’s USB stick. Stone and Steele regularly appear in videos together and are currently promoting the International Tribunal for Natural Justice, a New Age organization, which asks for monthly donations to investigate conspiracy theories like the dangers of 5G. BuzzFeed News has reached out to Stone for comment.

Another associate of Steele’s, John Kitson, also spoke about the supposed dangers of 5G at UKIP’s party conference in 2019. Kitson sells a different $350 USB stick, called the “5G Rezotone Shield,” which he falsely claims protects people from the coronavirus and 5G radiation, and saves people 30% on their vehicle fuel bills when carried in the car. He also promotes silica water - produced by a company that has been accused of preying on the fears of families of autistic children to hawk a fake therapy - and products that falsely claim to block electromagnetic radiation. BuzzFeed News has reached out to Kitson for comment.

Following public outcry in the UK over the recent attacks on 5G cellphone towers, YouTube said it will reduce the spread of anti-5G content on its platform.

"We have also begun reducing recommendations of borderline content such as conspiracy theories related to 5G and coronavirus that could misinform users in harmful ways,” a YouTube spokesperson told BuzzFeed News. “We’ll continue to evaluate the impact of these videos on communities around the world and look forward to continuing our work with governments and health institutions to keep the public safe and informed during this difficult time.”

Up until the COVID-19 pandemic, anti-5G content had been allowed to flourish on Facebook. One of the largest Facebook groups for the movement, Stop 5G U.K., has over 50,000 members. The most-shared video on Facebook about 5G was published in June 2019 and has 3.8 million views on YouTube and 270,000 shares on Facebook, according to social metrics site BuzzSumo.

There are countless more of these kinds of videos on Facebook right now. The increased scrutiny from mainstream social platforms and the British press has inspired members of the anti-5G community to start their own social network, Stop 5G.

A spokesperson for Facebook said it now considers any content linking 5G technology to the coronavirus as harmful.

“We are taking aggressive steps to stop misinformation and harmful content from spreading on our platforms and connect people to accurate information about the coronavirus,” the spokesperson told BuzzFeed News. “Under our existing policies against harmful misinformation, we are starting to remove false claims which link COVID-19 to 5G technology and could lead to physical harm.”

Anti-5G influencers like Steele, however, still continue to use Facebook and YouTube. “WAKE UP OTHERS WHO YOU WANT TO SAVE FROM THE 5G LED VACCINE GENOCIDE,” Steele titled one of his most recent videos.
#COVID-19  #vaccine  #Covid  #Coronavirus  #Facebook