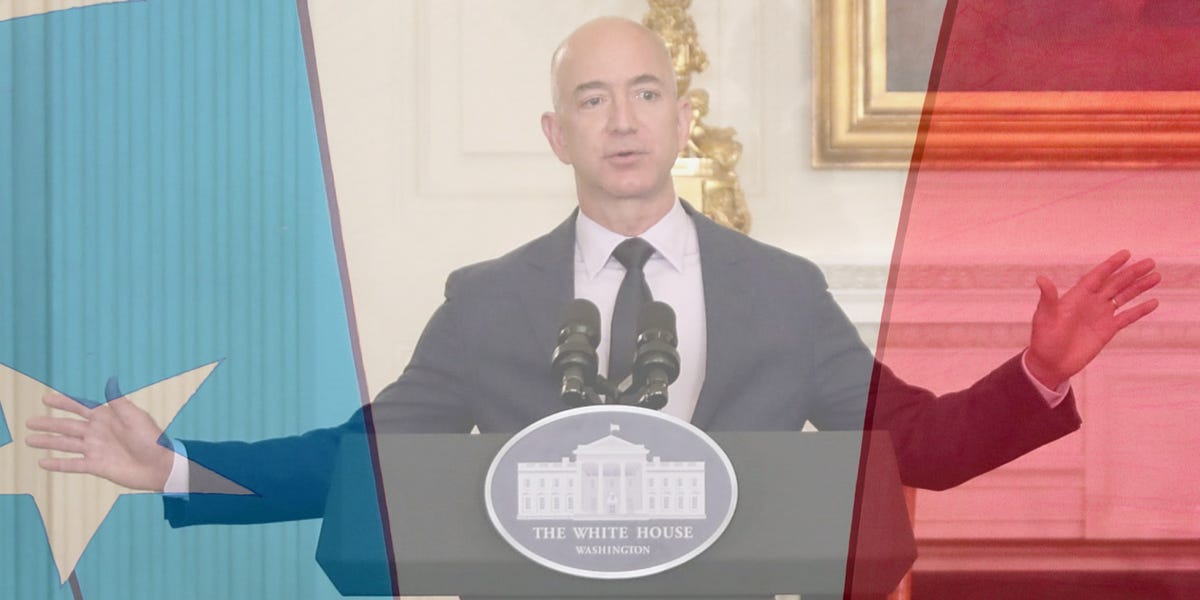 Amazon says it supports expanding voting rights but it gave $500,000 to lawmakers who oppose those efforts

Amazon blasted states' voter suppression efforts after years of supporting GOP lawmakers who have made it harder for Americans to vote.

Earlier this week, voting rights activists called for boycotts of Coca-Cola, Delta Airlines, and Home Depot, blasting the Georgia-based companies for not doing enough to oppose a controversial new state law that they condemned as voter suppression.

While all three issued generic statements in support of voting rights, critics accused the multibillion-dollar corporations, which have massive influence in national- and state-level politics, of failing to back up those words with actions — or their pocketbooks.

As Republican-led legislatures advance similar bills in Texas and other states, some companies have tried to get ahead of the backlash by issuing statements condemning efforts to restrict voting rights.

But many have a poor track record when it comes to supporting the lawmakers behind those efforts.

"It has been fifty-six years since the Voting Rights Act became law, yet efforts to disenfranchise Black people and other minorities continue to this day. The ability to vote is one of the most prized fundamental rights in our American democracy, and Amazon supports policies that protect and expand those rights," Amazon PR and public policy chief Jay Carney said in a statement on Twitter.

Carney, who previously worked as President Barack Obama's press secretary, praised efforts to expand voting rights in Virginia, where Amazon has a major presence and therefore plenty of reasons to stay in the good graces of its Democratic governor and state legislature.

"We oppose efforts in other states aimed at restricting the ability of Americans to vote," Carney added.

But that's not quite accurate, at least in terms of which politicians Amazon has supported. (Amazon did not respond to multiple requests for comment on this story).

Amazon spent $18.7 million on lobbying last year, an increase of 30% since 2018, making it the biggest spender in the US other than Facebook. Those expenditures help Amazon convince current members of Congress to pass laws that will benefit its business, like tax cuts and subsidies or bigger budgets for the government agencies it contracts with.

The company also gives money to congressional members and candidates to try to keep friendlier lawmakers in power or force unfriendly ones out. Amazon does that through its corporate Political Action Committee, which spent $1.9 million during the 2019-2020 election cycle alone, according to Insider's analysis of Federal Election Commission data via Open Secrets.

Of the $1.3 million that Amazon's PAC gave to individuals, $471,000 went to lawmakers who voted against the For the People Act, which would expand access to the ballot box, voter registration opportunities, and mail-in and early voting, as well as creating increased transparency in the US' campaign finance system.

And many of those lawmakers have a long history of opposing efforts to expand voting rights, both at the federal and state level.

Of the 186 Republican House members who voted in 2019 against restoring key parts of the Voting Rights Act of 1965, which would have made it harder for states like Georgia to pass voter suppression laws, Amazon supported 143 members, giving them a total of $510,000.

Just last May, California Rep. Darrell Issa sued the state for sending mail-in ballots to residents so they could vote safely during the pandemic. Amazon gave Issa $5,000 last election cycle.

According to data from the Texas Ethics Commission, Amazon also gave $15,000 last year to Republican lawmakers in the state, despite years of the party passing notoriously restrictive and discriminatory voter ID laws.

Voting rights have been a hyperpartisan issue for years, with Republicans arguing that restrictive voting rules are needed to prevent widespread fraud. But independent experts within and outside of the US have proved dozens of times that fraud is extremely rare and has never affected the outcome of an election and that bills restricting voting rights disproportionately impact people of color.

Yet Amazon has continued to support GOP lawmakers who even opposed Congress' last successful bipartisan voting rights law in 2002, the Help America Vote Act. Amazon gave a combined $53,500 to 12 of the members who fought that effort and are still in Congress over the past two years.

Dozens did, including Amazon, which had given $253,500 to 76 of those members, though it only promised to "suspend" those contributions, leaving the door open for the company to potentially resume its support closer to the 2022 congressional races.

Whether Amazon stands by its promise to oppose efforts "aimed at restricting the ability of Americans to vote" remains to be seen. But its spending record so far shows that it has often supported the lawmakers behind those exact efforts.