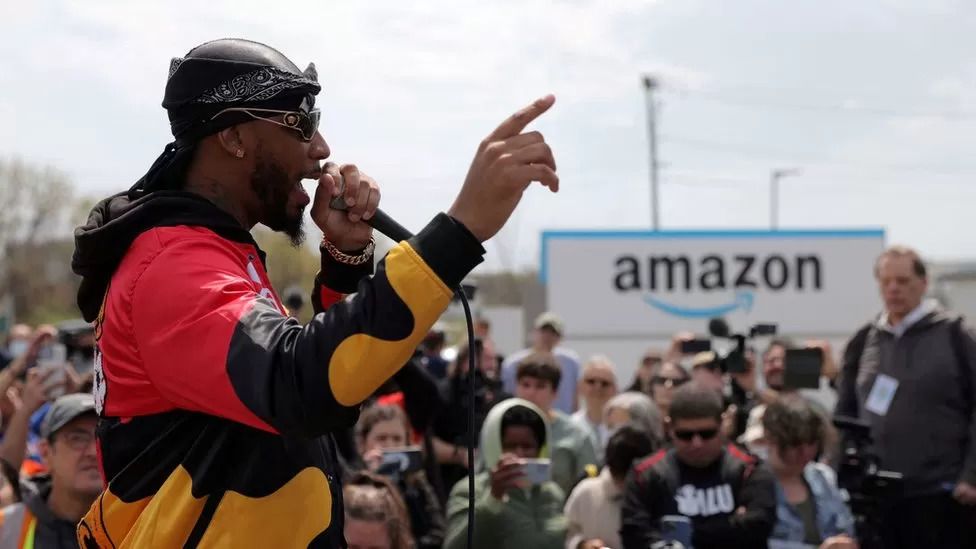 It has been almost a year since workers at an Amazon warehouse in New York voted to start the company's first-ever labour union in the US - an historic labour victory that won global attention. But the fight remains unfinished.

Amazon has been battling the outcome of the election in legal actions.

Efforts to organise workers at other warehouses, including one just across the street, have failed.

Negotiations with the company over a labour contract for the warehouse workers have yet to start - and, when they do, are expected to take years.

Former Amazon worker Chris Smalls, who started the union after the company fired him during the pandemic, takes the lack of progress in his stride.

"We know we're dealing with a trillion dollar company that is going to spend X amount of dollars to try to stop a union from taking place so the timing is just about what we expected," he says.

Earlier this month, regulators finally certified the victory of the Amazon Labor Union at JFK8, the warehouse on Staten Island that employs roughly 8,000 people.

Amazon, which has argued that regulators unfairly tilted the result of the election against the company, plans to appeal. This week the deadline it was facing was extended two more weeks.

"We knew it was unlikely that the NLRB (National Labor Relations Board) regional office would rule against itself, and intend to appeal," spokeswoman Kelly Nantel said.

"As we've said since the beginning, we don't believe this election process was fair, legitimate, or representative of the majority of what our team wants." 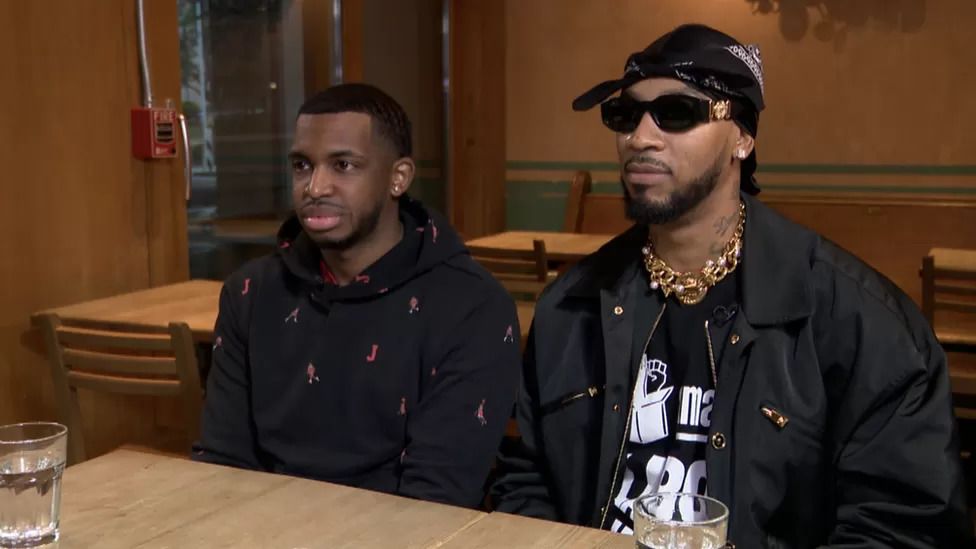 Amazon Labor Union leaders Derrick Palmer (left) and Chris Smalls
The state of play is indicative of the ongoing questions about the future of America's labour movement.

Despite an uptick in organising activity, the share of workers who are members of unions has continued its decades-long decline, falling to 10.1% last year, from 10.3% in 2021.

That is the lowest rate on record and roughly half what it was when the government started tracking the figures in 1983.

But there are some signs that labour organisers have made inroads.

More than 70% of Americans now support labour unions - the highest share since 1965, according to a 2022 Gallup poll.

Petitions from workers to start unions at their workplaces jumped 53% in the 12 months to October, to more than 2,510 - the highest number since 2016, the NLRB said.

And in the private sector, the number of workers who are members of unions actually increased by nearly 200,000 last year - the first rise in nearly a decade, driven by gains in sectors including transportation and warehousing.

Those gains did not keep pace with the overall growth of the workforce though, which expanded at a rapid clip last year.

Cathy Creighton, director of Cornell University's Industrial and Labor Relations Buffalo Co-Lab and former field attorney for the NLRB, says US law favours employers, making it unlikely that the activity will result in long-term gains for the labour movement.

The law does not even have a mechanism to force companies to agree a contract with workers, she says.

"I'm not saying there's not a movement afoot, but the question is: how will it go in the long run?" she says.

"Corporate America is fighting back hard and the government is not on the workers' side at this point, unless the American people realise what's happening, realise the barrier and ask their elected officials to change the law."

She says companies often successfully sap momentum from labour movements simply by running down the clock.

In this case, it has been nearly three years since Mr Smalls worked for Amazon, and the celebrity status he has since acquired has sparked accusations that he has become disconnected from work issues. Derrick Palmer, another top leader at Amazon Labor Union, has been suspended from work since late last year while the company investigates a worker dispute.

Mr Smalls rejects suggestions that Amazon's waiting game will succeed, pointing to new union campaigns in Minnesota and California. He is also due to visit the UK this week, where workers are planning their first-ever walkout.

"Their plan is to stall as long as they can but we're going to be creative on our end as well. That's what's gotten us here," he says.

"We don't want nothing else but a contract and we're not going to stop organising or stop fighting until we get it," he adds. "If the company's really a good company, then it's time to come to the table and negotiate."