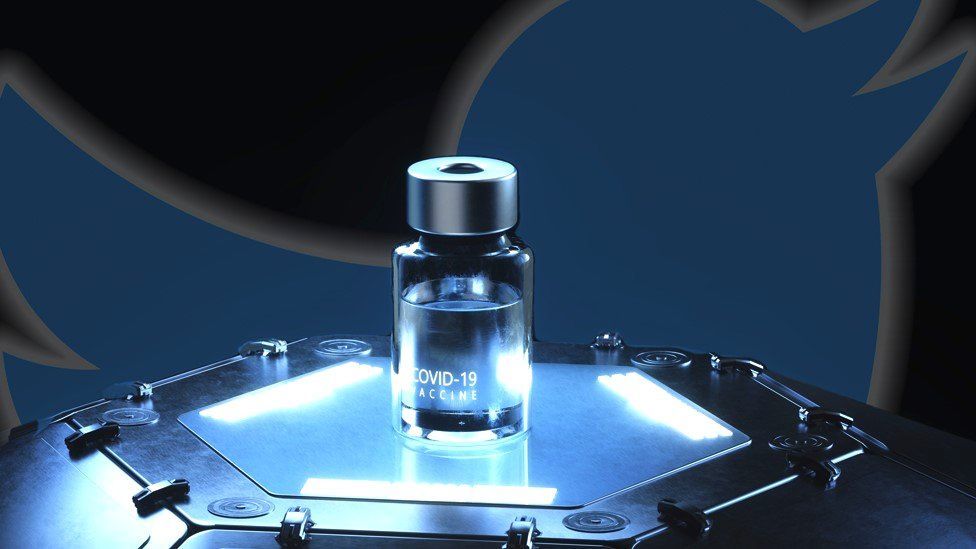 Under the scheme, members will face a lock being placed on their account. Its duration will be determined by how many times they have posted misleading information about the jabs.

If they accrue "five strikes", they face a permanent ban.

Anti-disinformation campaigners say the success of the initiative now depends on how strictly Twitter enforces it.

The move brings the social network in line with several of its rivals.

Facebook and Instagram announced their own pledge to close the accounts of repeat offenders a month ago.

And YouTube already operates its own three-strikes system, which was extended in October to cover claims about vaccines that contradict "expert consensus".

Twitter also said it would begin applying labels to tweets that it believes "may contain misleading information" about Covid-19 vaccines, that it has not deemed to be serious enough to warrant removal.

Its rules and policies guide is not definitive about how it will determine what action to take.

But it indicates it will delete posts that invoke a "deliberate conspiracy" by malicious forces and/or that claim vaccines are an "intentional attempt to cause harm".

And it will label those that only contain misleading information about the safety of the treatments, or that make other debunked claims about adverse impacts.

Posts that question the effectiveness of the jabs but do not misrepresent research findings will be neither removed nor labelled, the guide adds.

The five-strikes system is a bit more complicated than it sounds as different offences merit different penalties:

Based on this, users face being locked out of their account once they get two strikes or more with:

*  two and three strikes both leading to a 12-hour suspension

*  five strikes or more leading to a permanent ban

In a blog, Twitter added that it had removed more than 8,400 tweets to date for breaking its earlier Covid-19 rules.

But one group said the US firm had done "less than the bare minimum" to tackle anti-vaccination posts.

"The anti-vaxx industry comprises a small number of highly active, well-resourced accounts, producing industrial levels of disinformation, most of which are still up and tweeting," said Imran Ahmed, chief executive of the Center for Countering Digital Hate think tank.

"When misinformation is reported to them using their own reporting tools, we know little is done in practice.

"Last year we reported dozens of posts containing Covid misinformation in partnership with youth charity, Restless Development. Fewer than one in 20 misinformation posts actually had action taken against them."

Since the beginning of the pandemic, conspiracy influencers have grown huge followings on social media by repeatedly sharing falsehoods about vaccines.

I investigated the boom in the following of accounts promoting anti-vaccine content on Twitter for BBC Panorama - exposing the harm it had caused to communities across the UK.

Vulnerable people I interviewed were scared off the vaccines by the latest tactics of a committed minority of activists, who use Twitter and other platforms.

Twitter has repeatedly committed to tackling harmful misinformation - but it will take some time to see whether this updated strike system results in those repeat offenders having their accounts removed.

While many of those influencers sharing vaccine mistruths in the UK have already been suspended from the site, accounts of those in the US - central to this disinformation ecosystem that repeatedly distorts stories about the vaccine - remain live at this time.