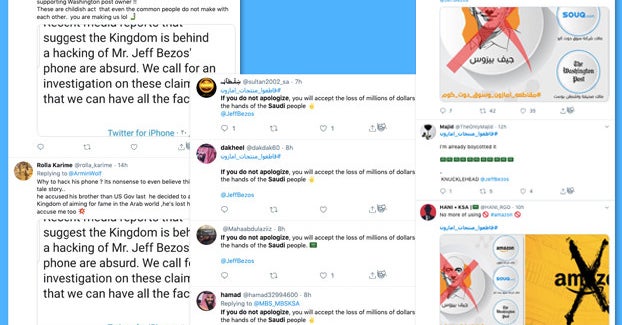 A UN official said the goal is “intimidating, creating fear, and ultimately controlling or silencing.”

Those findings raise questions about whether Twitter, which has carried out at least three mass suspensions of pro-Saudi propaganda networks since 2018, has done enough to clear the site of coordinated misinformation.

“Twitter needs to do more to allow people to be able to verify their accounts and assure people that they are at least real people. And build [the company’s] awareness of Arabic Twitter, and non-English Twitter,” Jones told BuzzFeed News. “They treat it like a Wild West.”

In a statement given yesterday, a Twitter spokesperson defended the site’s actions: “In December, we disclosed a state-backed operation of approximately 90,000 accounts that we proactively removed from Twitter, all of which originated in Saudi Arabia. We continue to take aggressive enforcement action to remove platform manipulation across the service. When we reliably attribute these behaviors to state actors, we will lead with transparency as a matter of principle, disclosing them in full to our public archive - the largest of its kind in the industry.”

Jones’ findings came as the United Nations Office of the High Commissioner for Human Rights issued a call for an investigation of the Bezos hack, which included more information on pro-Saudi propaganda spread on Twitter.

And the copy and paste, Saudi trolling of @JeffBezos also begins ... pic.twitter.com/ANiliMLjys

“The hacking and the campaign are two actions taking place alongside each other, both of which aim, in my view, at intimidating, creating fear, and ultimately controlling or silencing the people who are the object of both hacking and the campaign,” Agnès Callamard, UN special rapporteur on summary executions and extrajudicial killings, told BuzzFeed News.

The online campaign against Bezos and the Washington Post was first uncovered by NBC News two weeks after Jamal Khashoggi, a Saudi Arabian dissident and columnist for the paper, was murdered at the Saudi consulate in Istanbul on Oct. 2, 2018. It consisted of over 100,000 tweets calling for a boycott of Amazon and identifying Bezos as the owner of the Washington Post. That hashtag trended in Saudi Arabia at the time, propelled by a mix of both genuine and bot-like tweets.

“At a time when Saudi Arabia was supposedly investigating the killing of Mr. Khashoggi, and prosecuting those it deemed responsible, it was clandestinely waging a massive online campaign against Mr. Bezos and Amazon targeting him principally as the owner of the Washington Post,” the UN Office of the High Commissioner for Human Rights said in a statement on Jan. 22.

After NBC News reported on the campaign in October 2018, Twitter removed the accounts. According to research from NBC News and Josh Russell, an independent investigator, hundreds of accounts tweeted pro-Saudi messages. The accounts also spread rumors about Khashoggi’s killing and praised the king of Saudi Arabia, Salman bin Abdulaziz al-Saud.

Despite Twitter’s suspensions, the online campaign continued until April 1, 2019, according to the UN. During Mohammed’s appearance on 60 Minutes on Sept. 20, for example, there were coordinated efforts to heap praise on the crown prince, according to Russell. The campaign ended abruptly after the Daily Beast published allegations that Bezos’ phone had been breached on March 31, 2019.

Callamard stressed that the UN is only making a circumstantial link between the hacking and the disinformation campaign, but said the timing and similarities are notable, adding that Saud al-Qahtani, an adviser to Prince Mohammed, may have been involved in both campaigns.

“One person in particular has been associated with the online campaign against dissidents and Mr. Bezos - it's Saud al-Qahtani,” she said. “He is again named in relation to the allegations [...] regarding the hacking of Mr. Bezos. So there seem to be similar people being involved in both the hacking and in the campaign.”

Since 2018, Twitter has carried out at least three mass suspensions of pro-Saudi accounts. In September 2019, the company announced it had removed 5,000 accounts from its platform for “inauthentic behavior,” including one belonging to Saud al-Qahtani. In December, it nixed another 88,000 accounts, saying they were associated with “a significant state-backed information operation on Twitter originating in Saudi Arabia.”

“If you do not apologize, you will accept the loss of millions of dollars at the hands of the Saudi people,” dozens of accounts tweeted at Jeff Bezos alongside an Arabic hashtag that translates as “Boycott Amazon.”

Callamard, also the director of Columbia University's Global Freedom of Expression project, said platforms have a responsibility to respond to online propaganda campaigns.

“There is nothing organic about them. It's manipulated. It's man-made. And it serves purposes other than the free flow of information,” she said. “So, in my opinion, when a social media platform is confronted with something that is clearly organized, clearly motivated by objectives other than the free flow of information, it is incumbent upon them to take action to rebalance the information flow.”