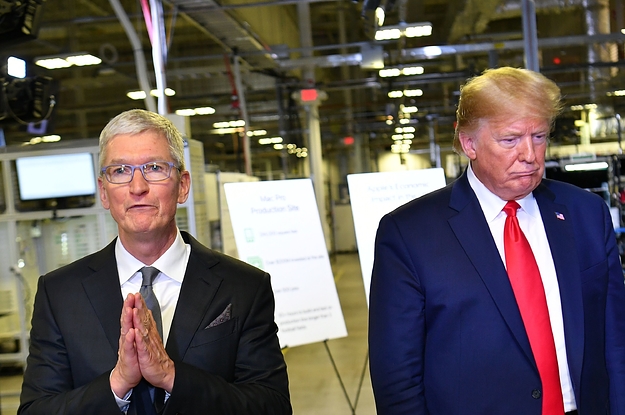 As Trump Expands His Travel Ban, Amazon, Apple And Google Are Silent

In January 2017, when the Trump administration first unveiled a travel ban targeting seven majority Muslim countries, the tech industry took up arms. This time around there's mainly been silence.

In January 2017, when the Trump administration first unveiled a travel ban targeting seven majority Muslim countries, the tech industry took up arms. CEOs wrote impassioned letters, a billionaire founder showed up to an airport protest, and multiple companies lent their voices to lawsuits challenging the policy.

Last week, however, following the announcement of immigration restrictions on six additional countries, the reaction could not have been more different. Silicon Valley largely fell silent.

On Friday, the Trump administration said it would be barring immigrant visas for individuals from Nigeria, Kyrgyzstan, Myanmar, and Eritrea, while also suspending diversity visas -which grant green cards to people from countries with low levels of immigration to the US -for Sudan and Tanzania. The changes, which go into effect on Feb. 22, are expected to affect as many as 12,400 visa applicants and were put in place because the countries failed to meet minimal security and information-sharing standards, according to officials.

As the tech industry has warmed to the Trump administration -with CEOs hosting photo ops with the president or attending secret dinners at the White House -its leaders’ responses to the ban extension have varied dramatically from 2017. There were no tweets. No all-hands memos or meetings. No forceful statements on Facebook. No threats of legal action.

Historically, the tech industry has made immigration one of its leading political causes. Companies including Apple, Amazon, and Google were cofounded by immigrants or the children of immigrants, while startups to trillion-dollar goliaths rely on worker visas to stock their ranks. In January 2017, when asked why he was attending a protest of President Trump’s policy at the San Francisco International Airport, Google cofounder Sergey Brin gave a simple response: “I’m here because I’m a refugee.”

This time around, Google, whose CEO, Sundar Pichai, hails from India, did not respond to a request for comment. Late last year, BuzzFeed News reported that the company hired a former Department of Homeland Security official who had publicly defended a version of the travel ban for the administration and later worked on the policy of family separation at the southern border.

Amazon, whose CEO, Jeff Bezos, was raised by a Cuban immigrant, declined to comment. Apple did not respond to a request for comment. One company said there was no need to issue a statement because the ban was “more limited in scope” and had not impacted its employees.

“As we have said regarding earlier efforts to limit immigration on a country-specific basis, we believe that as a nation of immigrants we all benefit from welcoming people from around the world to live here, work here, and contribute to our society,” a Facebook spokesperson told BuzzFeed News on Monday. They also pointed to a 2017 post by CEO Mark Zuckerberg in which he noted his concern with “the recent executive orders signed by President Trump.” The issue of immigration was “personal for me,” Zuckerberg said then, because of his Polish, Austrian, and German heritage.

While Twitter CEO Jack Dorsey has not tweeted in opposition to the new policy, as he did in 2017, a company spokesperson noted that the company depended on “an international, vibrant workforce.” Late last year, Dorsey visited Nigeria and said that he wanted to live in Africa in the future.

“We believe decisions such as this have the potential to harm US competitiveness and credibility on the global stage,” the Twitter spokesperson told BuzzFeed News on Monday.

Microsoft, which had no employees affected by the recent travel ban extension, responded on Monday after questions from BuzzFeed News.

“While our country must ensure security for its citizens and residents, we’re concerned when immigration policies create restrictions for entire countries,” a company spokesperson said. “We need to make sure our nation remains a magnet for the world's best and brightest.”

A few companies issued statements immediately after the Trump administration’s announcement, among them Postmates CEO Bastian Lehmann, who said on Friday that the “news of an expanded travel ban by an the Administration that prioritizes borders over creed is a shameful overeach of bigotry and elevates the Muslim Ban to new heights of hate.”

“Given Airbnb’s very purpose is to facilitate people to people belonging, as a company and a community, we objected to the original travel ban and continue to believe such policies are in opposition to our purpose,” Airbnb wrote on a company blog last Friday. “We believe that you should be able to travel to, and live in any community around the world, regardless of your race, religion or ethnicity – that the power to travel makes us all better.”

Those statements were the exception. Other companies that did not respond to BuzzFeed News’ request for comment on the travel ban included Salesforce -whose CEO, Marc Benioff, recently spent part of January hobnobbing with Ivanka Trump in Davos, Switzerland, at the World Economic Forum. Spokespeople for Tesla and SpaceX, both led by Elon Musk, an immigrant from South Africa, also did not respond.

Following the publication of this story, ride-sharing company Lyft said, "The recent expansion of the immigration ban is antithetical to Lyft's values." A spokesperson for its competitor Uber noted that "policies such as these move us all in the wrong direction."

Friday’s announcement came within a week of the three-year anniversary of the original travel ban, which has partly survived legal challenges to place restrictions on people from Iran, Libya, North Korea, Somalia, Syria, Venezuela, and Yemen.

BuzzFeed News previously reported on a draft of the latest presidential proclamation, which detailed how the administration conducted reviews of the “identity management” and security protocols for 200 countries that led to its decision.

Postmates' Lehmann, who is from Germany, fundamentally disagreed with that move. “As an immigrant myself, I know turning our backs on the values and countries that our citizens & neighbors hail from, runs counter to America and risks undermining our competitive prosperity," he said.