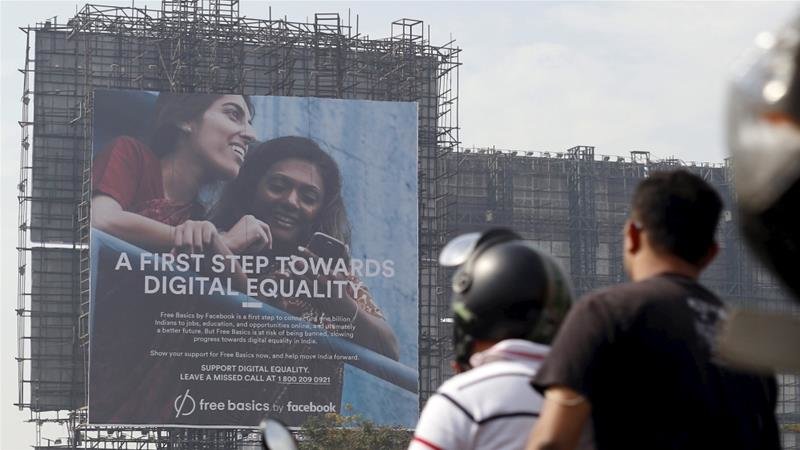 It's time to talk about Silicon Valley as an imperial force and what has to be done to resist its power.

Silicon Valley corporations are taking over the digital economy in the Global South, and nobody is paying attention.

In South Africa, Google and Facebook dominate the online advertising industry, and are considered an existential threat to local media. Uber has captured so much of the traditional taxi industry that drivers have been petrol bombed in the "South African taxi wars". Similar battles have broken out in Kenya.

Meanwhile, Netflix is not only pulling subscribers away from local television services, they are buying up content in Africa. The streaming giant is now the number one source of Internet traffic across the world.

In India, Facebook was forced to cancel its "Free Basics" programme that gave the social media giant control over the Internet experience on mobile phones. Indians protested that the service deepened Facebook's monopoly power and subjected them censorship and surveillance. Nevertheless, Facebook is expanding in most countries, including India, and Free Basics is active in over sixty countries. Through the project, Facebook has retained its influence in countries like Kenya and Ghana.

What is going on?

Big Tech corporations are wreaking havoc on the Global South. There's a crisis in the tech ecosystem, and it's called digital colonialism.

What is digital colonialism?

Under classic colonialism, Europeans dispossessed native peoples of their land, exploited their labour, exercised extraterritorial governance, and perpetuated dependency and plunder through strategic underdevelopment. Corporations like the East India Company played a pivotal role in this process. In their pursuit of profit and power, Europeans took ownership and control of critical infrastructure, including ports, waterways, and railroads.

Under this arrangement, imperial powers designed railways for plunder by foreign empires: They bypassed the villages of the indigenous populations and linked up commercial and military outposts to the sea ports. Native peoples were exploited to extract raw materials, which were sent back to Europe for manufacturing. Surplus European products would then flood the colonies, undermining the indigenous population's ability to develop its own local industries. Colonial powers deployed this infrastructural domination across their vast empire.

Similar to the technical architecture of classic colonialism, digital colonialism is rooted in the design of the tech ecosystem for the purposes of profit and plunder. If the railways and maritime trade routes were the "open veins" of the Global South back then, today, digital infrastructure takes on the same role: Big Tech corporations use proprietary software, corporate clouds, and centralised Internet services to spy on users, process their data, and spit back manufactured services to subjects of their data fiefdoms.

For example, Google siphons user data from a variety of sources - Google Search, Maps, Ads, Android location services, Gmail - to provide them with one of the richest collections of information on the planet. Through the Open Handset Alliance and proprietary control of their "killer apps", they ensure the world's data flows into their corporate cloud. They then process the data for consumer and business services.

Thus, tech corporations have expanded their products across the globe, extracting data and profit from users all around the world while concentrating power and resources in one country, the US (with China a growing competitor).

Poorer countries are overwhelmed by readily available services and technology, and cannot develop their own industries and products that compete with Western corporations. They are also left unable to protect their people from exploitation.

Can Big Tech be held accountable?

Control over how technology works forms the foundation of digital colonialism. Software is often proprietary, which means that users cannot read, modify, or share the source code. This prevents them from understanding and controlling how their computers work.

The public cannot hold Big Tech corporations accountable if they cannot take direct action to change how their software works.

It is for this reason that American software programmer Richard Stallman started advocating for Free and Open Source Software in the early 1980s. "A nonfree program is a yoke, an instrument of unjust power," Stallman reasoned.

People should be given the freedom to control their computers, which requires them having access to software source code - the set of instructions that tells your computer what to do.

Free Software licenses are written to invert the authoritarian power of proprietary software: They secure the user's freedom to use, study, modify, and share the software. They keep software free and open for everyone and enable accountability.

For example, Microsoft configures its Windows operating system to spy on its users. If it were not under the proprietary control of Microsoft, computer hacktivists would surely strip out its spying services and release a modified, "spy-free" version of Windows for the public.

However, Free Software alone is not enough to protect the public interest because in recent years, surveillance capitalism has given rise to centralised Internet services outside of user control. Platforms like Facebook function as "information intermediaries" which stand between end users. Want to send a picture to a friend? You send it to Facebook first, and then your friend downloads it from Facebook.

With the shift to centralised services run by corporate giants, the surveillance of users sky-rocketed. Cloud computing plays a key role. While Free Software creates accountability for software running inside your own device, it cannot produce accountability for cloud services run by corporations. This is because the software is running on someone else's computer (Facebook, Google, etc). Corporate clouds dispossess the people of the ability to control their computers.

Cloud services provide petabytes of information to corporations, who use the data to train their artificial intelligence systems. AI uses Big Data to "learn" - it requires millions of pictures to "understand" how to recognise, say, the letter "A" in its different fonts and forms. In this sense, "data is the new oil".

When applied to humans, the sensitive details of people's personal lives become an incredibly valuable resource that tech giants are incessantly trying to extract.

"Feedback effects" of Big Data make the situation worse: Those who have more and better data can create the best artificial intelligence services, which attracts more users, which gives them even more data to make the service better, and so on.

Add to this the fact that the Internet is universal and platforms are not easy to restrict without draconian censorship tools like the "Great Firewall" of China, and we have a situation where Silicon Valley is concentrating power at the global level.

American Big Tech companies are just as dominant outside of the US as they are inside of it. And with US markets relatively saturated, they are seeking to colonise emerging markets.

Microsoft and Google, for example, are investing in efforts to place their software in Global South classrooms through programmes like Microsoft Partners in Learning and Google Classroom. This hooks young people into their products from an early age, and biases Global South software developers towards their software ecosystems.

Big Tech corporations are also building their own server farms in foreign countries to capture emerging markets and shift them towards the Silicon Valley model of a centralized cloud economy.

Some commentators maintain that for all the problems of Big Tech, they offer valuable services. A common trope is that Facebook "connects the world's users". Using the same logic, people still praise the British for providing colonial subjects with railroads. The obvious point is that these systems were designed for domination, when they could have been built to benefit local communities.

At the same time, countries in the Global South are less able to protect their people from exploitation. Countries with power - the United States, the EU states, Australia - are the ones calling the shots on Big Tech companies.

This poses a problem: Users around the globe are being subjected to the norms set by US-based companies. "Code is law" in the sense that computer code constitutes privatised regulation binding all users. If YouTube wants to block, say, the sharing of content protected by fair use, there's not much that foreign jurisdictions can do.

The same goes for speech regulation, content moderation, and freedom of association: The major social networks use algorithms and employee rulebooks to censor content, shape what people see in news feeds, and determine which activist and other social groups people are allowed to form on their platforms.

This means that users outside of the US are under the de facto extraterritorial governance of Silicon Valley.

What can the Global South do?

If a system is designed for exploitation and control, then it needs to be changed. Railroads are great, but bypassing local villages for imperial power is not. If you want to stop exploitation and surveillance, you have to redesign these systems.

A movement to combine Free and Open Source Software with tools to re-decentralise the Internet is attempting to do just that. In 2010, Columbia Law Professor Eben Moglen announced the FreedomBox project: Free Software that turns computer devices into personal servers that provide the technology needed to run cloud services without a middle-man in control.

FreedomBox can host decentralised social networks like Mastadon or GNU Social as well as email and messenger services. It builds in the option for Tor onion routing to protect your privacy and allows you to store your data on your home device - and access it on the go.

The FreedomBox project incorporates major contributions from core developers Sunil Adapa and Joseph Nuthalapati. Over the past few months, they worked with NGO Swecha to successfully implement FreedomBoxes in twelve Indian villages.

The project uses old devices to offer WiFi connectivity to villagers while providing them decentralised services and blocking surveillance. The FreedomBox project is expanding to other villages, and it is open-sourced and built for replication across the world.

Initiatives like India's FreedomBox should be developed and scaled up. In a feasibility study, researchers at MIT found that Internet re-decentralisation is workable from a technological standpoint. There are challenges, to be sure. Development is under-funded and getting millions of people to use new services could be difficult, but it is not impossible and its cost outstrips its benefits by far.

Tech that is Free and Open Source, interoperable, and decentralised can be built so that no institution anywhere in the world could own or control it. This would alleviate many problems of territorial jurisdiction. Adding in new legal tools to complement an overhaul of the digital ecosystem would further strengthen digital rights.

Fighting digital colonialism is important not only from the perspective of privacy and individual user rights. At a time where the global divide is threatening the environment and with it, our very survival, we cannot afford to further concentrate wealth and power. We must ensure that technology will serve the world's people, not the interests of the one percent.

As the Vice Chancellor of Wits University in South Africa warned, "Considerations of [technological innovations] have not even entered the public discourse and we are at a collective risk of once again merely being victims of economic forces and processes beyond our control." Exceptions notwithstanding, few are contemplating how this actually works.

It's time to talk about Silicon Valley as an imperial force, and take seriously the fundamental changes needed to stop digital colonialism.