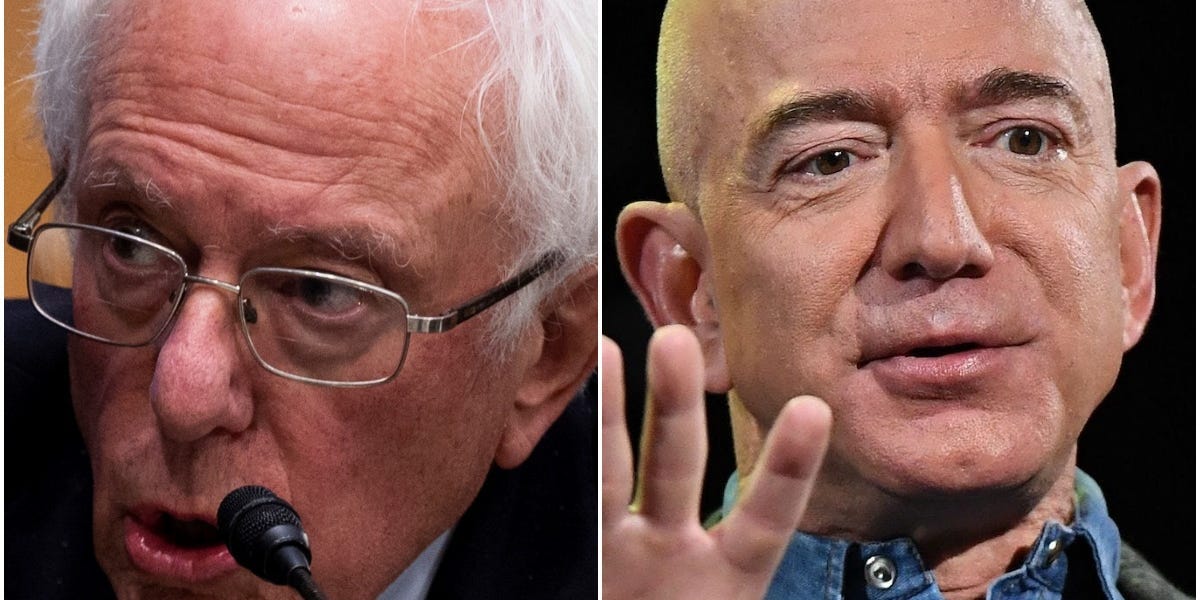 Bernie Sanders rips into Jeff Bezos: 'You are worth $182 billion ... why are you doing everything in your power to stop your workers' unionizing?

Jeff Bezos declined to testify at the hearing on income inequality, which included testimony from a pro-union Amazon worker in Alabama.

At a hearing on Wednesday morning, Sen. Bernie Sanders spoke critically about Amazon CEO Jeff Bezos, who declined Sanders' invitation to testify, and Elon Musk, the two wealthiest men in the world.

"Bezos and Musk now own more wealth than the bottom 40%. Meanwhile, we're looking at more hunger in America than at any time in decades," Sanders said in his opening remarks at the Senate Budget Committee hearing, which was titled The Income and Wealth Inequality Crisis in America.

"If he was with us this morning, I would ask him the following question ... Mr. Bezos, you are worth $182 billion, that's a 'b,'" Sanders said. "$182 billion, you're the wealthiest person in the world. Why are you doing everything in your power to stop your workers in Bessemer, Alabama from joining a union?"

The unionization push currently being voted on at Amazon's Bessemer, Alabama fulfillment center has been the focal point for a high-profile labor dispute between the behemoth "everything store" and the Retail, Wholesale and Department Store Union. Amazon has aggressively pushed its workers to vote against unionization, launching a campaign called "Do it Without Dues" to encourage workers to stick to the status quo.

Sanders pointed out the disparity between Bezos' wealth growth during the pandemic and the struggles of rank-and-file workers.

"Jeff Bezos has become $77 billion richer during this horrific pandemic, while denying hundreds of thousands of workers who work at Amazon paid sick leave," he said.

"Amazon brags it pays workers above the minimum wage," she said. "What they don't tell you is what those jobs are really like. And they certainly don't tell you what they can afford."

"And not just at the Amazon in Bessemer," she added, "but all over the country."

"We take employee feedback seriously, including Ms. Bates's, but we don't believe her comments represent the more than 90% of her fulfillment center colleagues who say they'd recommend Amazon as a great place to work to friends and family," an Amazon spokesperson told Insider. "We encourage people to speak with the hundreds of thousands of Amazon employees who love their jobs, earn at least $15 an hour, receive comprehensive healthcare and paid leave benefits, prefer direct dialogue with their managers, and voted Amazon #2 on the Forbes best employers list in 2020."

While much of the hearing was devoted to the Amazon unionization fight, which will be decided at the end of March, Sanders pointed out that "Amazon and Jeff Bezos are not alone" and decried the "corporate greed" that drives income inequality.

Others testifying at the hearing included former Labor Secretary Robert Reich, who cited the importance of unions and the steep decline in union membership since the labor heyday of the mid-1900s.

Sanders has been a vocal critic of Amazon, while Joe Biden has taken a softer approach in referencing the union drive. In a statement earlier in March, Biden condemned "anti-union propaganda" from large companies, but stopped short of explicitly naming Amazon.