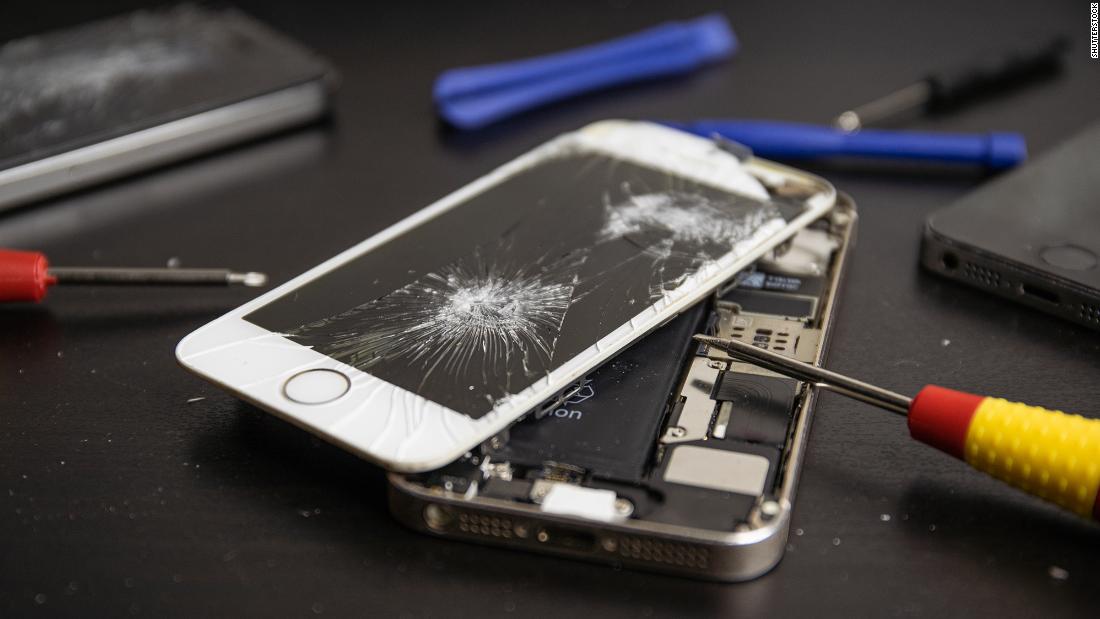 Biden's executive order takes on right-to-repair. It could make fixing your smartphone easier

Your smartphone breaks. The repair costs too much money. So you give up and buy a new device.

That this happens so often is no coincidence.

Many big device manufacturers have increasingly designed products to make them difficult to repair without specialized equipment and instructions — and have limited the authorized repair shops where customers can access such repairs without compromising their device's warranty. On top of being annoying and costly for consumers, not to mention bad for the environment, some critics claim these practices are anticompetitive because they limit independent repair shops' access to consumers.

It's not just consumer tech devices. Makers of everything from tractors to hospital equipment have been accused of similar tactics. In recent years, some manufacturers have taken steps to make repairs easier, but there's a growing effort globally to push them to do more. Last week, the "right-to-repair" movement got a big boost from the White House.

President Joe Biden on Friday signed a sweeping executive order aimed at promoting competition in the US economy. It includes a provision directing the Federal Trade Commission to issue rules preventing manufacturers from imposing restrictions on independent device repair shops and DIY repairs. While cellphone makers aren't the only ones facing criticism for obstructing repairs, the order specifically calls them out for practices that make repairs "more costly and time consuming."

The order won't be an immediate fix, since the FTC still has to act on Biden's recommendation. But there are signs that could happen soon.

The FTC in May released a 56-page report on the repair market. It concluded that "many consumer products have become harder to fix and maintain" because repairs require special tools, diagnostic software and parts that manufacturers restrict access to, often forcing consumers to "replace products before the end of their useful lives."

At least 27 states have also considered right-to-repair legislation. Last month, the New York Senate became the first legislative body to pass such a bill, although it still needs approval by the state Assembly and the governor's signature to become law. Foreign governments — including in the European Union and Australia — have also recently thrown their weight behind the issue. Even Apple co-founder Steve Wozniak has supported this push.

Wozniak said he believes that companies inhibit third-party repairs "because it gives the companies power, control over everything."

"It's time to recognize the right to repair more fully," he said during a video appearance last week.

Restricting access to repairs is, in many ways, a smart moneymaking strategy for device manufacturers because it can lead consumers to shell out for new devices more frequently rather than fixing old ones.

Apple, for example, faced blowback over hurdles to accessing iPhone repairs following revelations about its former practice of deliberately slowing down older phones to extend their battery life. In the wake of "batterygate," Apple significantly lowered the price of battery replacements, effectively eliminating one key factor for people to replace their devices. CEO Tim Cook later partly blamed the cheaper batteries for lagging iPhone sales in early 2019.

For their part, tech companies say that keeping repairs in-house or limited to certain approved partners helps protect consumers' privacy and the security of their devices, and ensures high quality repairs. They also say that trade-in and recycling programs prevent old devices from ending up in the trash.

"We believe the safest and most reliable repair is one handled by a trained technician using genuine parts that have been properly engineered and rigorously tested," Apple COO Jeff Williams said in a 2019 release announcing Apple's independent repair shop partner program.

Although the ubiquity of Apple's devices has made it something of a poster child for the issue, Microsoft (MSFT), Samsung (SSNLF), and others would also be affected by new right-to-repair rules.

Samsung and Apple did not immediately respond to a request for comment on the Biden executive order; Microsoft declined to comment.

The case for right-to-repair

Right-to-repair advocates such as repair guide maker iFixIt say that once a consumer pays for a smartphone or a computer, there shouldn't be limits on what they can do with it.

While it's unclear exactly how new rules from the FTC would take shape, advocates want manufacturers to make devices longer-lasting, and to supply parts and detailed manuals to anyone. Such practices could give consumers more options for where to get a device fixed and also lead to more competitive pricing.

The FTC report also found that "the burden of repair restrictions may fall more heavily on communities of color and lower-income communities," because many independent repair shops are owned by people of color and because high-cost repairs hit low-income consumers harder.

Beyond that, making fixes more accessible would likely extend a device's life, which in turn could help reduce carbon emissions. With the iPhone 12, for example, 83% of the emissions generated by the device's life cycle come from production, according to an Apple environmental report.

The growing momentum behind right-to-repair is "good for every American — farmers, hospital administrators, you and me — who buys expensive products that are difficult to fix," said Nathan Proctor, senior right-to-repair campaign director at advocacy group US PIRG.