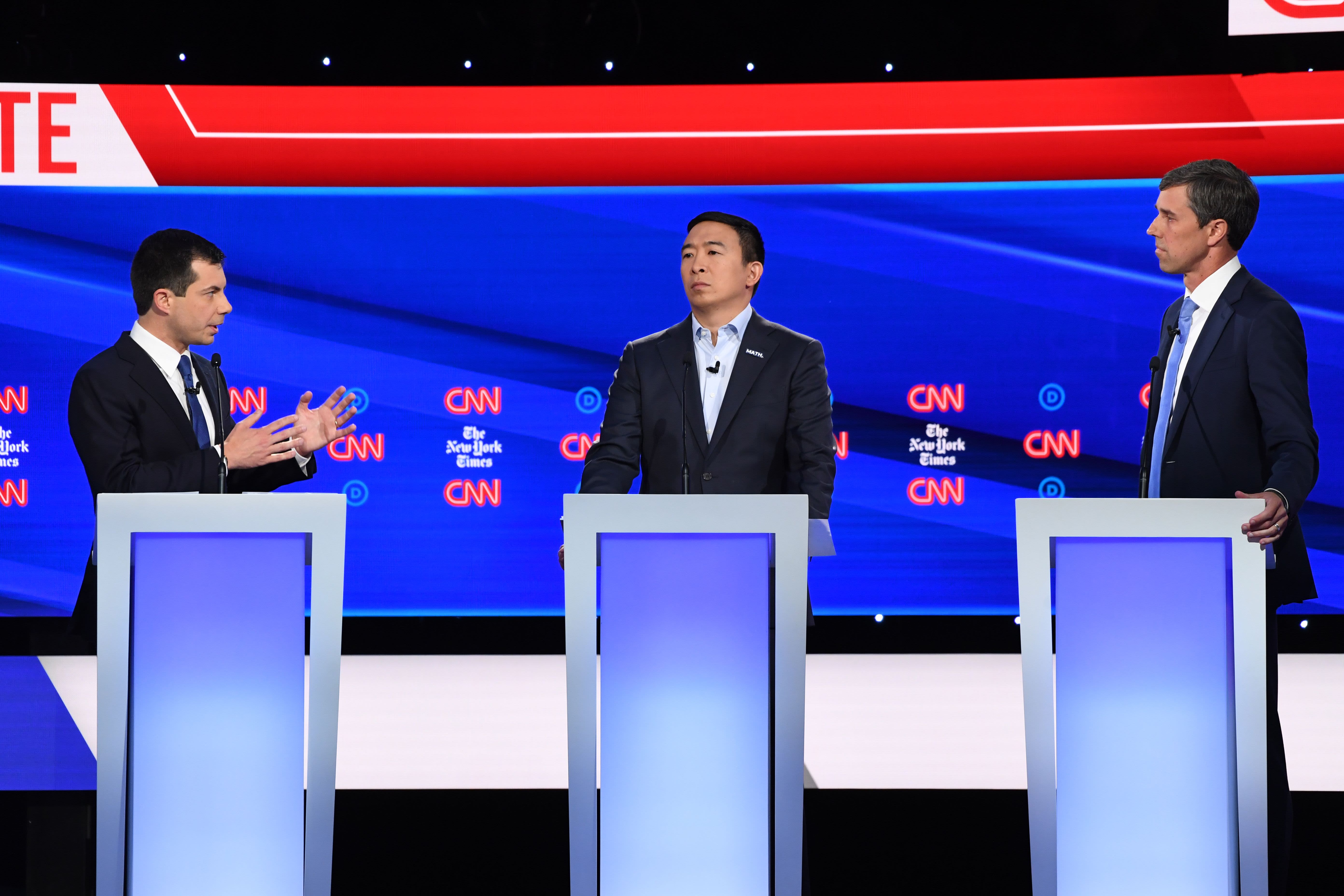 Big Tech had its first big debate moment, and Democrats came out swinging

The presidential candidates agreed that tech consolidation is an issue, but not all agreed to go as far as a break up.

Presidential candidates at the Democratic debate Tuesday night were asked about how tech companies should be regulated, if at all.

Warren’s plans to “break up Big Tech” have steered much of the conversation around how to deal with the industry.

The presidential candidates agreed that tech consolidation is an issue, but not all agreed to go as far as a break up.

Big Tech had its first big moment in the 2020 presidential election during Tuesday night’s Democratic debate.

The big question from the debate moderators: Do the largest tech companies need to be broken up?

Massachusetts Sen. Elizabeth Warren’s call to break up Facebook, Amazon, Google and Apple framed much of the discussion around tech regulation. While each candidate who responded to the question agreed that unregulated power of these large firms poses a problem, few committed as firmly to break them up.

Here’s how each candidate answered the question of how Big Tech companies should be regulated:

Andrew Yang, an entrepreneur himself, has been something of a darling to Silicon Valley tech workers. The top three groups of contributors to his campaign are employees from Google parent company Alphabet, Amazon and Microsoft. But even Yang said the tech industry deserves more oversight.

“As usual, Senator Warren is 100% right in diagnosing the problem,” Yang said at the debate. “There are absolutely excesses in technology and in some cases having them divest parts of their business is the right move. But we also have to be realistic that competition doesn’t solve all of the problems.”

Yang said no one “wants to use the fourth-best navigation app” and that breaking up Big Tech companies won’t necessarily “revive main street businesses around the country.” Antitrust action also won’t solve health problems that are correlated with children’s early exposure to technology, Yang said.

Yang suggested that the current antitrust framework, developed in the 20th century, is not adequate to deal with today’s industries.

“We need new solutions and a new toolkit,” he said.

Later in the debate, Yang proposed an alternative solution to giving consumers more power in comparison to Big Tech companies.

“The best way we can fight back against big tech companies is to say our data is our property,” Yang said. “Right now, our data is worth more than oil. How many of you can remember getting your data check in the mail? It got lost, it went to Facebook, Amazon, Google. If we say this is our property and we share in the gains, that’s the best way that we can balance the scales against the Big Tech companies.”

Warren’s rhetoric around the Big Tech companies has steered much of the conversation around how to regulate the industry. The senator came out with her plan to “break up Big Tech” back in March and announced prior to the debate Tuesday that she would not accept donations from Big Tech executives over $200, widening the pool of donors from which she won’t accept large contributions. Warren has also said she won’t take large donations from executives at big banks, Big Pharma or fossil fuel companies.

“You can’t go behind closed doors and take the money of these executives and then turn around and expect that these are the people who are going to actually finally enforce the laws,” Warren said on the debate stage.

Addressing her stance on Big Tech, Warren used Amazon as an example, saying the company “runs the platform, gets all the information, and then goes into competition with those little businesses. Look, you get to be the umpire in the baseball game or you get to have a team, but you don’t get to do both at the same time. We need to enforce our antitrust laws, break up these giant companies that are dominating Big Tech, Big Pharma, Big Oil, all of them.”

One area where Warren did not push as hard on tech was over Twitter’s decision to keep President Donald Trump’s tweets and account on the platform. Asked by Sen. Kamala Harris, D-Calif., why Warren didn’t join her call for Twitter to suspend his account, Warren said, “I don’t just want to push Trump off Twitter, I want to push him out of the White House.”

Addressing her call for Twitter to suspend Trump’s account, Harris said it is “a grave injustice when rules apply to some but not to all, and in particular when the rules that apply to the powerless don’t apply to the powerful.” Harris wrote a letter to Twitter’s CEO earlier this month requesting he consider suspending Trump’s account for allegedly attempting to “target, harass” and “out” the whistleblower who made Trump the subject of an impeachment inquiry.

Harris separately addressed a question about Facebook CEO Mark Zuckerberg’s claim that splitting up large tech companies would make it harder for those companies to tackle problems like disinformation around elections.

Sen. Amy Klobuchar, D-Minn., pointed out her position as the ranking member on the Senate Antitrust Subcommittee, which has been heavily involved in the conversation around Big Tech by questioning tech executives about their practices as well as the agency heads investigating the large tech firms. Klobuchar said that in her private sector experience representing companies trying to enter the telecom market, she saw prices go down in the long distance market once more competition was introduced. She called the current moment “another Gilded Age.”

Klobuchar suggested taking a different approach to the antitrust conversation, however.

“Start talking about this as a pro-competition issue,” Klobuchar said. “This used to be a Republican and Democratic issue, because America, our founding fathers, actually wanted to have less consolidation, we were a place of entrepreneurship.”

Sen. Bernie Sanders, D-Vt., seemed to take a similar stance to Warren on the debate stage, condemning the consolidation of industries including not just tech but also finance and media.

“We need a president who has the guts to appoint an attorney general who will take on these huge monopolies, protect small business and protect consumers by ending the price fixing that you see every day,” Sanders said.

Beto O’Rourke said the key to tech regulation is treating companies like publishers rather than utilities. The former Texas congressman pointed to the false ad Warren recently ran on Facebook to see how far the company would go in refusing to fact check ads by politicians.

“We would allow no publisher to do what Facebook is doing, to publish that ad that Senator Warren has rightfully called out, that CNN has refused to air because it is untrue and tells lies about the Vice President,” O’Rourke said. “Treat them like the publisher that they are, that’s what I will do as president.”

O’Rourke said he would “be unafraid to break up big businesses if we have to do that,” but made a subtle jab at Warren by saying he doesn’t believe “it is the role of a president or a candidate for the presidency to specifically call out which companies will be broken up. That’s something that Donald Trump has done in part because he sees enemies in the press and wants to diminish their power, it’s not something that we should do.”

Sen. Cory Booker, D-N.J., said the problem with tech is not just potentially anticompetitive behavior, but also how it is used “to undermine our democracy.”

“We have a reality in this country where antitrust from pharma to farms is causing trouble. And we have to deal with this,” Booker said. “As president of the united states I will put people in place that enforce antitrust laws.”

Former Secretary of Housing and Urban Development Julian Castro did not specify how he would tackle the Big Tech companies but said he believes “that we’re on the right track in terms of updating how we look at monopolistic practices.”

Castro said, “We need to take a stronger stance when it comes to cracking down on monopolistic trade practices, and that’s what I would do as president.”

Billionaire entrepreneur Tom Steyer said he agrees with Warren that “monopolies have to be dealt with,” but left regulation open as an alternative to a break up. Steyer said that to beat Trump, candidates must focus not only on how it will break up businesses, but also how it will help the economy grow in other positive ways.