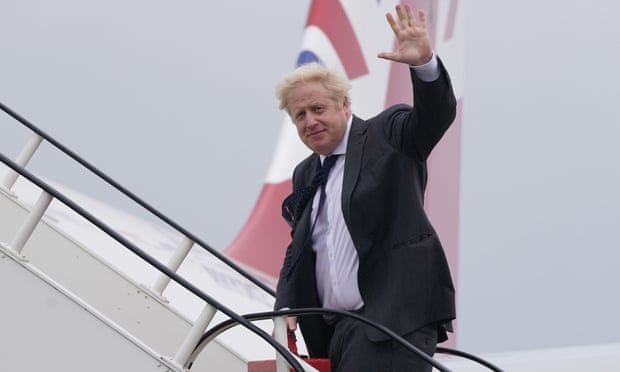 PM is making three-day trip during which he will give speech to UN general assembly and hold talks with Joe Biden at White House
Boris Johnson plans to press Amazon boss Jeff Bezos on the tech giant’s tax record when the pair meet face to face in New York on Monday, Downing Street has said.

The prime minister will meet Bezos as part of a three-day trip to New York and Washington, where Johnson will address the UN general assembly and hold talks with the US president, Joe Biden, and his deputy, Kamala Harris, at the White House.

After setting out contingency plans for coping with 1Covid1 in England this winter, and conducting a ruthless reshuffle of his top team, Johnson hopes to switch the focus to the global agenda on his first trip outside the UK since the beginning of the pandemic.

Amazon, which made Bezos – its founder and former chief executive who is now its executive chairman – a multibillionaire, has faced persistent questions over whether it pays its fair share of tax, as well as the terms and conditions faced by its workforce.

Bezos made a brief journey into space in his rocket New Shepard earlier this year, as part of what has been dubbed the “billionaires’ space race”, with other super-rich men including Tesla’s Elon Musk developing their own rival space vehicles.

“As you know, we’ve been a leading advocate for an international solution to the tax challenges posed by the digitalisation of the economy,” the spokesperson said, adding: “We secured an agreement at the G7 on digital tax, so we’ll very much be looking to raise that.”

With Biden a strong advocate of a more robust approach to taxing corporations, the move may be partly aimed at emphasising Johnson’s reforming credentials before the important White House trip.

Johnson is also expected to press Biden to lift the travel ban that prevents most passengers from the UK visiting the US. The two countries established a working group three months ago to work on opening up travel, but no proposals have yet emerged from it.

Also on the agenda as world leaders meet in New York will be the west’s hasty withdrawal from Afghanistan and how to handle the new Taliban government.

Biden’s arrival in the White House has spurred fresh global attempts at cooperation on tax, which had been blocked by Donald Trump.

G7 leaders signed a historic agreement at June’s summit in Cornwall aimed at tying the tax revenues of the biggest multinational tech firms more closely to the revenues they earn in each country, and setting a 15% minimum corporation tax rate.

More than 130 countries have since signed up to the proposals, which are being overseen by the Organisation for Economic Co-operation and Development (OECD) and aim to end a “race to the bottom” that has undermined corporate tax revenues by pitting countries against each other.

However, the UK has attracted criticism over pushing for the financial sector to be exempt from the new system. Final details of how the new system will work are now being hammered out, with some countries, including low-tax Ireland, still reluctant to sign up.

The chancellor, Rishi Sunak, last year unilaterally imposed a 2% digital services tax on multinational tech firms – a levy that would be expected to lapse if a global deal is reached.

Johnson will also discuss the climate crisis with Bezos, No 10 said. The Amazon founder believes his efforts at space exploration are part of the solution.

“We need to take all heavy industry, all polluting industry and move it into space, and keep Earth as this beautiful gem of a planet that it is,” Bezos told the US broadcaster MSNBC in July.

The prime minister hopes to use the trip to “galvanise” international action, with just weeks to go before the UK hosts the UN’s critical Cop26 summit.

The Cop26 chair, Alok Sharma, will travel with Johnson, as will the new foreign secretary, Liz Truss.

After the G7 summit, Johnson faced criticism for failing to persuade fellow leaders to sign up to a specific end date for the use of coal, or a concrete plan to raise the $100bn (£73bn) in finance they have long promised, to help developing countries to transition away from polluting technologies and manage the impacts of extreme weather.

The OECD published a report on Friday showing that the target would be missed by about $20bn.

Downing Street said Johnson would use meetings on the sidelines of the UN general assembly this week to press for the $100bn promise to be honoured. As a down payment, the government is announcing that £550m of the £11.6bn the UK has set aside for climate finance over the next five years will go to developing countries.

At the end of the week, the UK will publish details of countries’ climate finance commitments to date. Germany and Canada have been leading on a “$100bn delivery plan”, which will be published before the Cop26 Summit.

Johnson said: “In coming together to agree the $100bn pledge, the world’s richest countries made an historic commitment to the world’s poorest – we now owe it to them to deliver on that.

“Richer nations have reaped the benefits of untrammelled pollution for generations, often at the expense of developing countries. As those countries now try to grow their economies in a clean, green and sustainable way, we have a duty to support them in doing so – with our technology, with our expertise and with the money we have promised.”

Johnson is expected to be challenged by EU leaders about the UK’s controversial participation in the Aukus deal – the trilateral agreement with Australia and the US on military cooperation in the Indo-Pacific.

France has been enraged by the deal, which saw the cancellation of a French contract to build nuclear submarines for Australia. Paris took the extraordinary step on Friday of withdrawing its ambassadors from Washington and Canberra for consultations.
#Boris Johnson  #Donald Trump  #Afghanistan  #Joe Biden  #Elon Musk  #Johnson  #Covid  #Tesla