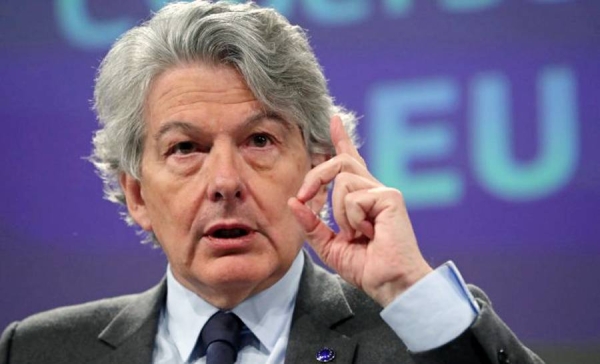 In a bid to help the EU catch up with the increasingly competitive global tech race, Brussels has unveiled a massive subsidy program for semiconductors, the chips that power all sorts of electronic devices and have become a precious commodity in the midst of supply chain disruptions.
Under the name EU Chips Act, the European Commission plans to allocate €11 billion in public funds for the research, design and manufacturing of semiconductors, with the goal of mobilizing a total of €43 billion of public and private investment until 2030.

The €11 billion will come from existing EU instruments, such as the research program Horizon Europe and the recovery fund (Next Generation EU), and the financial plans that member states plan to roll out at the domestic level. Reaching the €43 billion mark will depend on how attractive the EU becomes for private investors.

In 2020, the bloc attracted only 3% of global investment for chip factories, but last year Intel Corp said it was willing to invest over €80 billion in Europe's semiconductor industry over the coming years.

The European Commission's ultimate goal is to expand the EU's global market share from the current 9% all the way to 20% by 2030, an ambitious target that will become harder to achieve as worldwide demand intensifies and governments become more generous in injecting direct support.

"Securing the supply in the most advanced chips has become an economic and geopolitical priority," said Thierry Breton, EU Commissioner for the internal market.

The announcement from Brussels comes mere days after the US House of Representatives passed a legislative package that includes $52 billion (€45.5 billion) in grants and subsidies to boost America's chip production.

The law has to be negotiated with the Senate before being signed by President Joe Biden.

The money will come from 152 companies, with the government offering substantial tax credits for R&D investments and new facilities.

The quest for microchips has become an existential question for advanced economies since the coronavirus pandemic disrupted supply chains and exposed their vulnerabilities to production shortages and delivery delays.

Multinational companies like Toyota, Sony, Ford and Volkswagen have been directly affected by the chips scarcity, which has an international dimension and continues to this day.

The crisis has also shed light on Taiwan's almost monopolistic position: the small island took up over 63% of total foundry revenue in 2020.

Its national colossus, the Taiwan Semiconductor Manufacturing Company (TSMC), enjoyed a 54% share of the global market, serving clients like Apple, Qualcomm and Nvidia. South Korea's Samsung came at a distant second, with over 17% market share, leaving a small fraction for competitors from China, Singapore, the US and the EU.

For Brussels, this dependency is a source of particular regret: during the 1990s, the EU commanded over 40% of the chips market. By the early 2000s, the figure had fallen to 24% and barely reaches 10% today.

The decline has fueled calls for strategic autonomy and more assertive state intervention, a vision embraced by France but opposed by liberal countries like the Netherlands, Sweden and Demark.

Betting on a careful approach to satisfy both sides, the Commission will relax state aid rules under "strict conditions" to allocate "targeted" and "proportionate" public support for "first-of-a-kind facilities" that benefit the whole EU, not just the economy of one or two member states.

"We need to avoid a subsidy race," underlined Margrethe Vestager, EU Commissioner for competition policy, who said the state aid for chips must come "without discrimination" and "only when is needed".

But the regulatory exemption could backfire and complicate competition enforcement for EU officials, who might struggle to rein in the excesses of big countries and compensate the shortcoming of smaller states, said Niclas Poitiers, a research fellow at the Bruegel think tank, who calls the tweak "utterly incredible."

"Germany and France have much bigger pockets to do this kind of policies. These are countries that are already very established on high tech and now they basically get the next high-tech industry to locate to them," Poitiers, whose work specializes in the digital economy, told Euronews.

"Other countries are maybe too small. Some of them have problems with fiscal capacity because of austerity or because they are not that rich. So the risk is that the level-playing field is tilted in favor of the big states."

One of the main objectives of the EU Chips Act is to bridge the gap between semiconductor research, a field where Europe is considered a world leader, and the market, where the continent's modest products are eclipsed by Asian imports.

The European Commission will pour public money and leverage private investment into manufacturing capacities that will help produce EU-made chips in EU-based factories.

Special focus will be put on the next generation of semiconductors, engraved at 3 and 2 nanometers, and even below. As chips get smaller, they get faster and consume less electricity.

This push for domestic production will come with a hefty price tag: building a new semiconductor fabrication plant (so-called "fabs" and "mega-fabs") from the ground up can have a cost between €3 and €20 billion, according to the size and technology used.

These exorbitant expenses act as high barriers to entry that reinforce the leading position of Asian countries and prevent other regions from making inroads into the market.

"We are not going to become a major player with 20% of the market. That seems unrealistic," said Poitiers.

The EU Chips Act will aim to create a more investor-friendly environment where start-ups and SMEs find it easier to access equity finance to expand and scale-up. The European Commission also intends to build international partnerships with "like-minded countries", like the US and Japan.

Beyond these long-term plans, Brussels wants to establish a new coordination mechanism to monitor the state of the semiconductor market, track demand-and-supply trends and anticipate disruptions before they cripple European companies.

All these measures have been compiled in a regulation that needs to be discussed and negotiated between the European Parliament and the European Council, which comprises the leaders of EU countries.

But the European Commission is already urging member states to work together and correct the ongoing chips shortages. "There is no digital or green transition without chips," said Vestager.

Reacting to the announcement, the European Semiconductor Industry Association (ESIA) welcomed the EU Chips Act, the focus on cutting-edge supplies and the adaptation of state aid rules.

"If European decision-makers do not want to be left behind by the rapid development of such programs in other regions, a competitive and agile toolbox as put forward in the European Chips Act should not be delayed any further," ESIA said in a statement.

Digital Europe, a Brussels-based association that represents the tech industry, was also pleased with the act, calling it a "step in the right direction," but asked for "more clarity" around the money that will come from member states and the private sector.

In 2020, over one trillion microchips were produced, ending up in washing machines, cars, smartphones, laptops, cameras, televisions and even the ventilators that treat COVID-19 patients.
#Coronavirus  #Joe Biden  #COVID-19  #Covid