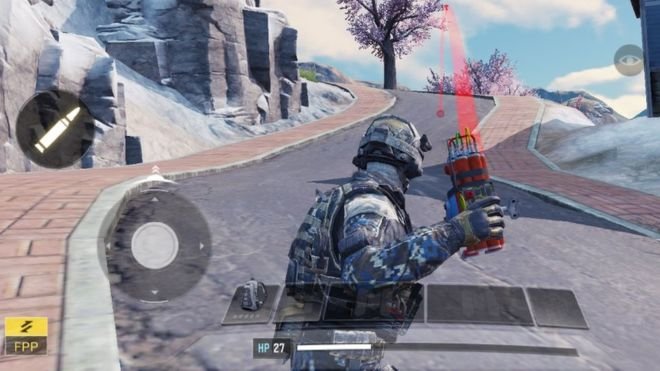 The game's developer has become embroiled in controversy over the political crisis in Hong Kong.

A mobile version of video game Call of Duty has been downloaded more than 100 million times in its first week.

However, a boycott aimed at the game's publisher, Activision Blizzard, has been launched after Blizzard placed a 12-month ban on a Hearthstone gamer who staged an online protest over the political crisis in Hong Kong.

Boycotters included Mark Kern, a developer who has worked for Blizzard.

"It's done," tweeted Mr Kern, with a screenshot suggesting he had just cancelled his subscription to World of Warcraft.

"Unless/until they completely reverse their stance on this issue (which, unfortunately, doesn't seem likely) they will get no more money from me," wrote one Reddit user in a long thread about the boycott.

The latest title in the hugely popular Call of Duty franchise has been well received by gamers, according to download statistics from Sensor Tower.

The company said the game, which was released on 1 October, had enjoyed the biggest mobile launch yet.

A PC and console title, Call of Duty: Modern Warfare, is due to be released on 25 October.

Some social media users encouraged those who had pre-ordered the game to ask for refunds.

Hong Kong protest: City reels from 'one of its most violent days

Activision Blizzard's share price had fallen by 2.3% by the close of trading on Tuesday.

However, the backlash was unlikely to cause serious commercial problems for Activision Blizzard, said James Batchelor, UK Editor at GamesIndustry.biz.

"It's negative PR and that's never great for a company but I can't remember an instance where a consumer-led boycott has led to a significant drop in sales in the video games industry," he told the BBC.

"These games have such a vast audience that I would almost say almost half don't even know what's happening... The vast majority of Call of Duty players are so casual, so mainstream."

Seth Barton, editor of gaming industry magazine MCV, agreed that the boycott was unlikely to have a significant impact.

Activision Blizzard didn't have much choice in the matter, he argued: "by allowing any such protests it would have to either allow all such protests, or become arbiter of what's acceptable and what's not".

Why are some gamers angry with Blizzard?

Ng Wai Chung is the name of the gamer banned for 12 months by Blizzard. He uses the pseudonym Blitzchung.

During a post-match interview on the official Hearthstone Taiwan video stream, he donned a gas mask and shouted: "Liberate Hong Kong, revolution of our age."

Other US technology have become embroiled in the controversy over Hong Kong.

China's state media this week criticised Apple for listing an app in its app store designed to track the movements of police officers in Hong Kong.

The People's Daily newspaper said the app was an endorsement for "rioters".

The tool, HKmap.live, was not named explicitly by the newspaper.

It works by asking users to cite the locations of police and anti-government protesters. This data is then displayed on a map.