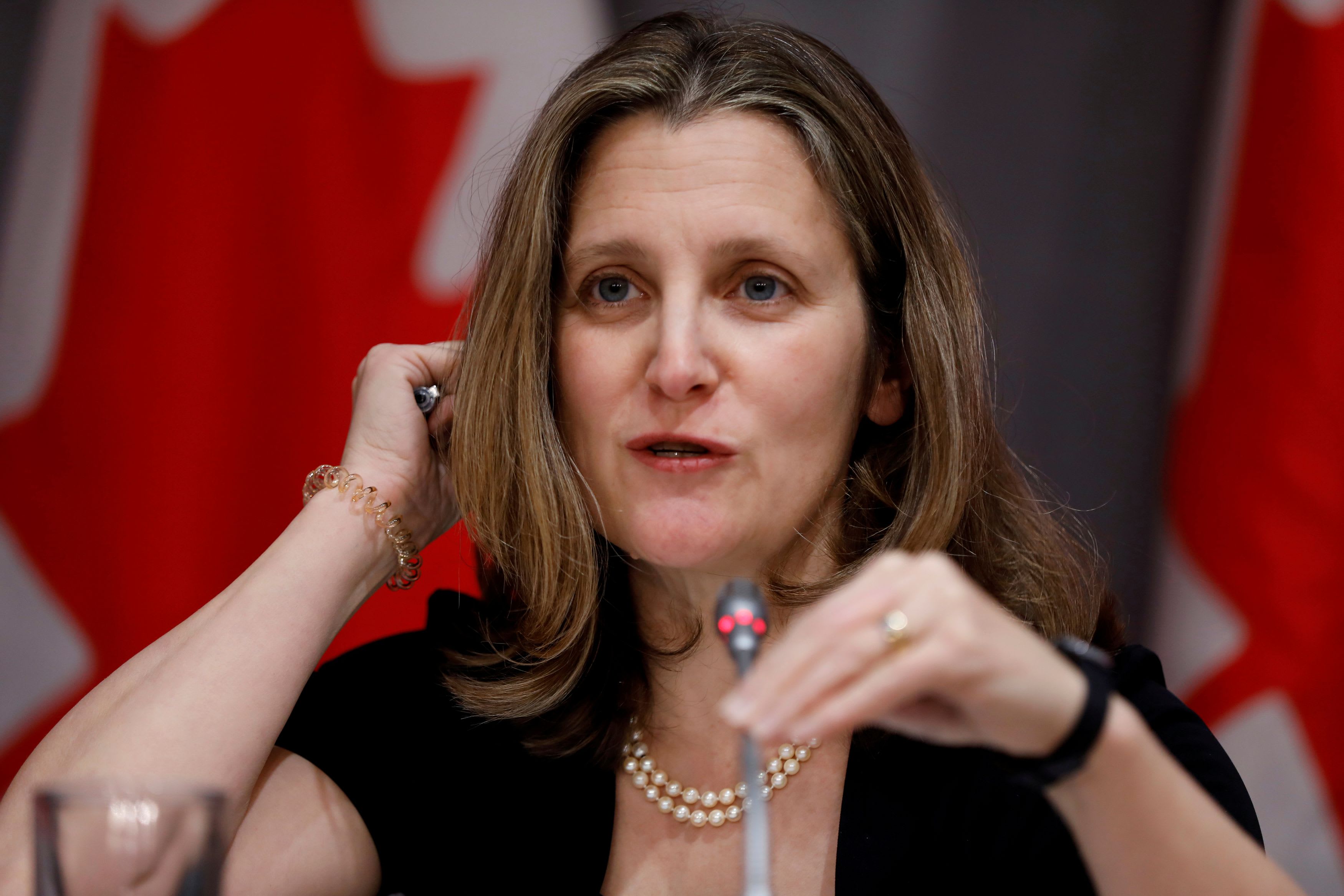 Canada will slap retaliatory tariffs on $2.7 billion worth of U.S. goods, Deputy Prime Minister Chrystia Freeland said. Canada’s move came in response to President Donald Trump’s decision to reimpose 10% aluminum duties on its trade partner. “We will impose dollar-for-dollar countermeasures in a balanced and perfectly reciprocal retaliation,” Freeland said. “We will not escalate and we will not back down.”

Canada said Friday it will slap retaliatory tariffs on $2.7 billion worth of U.S. goods, the latest development in a new trade feud sparked by President Donald Trump’s decision to reimpose aluminum duties on the U.S. ally.

“We will impose dollar-for-dollar countermeasures in a balanced and perfectly reciprocal retaliation,” she said. “We will not escalate and we will not back down.”

Trump, during a speech Thursday at a Whirlpool manufacturing plant in Ohio, announced that he had signed a proclamation reimposing 10% tariffs on aluminum imports from Canada that had been lifted more than a year earlier. The president complained that Canada was putting American workers in the aluminum industry at a disadvantage.

“The aluminum business was being decimated by Canada,” he said.

Trudeau vowed to enact countermeasures against the U.S. just hours after Trump’s announcement.

In response to the American tariffs announced today, Canada will impose countermeasures that will include dollar-for-dollar retaliatory tariffs. We will always stand up for our aluminum workers. We did so in 2018 and we will stand up for them again now. https://t.co/gYH0ziOVM4

Neither the White House nor the Commerce Department immediately responded to CNBC’s requests for comment on Canada’s actions.

The text of Trump’s proclamation says that Commerce Secretary Wilbur Ross informed Trump that Canadian aluminum imports “increased substantially” in the months after the decision to lift the tariffs in mid-2019.

Freeland on Friday lambasted that assertion, arguing that the tariffs will hurt American consumers already suffering from the economic devastation inflicted by the coronavirus pandemic.

“In imposing these tariffs, the United States has taken the absurd decision to harm its own people at a time when its economy is suffering the deepest crisis since the Great Depression,” Freeland said.

“These tariffs are unnecessary, unwarranted and entirely unacceptable,” she added. “They should not be imposed. Let me be clear: Canadian aluminum is in no way a threat to U.S. national security, which remains the ostensible reason for these tariffs, and that is a ludicrous notion.”

Freeland also noted that the new tariffs come just over a month after the United States-Mexico-Canada Agreement – the Trump-backed trade pact that replaced the North American Free Trade Agreement, or NAFTA – went into effect.

“Now is the time to advance North American economic competitiveness, not to hinder it,” she said.