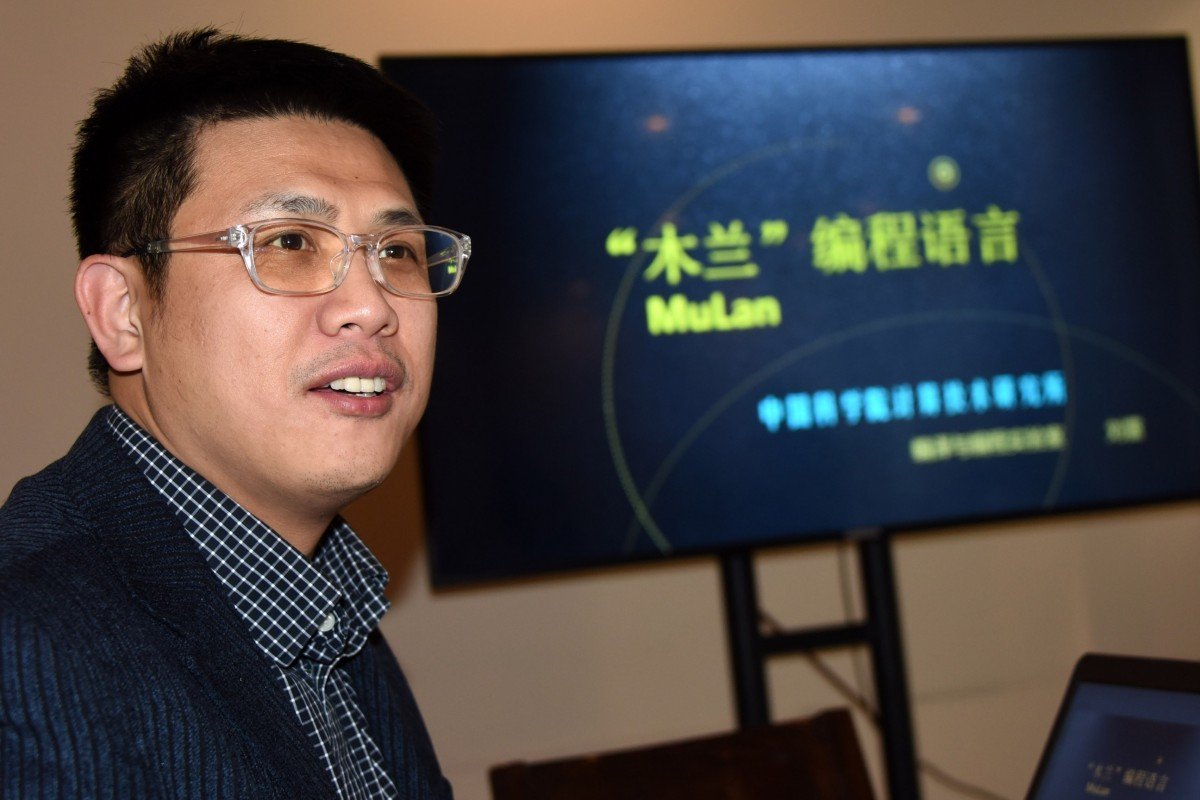 Liu Lei faces an investigation after the Mulan programming language he said was entirely built by his lab was found to be partly based on an existing one. It is the latest such case amid a push to develop home-grown technology
China faces another embarrassment in its drive to build home-grown technology after one of the country’s leading research institutes suspended a senior computer scientist for making false claims.

The latest case involves computer programming language, but it is not the first in the hi-tech industry.

China imports billions of dollars in computer chips and software from the West and has made it a national goal to reduce that dependence by investing huge amounts in developing China-made products.

However, the prospect of such funding has led to a number of claims, such as China-developed microprocessors and internet browsers, that turned out to be fake.

Now, the prestigious Institute of Computing Technology, Chinese Academy of Sciences in Beijing says it has suspended lab scientist Liu Lei and that he faces an investigation.

Liu is the lead developer of a computer programming language known as Mulan, which he had claimed was entirely built in China.

That turned out to be not the case. Other software developers investigated Mulan and revealed it was partly based around an existing open-source programming language known as Python, which has more than 8 million users worldwide.

In an open letter dated January 17, Liu apologised for misleading the public. He said his lab wrote the basic code for Mulan, but also used Python to enable the language to run on more sophisticated machines for complex tasks.

His suspension was announced in a statement posted on the institute’s website on Sunday.

He could not be reached by phone for further comment.

Mulan was named after a heroine in a Chinese legend, but is known more formally as Module Unit Language. It was pitched as a programming language for beginners and had a significant potential market – more than 10 million students under the age of 14 were learning software coding in China in 2018, according to a China News Service report.

Liu had earlier said it was capable of a wide range of tasks, from building a website and controlling a robotic arm to playing chess.

As recently as January 15, he had said in an interview with state media that the language was used in 700 primary and middle schools across the nation. He said it could be expanded to industrial sectors, such as the “internet of things”.

“Mulan was developed entirely by our lab … with core technology truly in the hands of Chinese,” Liu was quoted by Science Times as saying.

The institute where he worked before he was suspended is China’s top research agency, its work ranging from developing cybersecurity to artificial intelligence.

According to two of his colleagues and information on the institute’s website, Liu was a “star scientist” leading the institute’s programme to promote computer skills and knowledge among younger students. The institute did not respond to the Post’s queries for comment.

Yang Xingqiang, a professor of computer science at Shandong University, said the scandal damaged the nation’s drive for innovation.

“The public will have less trust in the research community, funding for projects may be reduced, and researchers who are doing honest work will be collateral damage,” he said in a phone interview with the Post on Tuesday.

China has been here before. In 2018 a web browser known as Redcore was found to have used computer code from Google’s Chrome product. The developer had earlier said it was 100 per cent developed in China.

The Hanxin project led by Chen received more than 100 million yuan (US$14.5 million) in public funds, only for it to be revealed later that it was a chip made by Motorola with the name filed off.

The Hanxin case resulted in a collapse in public confidence in home-grown research.

In 2018, China imported US$310 billion worth of computer chips, nearly two third of the world’s total production.

China’s dependence on Western technology also weakened the position of Beijing negotiators in recent trade disputes with the US and left some of China’s biggest technology companies, such as Huawei and ZTE, facing sanctions.

Yang at Shandong University said the Mulan case was not as bad as the fake chip scandal, because Liu’s team had made some original contributions.

The module unit they used in the language’s design was a novel idea similar to building blocks to shorten the time for young students to get familiar with coding.

“Learning coding from an early age is important. Some of my students started coding in middle school, and they shocked me with the speed they read and write code,” Yang said.

“I don’t think coding education will be affected by this incident,” he added.

Another researcher said China’s focus on building home-grown computer code was linked to getting government funding but was unnecessary.

“There are many open source platforms. They are safe and have a large, thriving ecological system with many contributors around the world,” said the Beijing-based computer scientist, who asked not to be named due to the sensitivity of the issue.
“We should embrace them rather than developing a closed, self-obsessed system,” he said. “A home-grown product is not necessarily better. Mulan is a wake-up call.”