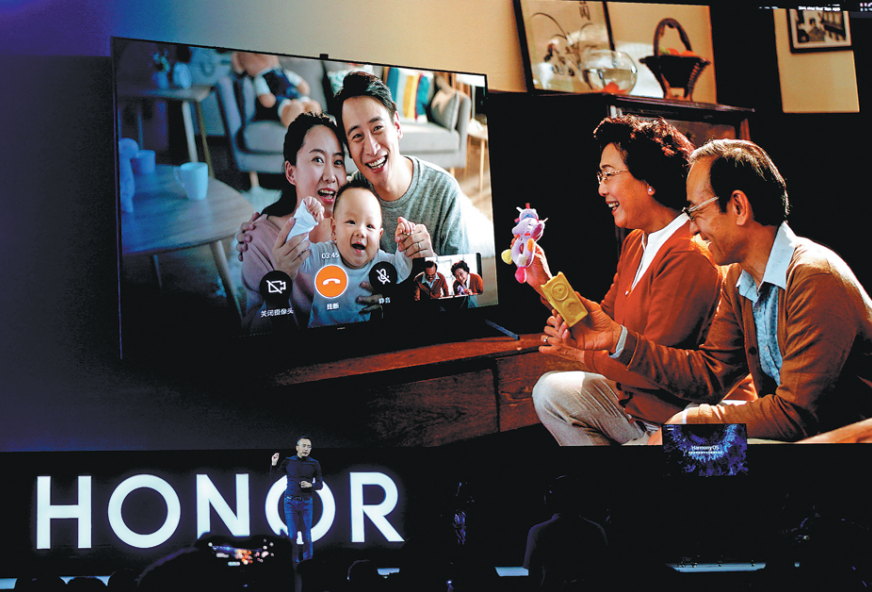 Data from market research firm International Data Corporation forecast the shipment of smart TVs in China will soar to 49.38 million units in 2023, having reached 10.84 million units in the first quarter of this year.

Chinese home appliance manufacturers are pressing ahead with smart TV products which offer interactive scenarios, enhance their interaction with mobile phones, and connect with various smart home devices, to attract customers despite a slowdown in the domestic TV sector.

"The large-sized screen has entered the era of social interaction," Wang said.

He added that Hisense is carrying out research and development of two AIoT chips. AIoT, which means artificial intelligence of things, combines AI technology with the internet of things infrastructure to improve human-machine interaction, enhance data management and analytics.

The 55-inch social TV will support users in having real-time chat with family and friends when they are watching shows and sports matches together.

"Users could sing karaoke in virtual scenarios such as Tokyo, Paris and any other place they like through 3D Avatar karaoke, and the 5G technology makes it possible to invite friends to sing online together," Wang said.

If users want to take a photo, they can just tell the TV, which can help users analyze their appearances and compare them with a pop star through the visual recognition function. Customized services such as dressing-up or monitoring calories will also be provided.

All View Cloud, a market consultancy, said smart TVs are gaining ground in the domestic market, with the penetration rate at 89 percent in 2018. The figure is seen rising to as high as 93 percent.

TCL Corp, another Chinese home appliance manufacturer, unveiled its first revolving large smart screen named XESS in the country as the company aims to drive development through technological innovation and satisfy the different needs of consumers in terms of picture, sound quality and content application.

The XESS features a 55-inch display and could achieve AI-powered auto rotation from a horizontal mode to a vertical mode on shaking mobile phones. There is also the visual experience of watching videos on a 55-inch screen which will be enhanced up to 100 times from that seen on a 5.5-inch cellphone.

Wang added the smart screen will become the core access to a smart home with the function of connecting all scenarios of smart living. It is able to identify users and record their personal habits through facial and voice recognition technology.

Statistics from AVC showed that TV sales reached 22 million units nationwide in the first half of this year, down 2.7 percent compared with the same period last year, and related sales revenue totaled 64 billion yuan ($898 million), a fall of 11.8 percent year-on-year.

"With the arrival of 5G and artificial intelligence, smart screens will not only exist in TVs, but also appear on multiple smart terminals," said Wang Zhiguo, chairman and president of Shenzhen Skyworth-RGB Electronic, a subsidiary of Skyworth Group.

The company focuses on innovation and launched an open big-screen AIoT ecosystem named Swaiot earlier this year to enable users to view, control and manage all their smart home devices from their TVs.

He said the launch of a series of innovative TV products meant people have noticed that TV is not just a tool for viewing, but also an important hub for the smart home. This will have a positive influence on upgrading products, inspire innovation of the sales channel and the supply chain to shore up the whole industry, Dong added.

Smartphone makers are now going into the TV sector. Honor, one of the two signature smartphone brands of Huawei Technologies Co, launched its first smart TV called Honor Vision in August, marking the company's official entry into the sector.

It is the first electronic product that is powered by its in-house operating system HarmonyOS, as Huawei is accelerating efforts to build its own software ecosystem for the era of IoT.

The 55-inch smart-screen will function as a hub for information sharing for families and a center for multi-device interaction, the company said.

Honor President Zhao Ming said the company hopes to leverage its years of innovation in smartphones to reshape the role of TV in people's daily lives. The content from video steaming sites including Tencent Video and MGTV is available on Honor's smart TV.

Redmi, an independent brand of Xiaomi Corp, also launched its first smart TV in August. Xiaomi entered the traditional TV sector in 2013. IDC said the Beijing-based company shipped 2.35 million units of smart TVs in the first quarter of this year, an increase of 79 percent year-on-year, accounting for 21.7 percent in market share.

"The AI-powered TV industry has stepped into a mature period and human-machine interaction has become more important. Along with more tech companies jumping into the industry, the competition will continue and be more intense," said Liu Buchen, an independent researcher in the home appliances sector.