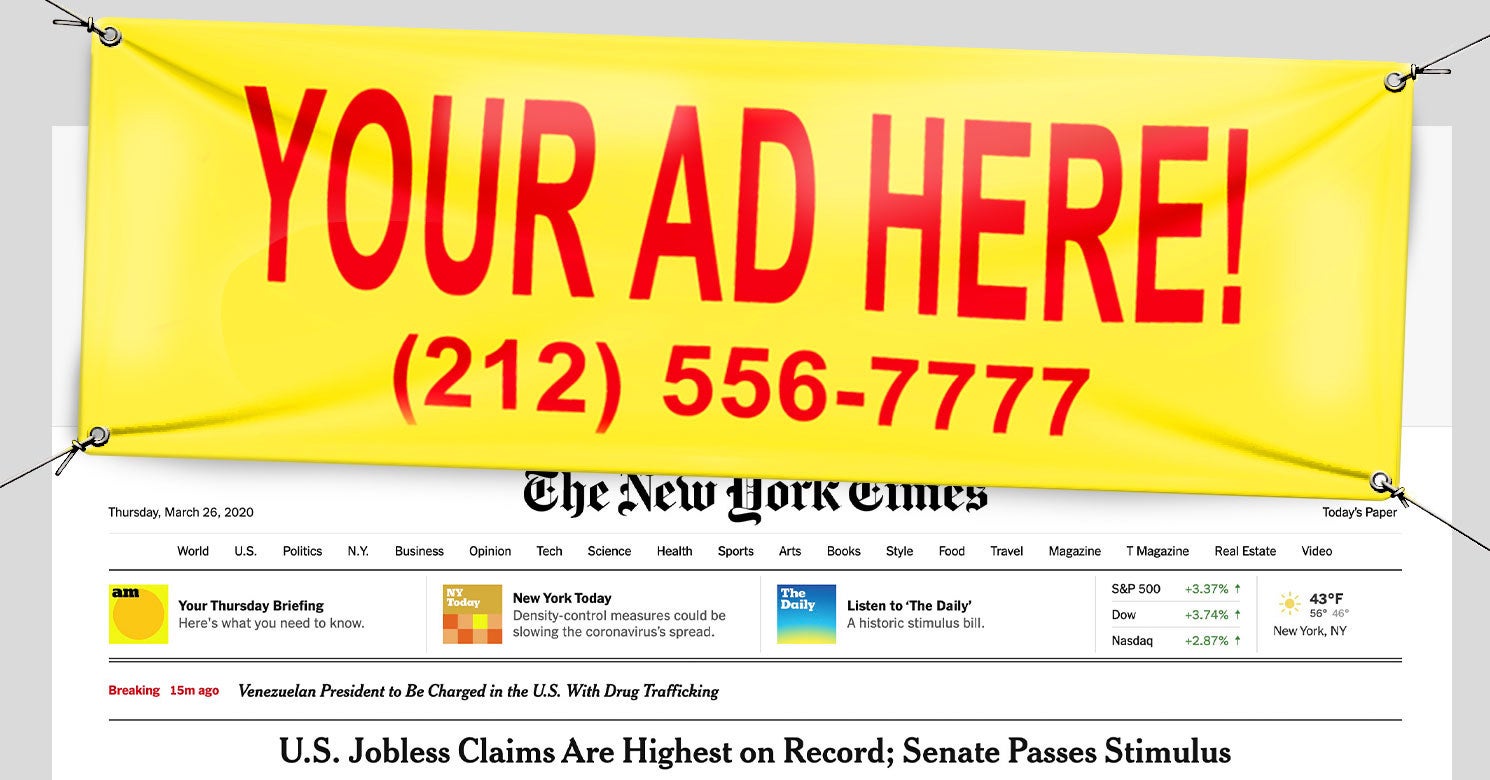 Coronavirus Ad Blocking Is Starving Some News Sites Of Revenue

The coronavirus pandemic has inspired an unprecedented surge in news readership. But it hasn't created a concurrent surge in advertising revenue - starving news organizations of the resources they desperately need in a time of crisis. Advertisers are pulling back what they are spending, and refusing to allow their ads to be placed next to stories that report on the pandemic.

Fears that its ads would appear next to news stories about the coronavirus pandemic led one major global brand to drastically reduce the number of digital ads it placed on the websites of the New York Times, CNN, USA Today, and the Washington Post in March, according to internal data obtained by BuzzFeed News. In total, more than 2 million ads were blocked from appearing on these sites in the first three weeks of the month.

The data paints the first specific picture of how a broad advertiser pullout has damaged the bottom lines at news sites at the same time as readership on those sites has spiked. The data showed high ad block rates for the brand in March on dozens of global news sites, including Der Spiegel, the Guardian, Canada’s Global News, and BuzzFeed News. So far this month, the brand’s ads were blocked more than 35 million times across more than 100 news sites in 14 countries.

A source, who declined to be named for fear of professional repercussions, provided BuzzFeed News with ad placement data for a major product division within a global Fortune 50 company. The company, which cannot be named due to the risk of exposing the source, typically spends roughly $3 million a month advertising its products on news and technology sites.

Many advertisers use lists of sensitive or controversial keywords to avoid placing ads - and spending their ad dollars - adjacent to content they consider unsafe for their brands. But the addition of coronavirus-related terms to these keyword blacklists has choked off revenue as publishers struggle to capitalize on soaring audiences amid catastrophic revenue declines.

“Every dollar you spend on credible news sites helps save lives.”

In March, Integral Ad Science, an ad verification company that works with the brand to improve the quality of its ad placements, automatically blocked 309,726 - roughly 36% - of ads the brand attempted to place on the New York Times’ website. In January, only 3% were blocked, and in February, 6%. Thirty-four percent of the ads the company attempted to place on USA Today's website were blocked in March, as were 45% of those on the Washington Post's website, and 29% on CNN's website. In total, nearly 2.2 million ads for the brand were blocked from appearing.

The New York Times declined to comment. Representatives for the Washington Post, USA Today, and CNN did not respond.

The high March block rates extended beyond those outlets. The Guardian saw more than 2.4 million ads for the brand blocked in March - 50% of the total attempted placements. More than 50% of ads the brand attempted to place with Germany’s Der Spiegel newsweekly were blocked in March, along with 70% of those on Canada’s Global News, 55% on Business Insider, and 56% on BuzzFeed News.

On Wednesday, BuzzFeed CEO Jonah Peretti announced the company would be cutting employee pay in an effort to stave off layoffs. “We are not seeing any issues related to keyword blocking in digital ads, nor are we seeing a dip in programmatic revenue overall,” said Matt Mittenthal, director of communications for BuzzFeed News.

Coronavirus is now the most-blocked keyword in the IAS system, recently surpassing “Trump.” As of the middle of March, the system had over 3,000 advertisers blocking the term "coronavirus," according to a company spokesperson.

“It is possible that this is a temporary measure as [brands] evaluate their stance on appearing adjacent to this type of content,” said an IAS spokesperson.

They said they expect some brands to move away from indiscriminate coronavirus blocking and use technology that can “understand the full meaning of the content on the page and determine whether it fits into their brand suitability guidelines or not.”

Nandini Jammi, the cofounder of the Sleeping Giants digital advocacy group (and who recently wrote about ad blacklisting), said companies and the brand safety vendors they work with need to continue advertising with credible media during an emergency.

“[The] coronavirus is going to dominate our lives for the foreseeable future, which means that newsrooms are going to need to dedicate significant resources to cover the issues,” she told BuzzFeed News. “If brands don’t proactively make sure their ads are funding these stories, they’re going to be seeing a lot of traffic, but that traffic is not going to translate into revenue.”

Jammi said ad tech companies like IAS bear a responsibility for enabling blunt keyword ad blocking. “In my experience, brand marketers aren’t even aware that brand safety companies are making life-and-death decisions for the news industry through their ad budgets.”