Public urged to download NHS contact-tracing app - how it works

The app, which will be tested on the Isle of Wight from this week, is expected to be rolled out nationwide in the next few weeks.

The NHS has revealed details of its contact-tracing app, which will be used to track COVID-19 infections as restrictions on movement ease.

The app, which will be tested on the Isle of Wight from this week, is expected to be rolled out nationwide in the next few weeks.

As revealed by Sky News in March, the app uses Bluetooth to detect nearby phones, showing who the owner of the phone has been near.

Restrictions on movement will not be eased on the Isle of Wight during the test.

But officials believe the app can play an important part in lifting the lockdown, alongside other measures, including testing and manual contact tracing.

"The app is exciting," said Matthew Gould, chief executive of NHSX, the NHS innovation unit behind the app. "But it's not a single solution or magic bullet".

"It's part of this wider strategy."

Although the existence of the app has been known for over a month, this is the first time details of how it will work have been confirmed, although officials stress these are still provisional at this stage.

Isle of Wight residents who download the app will be asked to turn on Bluetooth and allow notifications, and enter the first half of their postcode.

They will then be prompted with a question: "How are you feeling today?"

Anyone who believes they may have caught COVID-19 can run through a short checklist, which asks whether they have a fever or a continuous cough.

If your symptoms indicate you may have coronavirus, you will be given a reference number and told to call in for a test.

You will also be invited to upload a list of your contacts to the NHS system, which will use a risk-scoring algorithm to decide which contacts are potentially dangerous.

This takes into account the duration of the contact and the strength of the signal during the contact in order to assess the risk posed - meaning that it won't force every person who someone has walked by into quarantine.

Variations in the Bluetooth signal can also be used to determine if two phones are detecting each other through a wall, officials said, as the radio waves will be received differently if the wall has nails or foil insulation.

In response to questions about privacy, Mr Gould emphasised that the app was voluntary to download, and promised that NHSX would publish both the source code and the data protection arrangements underlying the app.

However, experts raised concerns about the government's decision to choose a centralised system, which asks users to upload their contacts to a central system, rather than a decentralised model which needs less information.

Apple and Google, who are working together on a contact-tracing system, plan to use a decentralised model, which the UK data watchdog has praised for most easily allowing "best practice compliance" with data protection regulations.

The two tech giants have announced that they would be providing further resources to accelerate what they call the "exposure notification app" ahead of a planned launch of an initial system in mid-May.

Asked why they had chosen to build their own system rather than relying on the operating systems on nearly all the world's smartphones, officials acknowledged that the app was still a work in progress.

However, they said, without a centralised system, they would not be able to rely on self-reporting of symptoms, instead having to wait for official tests, which take time to arrive at a moment when anyone infected is very contagious.

"We're working across a large range of countries, and only the UK is intending to trigger risks based on self-reporting," said Michael Veale, an academic who is involved in a decentralised contact-tracing project which Apple and Google have borrowed from.

"The UK seems to believe they can compensate for the lack of ability to rapidly test people with self-reporting, and mitigate the risks of intentional and unintentional false alarms with unspecified fraud analysis."

"From my perspective, I think such analysis might have a chance of stopping large scale, clumsy attacks, but will not be able to mitigate the broader risks from self-reporting."

Another question that remains to be answered is how people who do not have smartphones, such as young children and elderly people, will be able to use the system.

Mr Gould said NHSX did not want to "accidentally exacerbate the digital divide" and government scientists suggested that manual contact tracing could be used to supplement the technology.

In a briefing call with journalists, deputy chief medical officer Jonathan Van Tam stressed that "it absolutely never will be the case that children are excluded from contact tracing".

Health Secretary Matt Hancock said of trialling the app on the Isle of Wight: "From Thursday, each one of the 80,000 households on the island will get a letter from the chief nurse with comprehensive information about the trial. Islanders will then be able to install the app."

"I know that the people of the Isle of Wight will embrace this with enthusiasm because by embarking on this project and by embracing test, track and trace you will be saving lives."

But he stressed the trial of the app did not mean the end of social distancing measures.

Mr Hancock has promised to hire 18,000 contact tracers in the next few weeks, although public health experts have questioned whether this number is large enough, even with technical help. 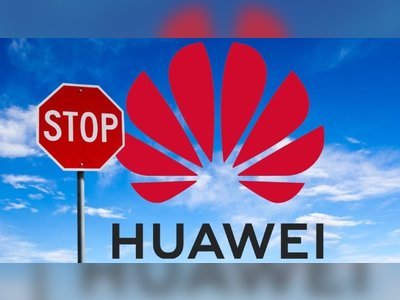 What would happen if the UK ditched the Chinese firm?