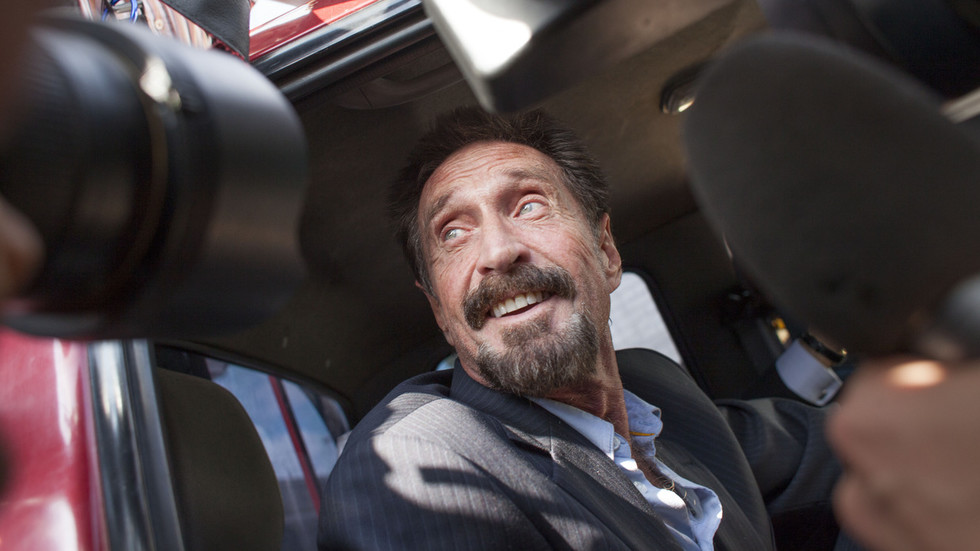 Software magnate and bitcoin evangelist John McAfee’s death has been confirmed a suicide, according to a preliminary autopsy conducted in the Spanish prison he had been authorized to leave just hours before his death.
McAfee was cleared to be extradited to the US on Wednesday after spending eight months imprisoned in Spain. According to the preliminary autopsy, he hanged himself in his cell. He was allegedly found by prison workers in the pretrial detention area.

The eccentric software developer, who had been imprisoned awaiting extradition to the US on charges of four years’ tax evasion, was preparing to appeal the judge’s decision, according to sources including his defense lawyers, who were already preparing an appeal. He reportedly left a suicide note in his pants pocket.

McAfee was imprisoned in Sant Esteve Sesrovires in Barcelona, according to sources familiar with the situation. His widow, Janice, told local press that not only had he not been suicidal, but that he had just that day spoken to her in a way that suggested he was not suicidal. She has demanded a “thorough investigation” into his death and blamed the US government for his death.

She also noted McAfee had a “plan” in place to respond to any extradition attempts, implying he had some sort of “plan B” to escape extradition to the US, and argued his death would be the result of foul play by the US rather than any violence by his own hand. McAfee even had a tattoo inked on his bicep with the word “whackd,” and tweeted in October that if he were to “hang [him]self, a la Epstein, it will be no fault of [his].”

Another tweet doubled down on the suggestion US officials were after him and included a photo of the tattoo.

The software developer behind McAfee AntiVirus had allegedly tried to kill himself once before, in February, while housed in a different part of the Barcelona jail, but a psychiatrist supposedly ruled the attempt was an attention-seeking maneuver and moved him to another part of the facility.

McAfee allegedly had a “dead-man’s switch,” which would release a large number of “sensitive documents,” according to journalist Glenn Greenwald. It’s not clear what that cache contained or when and where it is set to be released. The family requested a second, independent autopsy before the first one had concluded.
#Glenn Greenwald