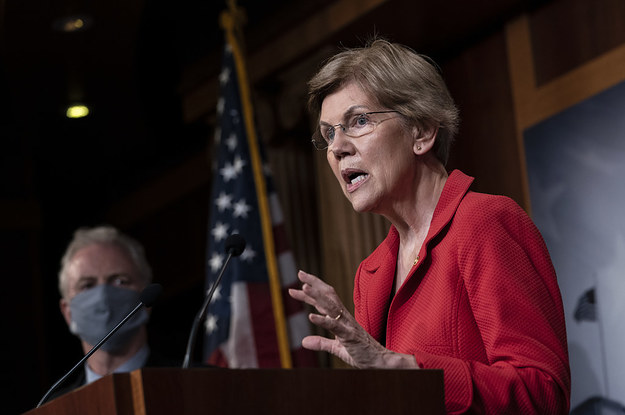 Four lawmakers, including Massachusetts Sen. Elizabeth Warren, said Tuesday that they have "serious concerns" about data-mining company Mobilewalla following a BuzzFeed News story in June that showed the company had used cellphone location data to predict the race, age, gender, and home location of more than 17,000 Black Lives Matter protesters.

In a letter sent Tuesday to Mobilewalla CEO Anindya Datta, Warren, Sen. Ron Wyden, Rep. Mark DeSaulnier, and House Committee on Oversight and Reform Chair Carolyn Maloney demanded more information about the data that the company collects and how it’s used. They also asked which, if any, American and non-American governments have accessed the data.

The lawmakers, who said they were “concerned that data collected by Mobilewalla or other data brokers could be used to enable state-sponsored retaliation against protesters,” demanded Datta respond by Aug. 17.

“In June, your company released a report that disturbingly revealed that location data collected from cell phones was used to identify specific characteristics of American protesters at Black Lives Matter demonstrations around the United States,” the letter read. “We have serious concerns that your company’s data could be used for surveillance of Americans engaging in Constitutionally-protected speech.”

As BuzzFeed News reported, Mobilewalla analyzed location information data it collected from thousands of protesters' cellphones at protests in Minneapolis, New York, Los Angeles, and Atlanta between May 29 and May 31. Mobilewalla used this data to predict if protesters were male or female, young adult (18–34); middle-aged (35–54), or older (55+); and “African-American,” “Caucasian/Others,” “Hispanic,” or “Asian-American.” By using long-term location data, Mobilewalla also attempted to predict whether protesters were from the city of the protest or out of town. These findings were compiled in a report titled “George Floyd Protester Demographics: Insights Across 4 Major US Cities.”

Asked in June why Mobilewalla conducted this research, Datta offered little in the way of explanation. “It’s hard to tell you a specific reason as to why we did this,” he said. “But over time, a bunch of us in the company were watching with curiosity and some degree of alarm as to what’s going on.”

In their letter, the lawmakers said Mobilewalla had surveilled people who were “participating in First Amendment-protected activities." They also suggested that if the company gave cellphone data to a government agency, it may have violated a 2018 Supreme Court ruling which requires police to get a warrant first. There's currently no federal law that regulates how data brokers like Mobilewalla can buy, repackage, and sell people’s information.

In its privacy policy, Mobilewalla says it gets people’s information by purchasing mobile location data, browsing history, and device information from advertisers, data brokers, and internet service providers. Using artificial intelligence, the company then analyzes that information to predict people’s race, age, gender, zip code, and personal interests. It sells this information to advertisers to help them target people with ads.

However, Mobilewalla also has a history of working for political groups. As Motherboard reported, the company has worked with Republican super PACs, including efforts that targeted evangelical voters during the 2016 presidential election. Mobilewalla CEO Datta said in a podcast interview with Nathan Latka that the company monitored the movements of possible evangelicals on Election Day and told campaign workers how many of them were near a voting location.

Thousands of people in hundreds of cities have demonstrated against police brutality following the killings of Breonna Taylor and George Floyd, often demanding that cities defund their police departments and reallocate that money toward social services and education.

Police have sometimes retaliated against protesters violently, using weapons like tear gas, batons, mace, and their own police vehicles. In cities like Portland and New York, plainclothes federal offices have arrested demonstrators by sweeping them away in unmarked vans.

In their letter, the lawmakers asked Datta if Mobilewalla has collected and analyzed data from protesters in Portland, and if the company planned to put out a report or provide that data to law enforcement.