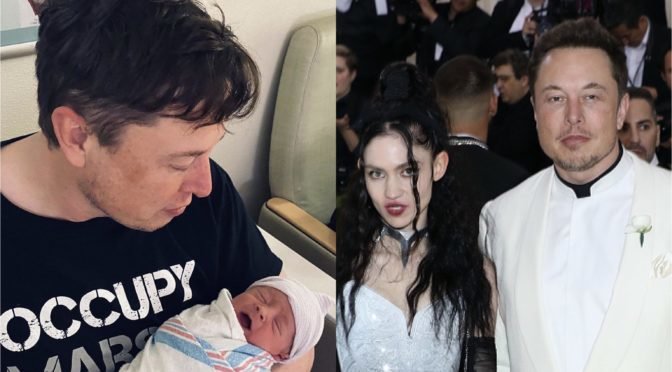 The singer Grimes offers an explanation of the unusual name to her followers on social media.

Elon Musk and singer Grimes have confirmed they have named their baby X Æ A-12.

The Space X CEO announced the birth of their son on Monday. "Mom & baby all good," he said on Twitter.

He posted that the child would be called X Æ A-12 Musk and his girlfriend later offered an explanation to her followers on social media.

The name X Æ A-12 has been trending on Twitter with many asking how the name will be pronounced.

What does the name mean?

When Musk, known to joke on Twitter, announced the name, many people questioned whether he was being serious.

•X, the unknown variable ⚔️
•Æ, my elven spelling of Ai (love &/or Artificial intelligence)
•A-12 = precursor to SR-17 (our favorite aircraft). No weapons, no defenses, just speed. Great in battle, but non-violent 🤍
+
(A=Archangel, my favorite song)
(⚔️🐁 metal rat)

Æ, a ligature of a and e known as ash, appeared in Latin and Old English but has mostly fallen out of use. However, in some languages such as Danish, Norwegian and Icelandic, Æ is classed as a letter.

The singer has used Æ before, naming a song on her latest album 4ÆM.

The A-12 is a Lockheed plane built for the CIA. It was known by designers during its development as Archangel.

She also claims Archangel is her favourite song but does not explain who the song is by.

It remains unclear how the name is pronounced. However, when someone on Twitter asked Musk whether it could be X Ash Archangel, Musk liked the comment, giving the biggest clue as to how it might sound.

It's thought that Grimes may have given birth in California where certain names cannot be registered.

The rules there stipulate that no pictographs, ideograms and diacritical marks for example è, ñ, ē, ç can be used when registering the birth. Names have to consist of the 26 letters of the alphabet.

California isn't the only place in the world with regulations on baby names.

In New Zealand, the name 4Real fell foul of authorities because names cannot start with a number.

A couple went to the high court in Sweden after tax officials deemed their child's name Metallica "inappropriate".

Under Swedish law, both first names and surnames need to win the approval of authorities before they can be used.

However, in 2014, three babies in Scotland were named M, R and T. Other names people have chosen, according to the National Records of Scotland, include Daiquiri and Spartacus.