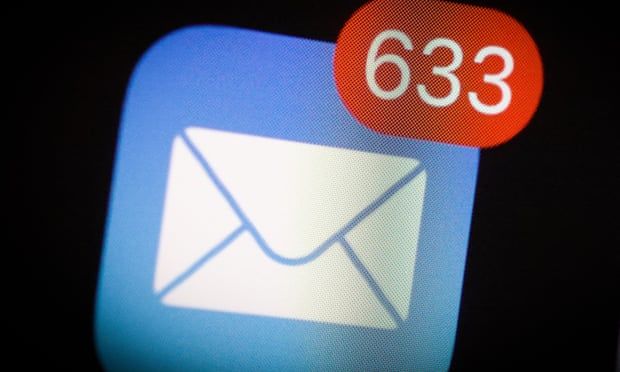 ‘Email is a zombie that keeps rising from the dead’: the endless pursuit of Inbox Zero

As emails loom omnipresent in our connected lives, is the quest for an empty inbox a noble pursuit or an unwinnable war?

Last week, I asked my Twitter followers about their email inboxes.

Author Mohammed Massoud Morsi likened his to a “Kalashnikov on semi-automatic…Nudge, Nudge, Nudge. Nudge. Nudge, Nudge.” Human rights lawyer Diana Sayed replied that hers functions as a to-do list that is emptied on the regular. And when editor Caitlin Chang revealed that her inbox is sitting at over 1,000 and counting (she says she only ever reads the ones at the top, as they’re probably the most important), someone’s response to her was, “I threw up a little in my mouth”.

It’s often the big things in life – politics, money, religion – that are polarising. They elicit heated, passionate responses, and everyone believes their way is the right way.

The subject of email inboxes can do much the same, and given their looming, constant presence in our lives, the right way to manage them is arguably as contentious as all the above – which kind of explains the obsession with Inbox Zero.

If you’re unfamiliar, let me explain: Inbox Zero is a term that was coined in the early noughties by “lifestyle guru” Merlin Mann, who blogged about his rigorous approach to email management – all about keeping the inbox at zero unread emails – on his website 43folders.com. It was grounded in his pursuit for productivity: it wasn’t about the number of emails in an inbox, he said, but how much time our brains spent in that inbox.

Back then, Mann identified five possible actions to take for each message: delete, delegate, respond, defer and do. His approach, which became exceptionally popular, was called “revolutionary” by the New Yorker. And almost two decades later, it’s still a hot topic of conversation.

Dr David Glance, director of the Centre of Software Practice at the University of Western Australia, isn’t surprised. He says there’s a tension between the seemingly endless storage capacities of email systems (designed that way so that the companies behind them could harvest our data) and the “cognitive load” that we encounter when we see ticking numbers in our inbox – something that is “worsened” by the constant access we have to email on smart phones and watches.

“Each buzz sets off hormonal changes that add to the stress levels,” he explains. “An inbox with more than 20 emails becomes unmanageable. Along with all of the other communication channels, this becomes overwhelming very quickly, especially in times of high stress.”

Writer and mother of two Natalia Figueroa Barroso became an Inbox Zero convert after losing an important essay as a university student. The loss of the email compounded her existing anxiety and became a catalyst for a more thorough management of her inbox.

“I’m meticulously organised,” she says. “Zero emails in my inbox and folders to sort receipts, poems, short stories, scripts, ideas, urgent [things] etc. I’m a little compulsive about emails, [and] I married a man who’s the complete opposite. It’s painful to see his email icon on his phone.”

Figueroa Barroso is presently working through 28 emails in her inbox – most relate to a project she’s currently editing – but her husband has in excess of 40,000 in his. He stopped letting her go through it in 2019, when she had a “mini panic attack” over important things lost among “hot deal promotions and bitcoin spam”.

Psychologist Dr Jo Lukins says email is the digital equivalent of clutter, “a constant uncontrollable source of information and tasks [that] can negatively impact our physiology and increase our stress levels”.

She says one of the biggest challenges with our email inboxes is that others dictate the delivery of messages, making us passive users of a critical work tool.

“A full inbox is a constant reminder of what we have not done and can impact our sense of accomplishment,” Lukins says. “Inbox Zero is a powerful strategy we can implement to increase our sense of control about our workflow. Each time we achieve a task, we receive a hit of dopamine that is physically reinforcing, and [we] feel the psychological relief of achievement.”

Like Glance, who says Inbox Zero works because the rules are simple (“don’t have anything in your inbox”), Lukins believes that working towards Inbox Zero – something she has maintained since January 2020 – is a noble pursuit.

So how does one do it?

Lukins advises beginning with a timeframe and working backwards from that, identifying what you will consider current. From there, she suggests either “being brave and deleting everything before that date” or placing in a separate folder marked by that date, only deleting them if you’ve still not retrieved them months later.

“Set aside a time to delete the inbox according to a strategy for actioning emails that suits,” she explains. “The three options I have with an email is: action, delete, task. The ‘action’ emails are those that I will deal with straight away. The ‘delete’ emails are those that I get rid of immediately [while considering if it’s] a source that I can unsubscribe from. The ‘task’ emails are tasks that I am unable to complete in a short period. These emails then get placed on to my ‘what’s next?’ list … on a notebook adjacent to my computer.”

She suggests determining a timeframe for maintaining that goal inbox, asking yourself what success will look like for you. Will you work on your inbox daily? Weekly? At what time?

But psychologist Jocelyn Brewer says the pursuit of Inbox Zero equates success and productivity to a neat and tidy inbox, which is not always viable because our brains weren’t designed to deal with the volume of information that emails expose us to.

“Email is a zombie that keeps rising from the dead,” she says. “Its ‘serve and return’ nature means that you can almost never get ‘on top’ of it, so it can make you feel like you are battling an unwinnable war.”

She advocates instead for something she calls Inbox Manageable, which she says is a combination of working with our psychology and neurology better to improve the way we communicate and the systems that we use to communicate with.

“Few of us ever got formal lessons in how to use email ‘properly’ so we have it bouncing around for all sorts of reasons, often unnecessarily,” she explains.

She advises setting up clearer expectations around its purpose (“not a chat system; not a team brainstorm; not a meeting request system”) without simply moving to other platforms, which often just add other places with which to keep up to date.

Mann now believes that taking Inbox Zero a little too literally is actually detrimental to your time, because we have more inboxes than ever: on multiple social media platforms, email inboxes for work and personal use, and on applications like Slack, Teams and Hangouts. Spending time going through all of them would leave very little time for us to actually live our lives.

Time we might use, perhaps, to argue about the other big things, like politics, religion and money.