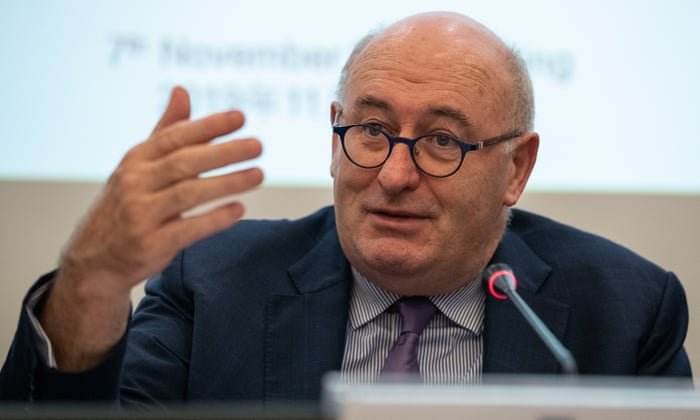 The EU trade commissioner has said the UK can “call Donald Trump’s bluff” on threats to withdraw the US’s cooperation with the UK on intelligence and security over Huawei, the Chinese telecoms giant.

Phil Hogan has also risked the wrath of the US president by declaring that the EU is not, in principle, opposed to giving the Chinese tech group access to 5G plans.

At a press conference in London he said the US did not have exclusivity on safety and security of its citizens, and predicted Trump would come round to the EU view that they had shared interests in that regard.

When asked how he felt about the US threat that the UK would lose access to US intelligence and counter-terrorism security strategy if it did not “fall into line” and bloc the Chinese from the cellular network, Hogan was blunt.

“I think that is a bit of sabre-rattling. I don’t think that will actually happen,” he said.

““We can call [Trump’s] bluff on that one [the US laying down conditions over Huawei],” he said.

Hogan is midway through his first official visit to Washington as the EU’s new trade commissioner.

In a satellite-linked interview at a Global Counsel trade conference with the former EU trade commissioner, Peter Mandelson, he said the EU did not have an objection in principle to Huawei operating in Europe.

He added Europe would take a different approach, arguing that the best way was to “develop criteria in which people can trade fairly. We can’t say to Huawei, “you cannot come into the EU”, that’s not what we want.

“We don’t subscribe to the view that whatever you do you block Huawei.

“If they actually implement the rules of the game … all competition is welcome and must be fair,” said Hogan.

One danger, the US believes, is that its intelligence could be compromised because the UK has access to data under the “five eyes” pact and Huawei could be subject to Chinese state influence, something Huawei has denied.

Hogan said the EU and the US needed to cooperate on regulation on technology, otherwise both sides would lose to China.

He also said he believed the US and the EU could come to some agreement on a tax on digital companies such as Amazon and Google.

“Everybody accepts, including the US, there will be a global tax to deal with technology companies. It’s a question of how we define that and we criteria we end up with,” he said.

On Brexit he warned that it was impossible to agree a comprehensive new relationship with the UK by the December deadline set by Boris Johnson.

“Prime minister Johnson has said he wants everything concluded by the end of the year – it’s just not possible,” he said. “Especially when you have to make a decision about the transition period by the first of July.”

After the interview, Lord Mandelson told reporters that a narrow trade deal was possible by the end of the year but the strings attached to it might be unpalatable.

“I think we can get a bare bones agreement by the end of the year, which would envisage tariff-free and quota-free trade, but it would come at a price and I am not sure that the government would, given the political constraints, be willing to pay it.”