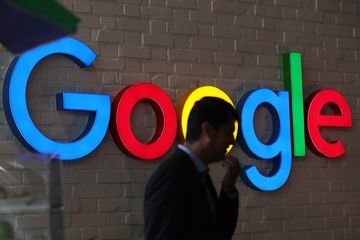 The digital advertising market is expected to hit a milestone in 2020, providing a tailwind for industry-dominating names like Facebook Inc. and Google-parent Alphabet Inc. However, that growth is widely expected to be met with growing scrutiny from regulators on a number of major issues.
According to BofA, global online ad penetration levels are expected to grow to 52% next year from 48% in 2019, thereby surpassing the amount spent on non-digital advertising. The firm expects $144 billion to be spent on digital ads next year in the U.S. alone, a forecast that implies 16% growth from 2019 levels.

Facebook and Alphabet are expected to be the biggest beneficiaries of this growth by far, as the online ad market is “increasingly concentrated” between the two, in the words of Canaccord Genuity. The firm estimated that Alphabet would comprise 20% of next year’s digital ad market, while Facebook constitutes another 14%.

Growing ad revenue has fueled gains in both stocks in 2019. Alphabet is up nearly 30% this year and is trading near record levels, having shrugged off a couple of quarterly reports that raised concerns or failed to excite over the pace of its growth. Facebook has surged more than 50%, twice the performance of the S&P 500, although the social-media company remains below a peak from July 2018.

This “already fraught global regulatory environment” will be “supercharged by a U.S. election cycle that will heap scrutiny on everything from competition, to ad policies, to data privacy,” wrote Tamlin Bason, an analyst at Bloomberg Intelligence.

Facebook in particular is seen as at risk from heightened regulation, even though most analysts concede that major new policies “would take years to craft and implement,” as Bason wrote.

Regulations could force companies to spin off divisions like Facebook’s Instagram, or establish rules that mirror the EU’s General Data Protection Regulation. While Facebook has been spending big to address some of the issues raised by critics, Citi calculated that regulations could collectively shave as much as $60 from the share price. HSBC recently wrote that the “huge regulatory overhang” was potentially equivalent to nearly 40% of Facebook’s valuation.

“We’ve certainly heard some politicians vocally concerned about the idea that these big companies just seem to be getting bigger and garnering more and more market share,” said Savita Subramanian, head of U.S. equity and quantitative strategy at BofA, who spoke at a recent event hosted by the firm. “Breaking up or thinking about how to stop that continued steamroller effect” is an idea “that has essentially bipartisan support in Washington at this point.”

Amazon.com Inc. has also faced attention from regulators about antitrust issues, and it has been repeatedly attacked by President Donald Trump. Earlier this month, the company claimed it lost a cloud-computing contract from the Pentagon because Trump views Amazon founder Jeffrey Bezos as his “political enemy.”

The political element of the big-tech criticisms will likely keep this issue in focus as the U.S. approaches the 2020 election in November. Notably, Democratic presidential candidate Elizabeth Warren has proposed breaking up major tech companies, and if she is successful in the early contests -- the Iowa caucus will be held in early February, followed by the New Hampshire primary shortly thereafter -- that could act as a headwind to share prices.

“It’s still a little bit too early to try and assess what’s going to happen” in terms of regulation, said Liz Ann Sonders, chief investment strategist at Charles Schwab, who noted that the Democratic race was unsettled, and that it was unclear what the makeup of Congress would look like after the vote. However, “someone on the more progressive side might cause some worries, in terms of regulation.”
#Donald Trump  #Facebook