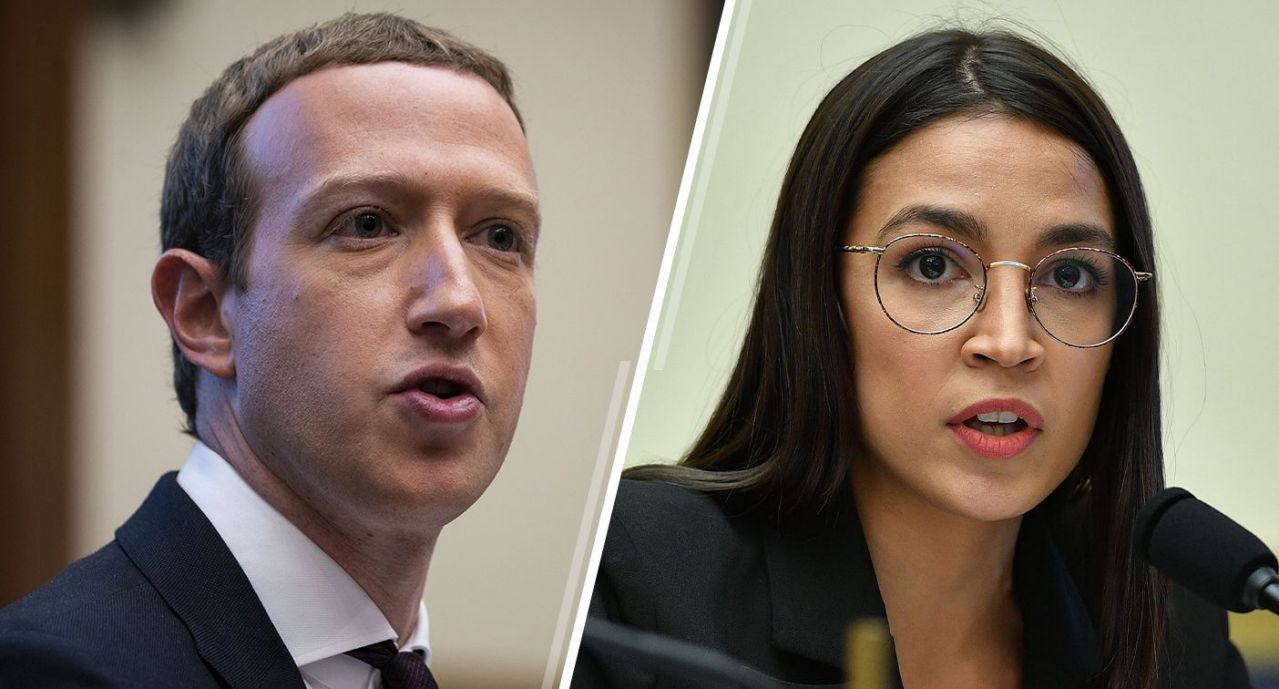 Facebook CEO Mark Zuckerberg struggled to explain the social media company’s new policy on fact-checking political ads under questioning from Rep. Alexandria Ocasio-Cortez during a Wednesday hearing.
The company recently announced that to protect political speech it would no longer fact-check ads from politicians, essentially allowing campaigns to pay Facebook to spread disinformation.

At the hearing of the House Financial Services Committee, Zuckerberg said the company’s policy was to take down posts from anyone, including politicians, calling for violence or attempting to suppress voter turnout or participation in the census, but his response to other questions was less clear.

“Could I run ads targeting Republicans in primaries saying that they voted for the Green New Deal?” asked Ocasio-Cortez. “If you’re not fact-checking political advertisements, I’m just trying to understand the bounds here, what’s fair game.”

“I don’t know the answer to that off the top of my head,” said Zuckerberg. “I think probably.”

“Do you see a potential problem here with a complete lack of fact checking on political advertisements?”

“Well, Congresswoman, I think lying is bad,” said Zuckerberg. “And I think if you were to run an ad that had a lie, that would be bad.” But he said it wasn’t Facebook’s role “to prevent your constituents or people in an election from seeing that you had lied.”

“In a democracy, I believe that people should be able to see for themselves what politicians that they may or may not vote for are saying and judge their character for themselves,” said Zuckerberg.

Zuckerberg was testifying about Facebook’s plan to launch a new digital currency, to be called Libra. Earlier in the hearing under questioning from Rep. Sean Casten, D-Ill., the Facebook CEO was unable to confirm that hate speech from a candidate running for office would be removed from the social network. Casten cited a former member of the American Nazi Party who ran for Congress and won a Republican primary in 2018.

“I’m asking the question whether you can spread hate speech if you’re an elected official or trying to be, but you would not be allowed to if you were not in that capacity,” said Casten.

“Congressman, I think that depends on a bunch of specifics,” said Zuckerberg, “that I’m not familiar with this case and can’t answer to.”

On Oct. 9, Facebook said that it wasn’t removing an ad from the Trump campaign that contained lies about former Vice President Joe Biden and Ukraine. On Sept. 19, Zuckerberg and Trump had a surprise meeting at the White House, which the president referred to as “nice.” Facebook announced a change in policy on Sept. 24: It would not fact-check or remove content by politicians even if the posts violate the company’s rules. Nick Clegg, the company’s vice president of global affairs and communications, wrote, “It is not our role to intervene when politicians speak,” adding that would be done only if a politician’s speech endangers people.

The Trump campaign has spent millions on Facebook, including $5 million over the past three months.

Sen. Elizabeth Warren, a leading critic of Facebook, posted a deliberately false ad on the social network earlier this month to prove the dangers of the current system.

“Breaking news: Mark Zuckerberg and Facebook just endorsed Donald Trump for re-election,” reads the ad. “You’re probably shocked, and you might be thinking, ‘how could this possibly be true?’ Well it’s not. (Sorry.) But what Zuckerberg *has* done is given Trump free rein to lie on his platform - and then to pay Facebook gobs of money to push out their lies to American voters.”

Zuckerberg called a potential Warren administration an existential threat to his company during a July meeting, the audio of which was published by the Verge earlier this month. In March, the company removed policy-oriented paid ads by the Warren campaign that called for breaking up monopoly tech companies, then reversed itself after criticism. The company had pledged that it would work to fight disinformation on its site by sharing huge amounts of data with the public to allow researchers to flag questionable posts. But reconciling that goal with its privacy policy has proved difficult, and the company is behind schedule on the project.
#Mark Zuckerberg  #Donald Trump  #Joe Biden