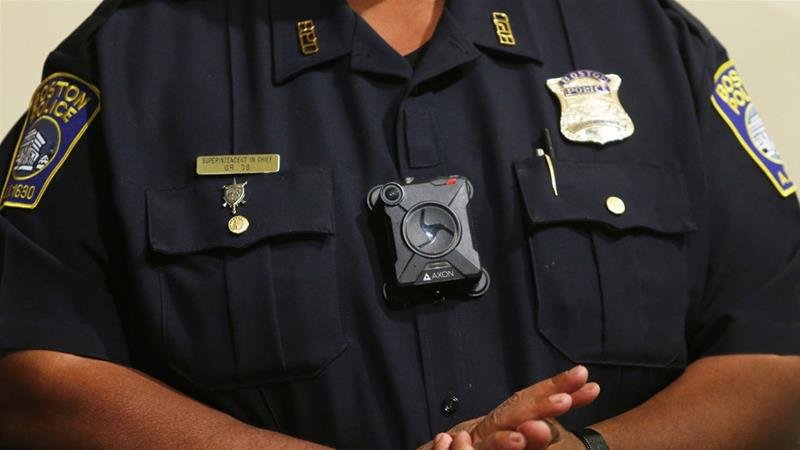 Federal agents are not allowed to wear them and local officers can't wear them during joint operations.

FBI Director Christopher Wray has vowed to "find a way forward" to allow police officers who serve on federal task forces to wear body cameras, affirming that the government will try to reverse a policy that has strained its relationship with some law enforcement agencies.

Speaking to a packed room of police executives at the International Association of Chiefs of Police conference in Chicago on Saturday, Wray cautioned that the policy would have to strike a balance to ensure that the recordings do not compromise any sensitive investigations or reveal the identities of informants.

The announcement comes months after Atlanta's police chief withdrew city police officers from federal task forces over the issue. The Justice Department's current rules do not allow federal agents to wear cameras and prohibit local officers from wearing them during joint operations.

Wray said the FBI needs to maintain strong relationships with police departments and their officers who work with agents at FBI field offices across the country to investigate violent crime, gangs, drug smuggling and terrorism.

"We want to make sure that we find some middle ground that we're all comfortable with," Wray said, warning there were complicated considerations at stake. "The good news is we're talking about it. We're getting it all out on the table, and I'm actually confident we are going to find a way forward here."

In a speech and brief panel discussion that lasted about an hour, Wray steered clear of any mention of the Justice Department's criminal investigation into the origins of the Russia probe that shadowed Donald Trump's presidency for nearly two years.

Attorney General William Barr appointed a US attorney, John Durham, to examine what led the FBI to open a counterintelligence investigation into the Trump campaign and the roles that various countries played in the probe, which morphed into special counsel Robert Mueller's investigation into Russian interference in the 2016 election.

Trump, who is scheduled to speak at the conference Monday, has long claimed there was political bias at the FBI and that the probe was part of a "witch hunt" to discredit him and his presidency.

Wray warned that FBI agents and police officers cannot be distracted by the opinions of "armchair critics" and said instead that the "opinions that truly matter come from people who know us, who work with us, who depend on us."

The FBI director also addressed a new pilot programme aimed at ensuring law enforcement can get fast information about threats that are called in to the FBI's tip line. The bureau has faced criticism in recent years for not acting quickly or strongly enough on tips that were received before mass shootings and other incidents.

More than a month before a gunman killed 17 people at a high school in Parkland, Florida, the FBI received a tip warning that the suspect, Nikolas Cruz, wanted to kill people and was planning a school shooting. The FBI said the information that was provided by the caller should have been assessed as a potential threat to life and passed to agents in Florida, but it never was.

After the Parkland shooting, the FBI made changes to its tip line protocols, bringing on additional employees and requiring that more calls need to be reviewed by a supervisor before they are closed.

The FBI received tips about a social media post threatening violence against Jews just minutes before a gunman killed a worshipper and wounded three others at a Southern California synagogue. The agency also got calls from a man who just minutes later killed seven people in September in West Texas.

Of the 3,000 to 4,000 tips received each day, about 50 are assessed as "threats to life," the highest priority. Under the pilot programme underway in a half-dozen states, the tip line essentially routes the calls to both FBI offices and state and local law enforcement command centers at the same time. That aims to cut down on the amount of time it takes to notify local police of a potential threat.

"The volume and the speed that's needed to deal with it is maybe the greatest challenge we face in law enforcement right now," Wray said. "We have some kinks we have to work through, but I think it is on the right path."