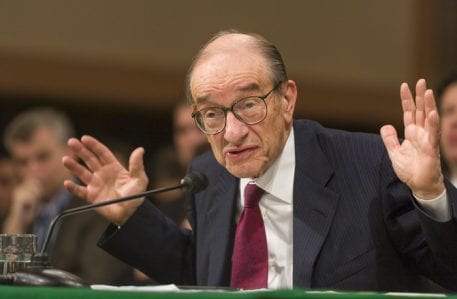 Former U.S. Federal Reserve Chairman Alan Greenspan said Tuesday (Nov. 12) that central banks have no reason to issue digital currency.
“There’s no point for them to do it,” Greenspan said at the Caijing Magazine Annual Conference 2020.

He added that no organization can offer sovereign credit backing that way national currencies do.

“The fundamental sovereign credit of the United States is far in excess of anything Facebook can imagine,” Greenspan said.

Greenspan’s remarks come on the heels of China’s announcement that it would launch a digital currency in early 2020.

Digital currencies hit the world stage in 2017 when bitcoin skyrocketed to nearly $20,000 from $600-$800. Investors are lured by bitcoin’s blockchain technology and its decentralized system.

Greenspan was appointed by Ronald Reagan and led the Federal Reserve during the stock market crash of 1987, the tech boom of the 1990s, and the Mexican, Asian and Russian financial crises (1994, 1997, 1998, respectively), CoinTelegraph reported.

Philadelphia Federal Reserve President Patrick Harker said in early October it is “inevitable” that central banks including the Fed will issue digital currency. He said his view was “in the minority” at the Fed, but that his staff is researching the issue.

“I am looking at the next five years after that. What comes next? I do think it is something around digital currency,” he said.

More recently, Powell expressed concerns over Facebook’s plan to launch its own cryptocurrency, Libra, saying it “raises serious concerns regarding privacy, money laundering, consumer protection, financial stability. These are concerns that should be thoroughly and publicly addressed.”

In the meantime, Harker’s staff is researching the issue, as well as planning a research conference for academics to be held next year.
#Facebook