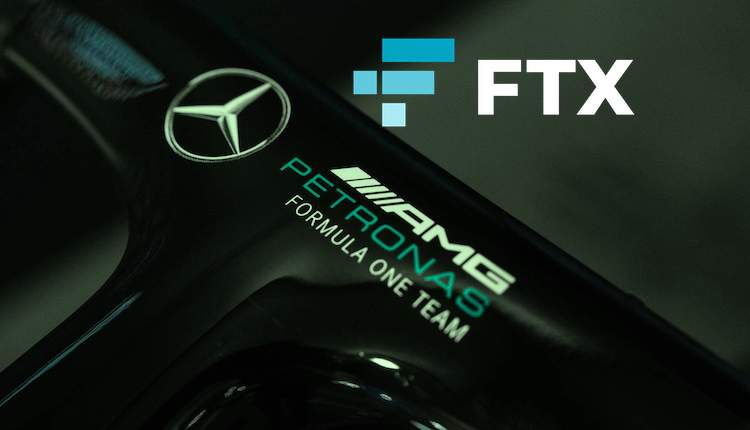 FTX has made several big name partnerships this year. According to the latest announced the crypto firm has partnered with the Mercedes-AMG Petronas Formula One Team. According to FTX, the relationship will span multiple seasons and the FTX logo will be 'featured prominently' by both cars and drivers.

Big sports brands and teams have been entering the blockchain and cryptocurrency space in great numbers this year. Whether it be through advertising crypto platforms or NFTs, popular brands and racing teams want to get in on the blockchain industry.

Last month, Ferruccio Lamborghini Museum launched NFTs, Porsche jumped into the non-fungible token industry, and Motor Team McLaren stepped into the NFT fray. NASCAR drivers have been sporting crypto advertising and have been asked to be paid in digital currencies as well.

The crypto derivatives exchange FTX revealed on Thirsday 23 September, that it is collaborating with the Mercedes-AMG Petronas Formula One Team and the partnership aims to be long-term. FTX logo will be displayed by both Mercedes F1 drivers and cars, other types of FTX branding will be unveiled during the upcoming Russian Grand Prix. The Russian Grand Prix Formula One race featuring Mercedes F1 is slated to happen on Sunday, September 26th.

“FTX is thrilled to partner with the reigning Formula One World Champions and current team point leaders, Mercedes-AMG Petronas, to continue amplifying our position as the leading global cryptocurrency exchange.

Under Toto’s leadership the entire Mercedes-AMG Petronas Formula One team has been focused on excellence and they have leveraged innovation to help them become seven-time Constructors’ Champions. We look forward to watching Lewis Hamilton continue to challenge for his potential eighth Formula One World Drivers Championship title across the remainder of the 2021 season.”

In addition to the logos the Mercedes-AMG Petronas team will sport, FTX logos will be displayed on the team’s fleet of Mercedes-Benz trucks.

“FTX will also have access to Mercedes-AMG Petronas Formula One team members. Including drivers Lewis Hamilton and Valtteri Bottas to further expand the reach of the FTX brand to Formula One’s global fan base through marketing initiatives.”

The company says Mercedes F1 and FTX will also reveal other initiatives in the future which may include an NFT collection, FTX Pay integration, and other concepts.

FTX has been moving fast this year and raised $900 million in a recent Series B financing round. The firm has been knee-deep in the sports industry and recently launched a commercial with Super Bowl star Tom Brady and supermodel Gisele Bundchen.