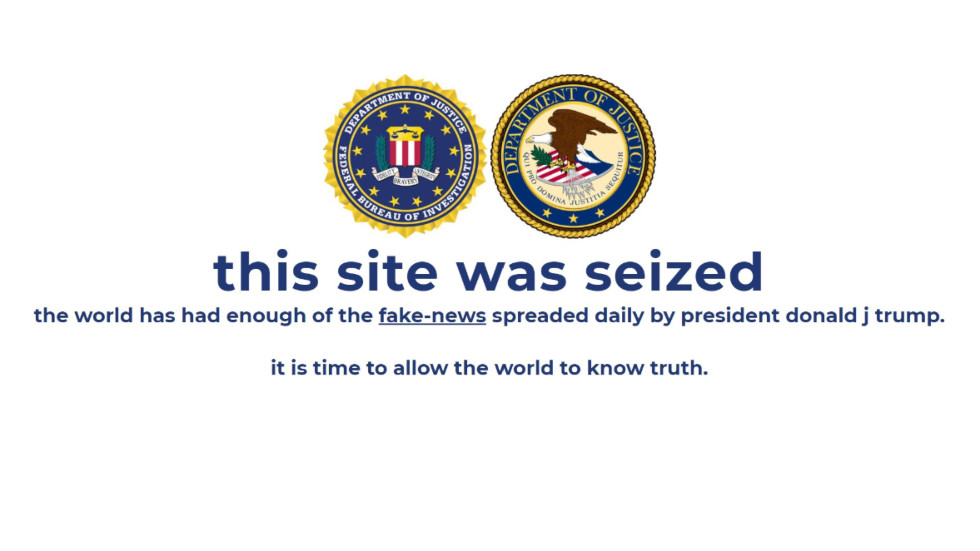 US President Donald Trump’s website has been taken offline after a fake ‘seizure’ notice was posted on multiple pages, claiming the president had ‘spreaded’ fake news and was ‘involved in the origin’ of the Covid-19 pandemic.

While it featured the FBI and Justice Department logos, the announcement was written in broken English and without capitalizations, according to screenshots posted on Tuesday evening.

“[We] have evidence that completely discredits mr trump as president,” the notice said, “proving his criminal involvment [sic] and coorperation [sic] with foreign actors manipulating the 2020 election.”

Trump's Campaign website hacked/defaced by someone who is sick of the "fake news spreaded daily" by the president. pic.twitter.com/035neUv7kc

It also claimed that “most internal and secret conversations strictly classified information is exposed proving that the trump-gov [sic] is involved in the origin of the corona virus.”

This has been a key message of Chinese disinformation all year

The notice appeared on multiple pages of the donaldjtrump.com site. Whoever was behind it posted two links to accounts of the cryptocurrency Monero, offering the public to pay them to share the alleged secret information, or not.

Lmao that's such an easy scam to raise money.

It was not up for long, however, as the site was quickly taken offline. As of 23:30 GMT, it was operational again, with no trace of the scam.

Soon after the website was restored, Trump campaign communications director Tim Murtaugh acknowledged the hack, saying the site was “defaced,” but that “there was no exposure to sensitive data,” as none is actually stored on the campaign page. He added that the Trump team is now working with law enforcement to “investigate the source of the attack.”

NEW: Trump campaign says they their website was “defaced” and they are working with authorities to “investigate the source of the attack.”@TimMurtaugh says no sensitive information was compromised because “none of it is actually stored on the site.” pic.twitter.com/fi3jrw2FRC

The attack on the campaign website comes amid a series of alternative media stories accusing Trump’s rival Joe Biden of being involved in shady business arrangements in China spearheaded by his son Hunter.

Mainstream media outlets have denounced the story as “Russian disinformation,” even though the US director of national intelligence said there was no evidence that was the case.

Back in 2016, Democrats accused Russia of hacking the DNC emails as well as the private email account of Hillary Clinton’s campaign chairman John Podesta, which were released by WikiLeaks ahead of the election. The accusations set off years of witch-hunting for “foreign meddling” in US politics.

Back in August, someone had redirected the domain Antifa.com to point to Biden’s campaign site. The prank quickly attracted conspiracy theories about – what else – Russian involvement.