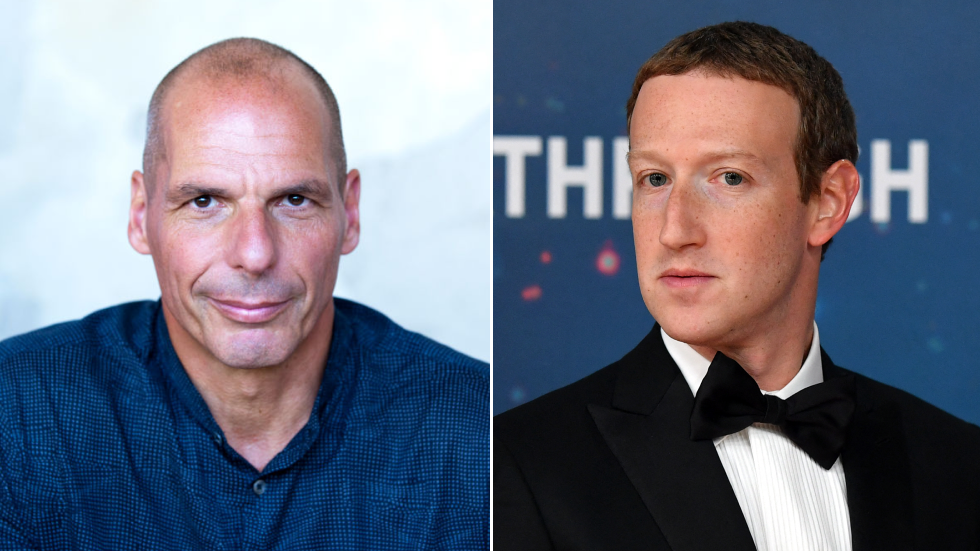 Former Greek Finance Minister Yanis Varoufakis waded into the hubbub around Facebook changing its corporate name to ‘Meta’, accusing Mark Zuckerberg of “borrowing” the new title from the moniker of an anti-capitalist think tank.

In a series of tweets on Friday, Varoufakis told the Facebook founder to keep his “hands off our mέta” – referring to the Athens-based ‘Centre for Postcapitalist Civilisation’. The non-profit research center lists the Greek MP on an advisory board that includes scholar Noam Chomsky, musician Brian Eno, filmmaker Ken Loach, economist James K. Galbraith, and philosopher Slavoj Žižek.

Established in 2020, the think tank’s mission statement says it works through “art and research, argument, and poetry” to “break with a dystopic present” by aiding “radical progressive movements.”

“You, and your minions, wouldn’t recognize civilization even if it hit you with a bargepole,” tweeted Varoufakis, who added separately that the big tech firm helps create the current dystopian reality.

Varoufakis also accused Zuckerberg of having previously “borrowed” the name of his Democracy in Europe Movement 2025 (DiEM) movement to rebrand his cryptocurrency. Facebook’s under-development cryptocurrency was originally named ‘libra’ but renamed as ‘diem’ last year.

Zuckerberg announced his ambitious plans for the creation of a virtual “metaverse” last week amid a spate of negative press coverage linked to whistleblower Frances Haugen’s allegation that the Silicon Valley giant prioritizes “profit over people.” He renamed the parent company of Facebook, Instagram and WhatsApp as ‘Meta’ effective immediately.

The rebranding elicited both support and ridicule on social media, including from several influential figures and even popular fast food chain Wendy’s. It also spawned a variety of memes – at least one of which played on the new title to suggest another less obscure Greek connection for the name: the famous ‘Feta’ cheese.

While some social media users dismissed Varoufakis’ claims as “narcissistic” and “delusions of grandeur,” many commenters appeared to agree that the similarities between the two instances of renaming looked “almost like it was on purpose.”

In response to Varoufakis’ tweets, another Greek organization Metabook – which described itself as the “largest marketplace of used books” in the country – claimed that its name was one of those that Facebook had “shortlisted.” It added that while the tech giant “finally cut the ‘book’ part,” it “kept our logo.” Both logos feature a variation of the infinity loop symbol.

Most, however, said that claiming “ownership” or having some sort of “trademark” over a word that is part of the common parlance today was “stupid” — while others were sure that the renaming was simply part of a plan to “divert” some of the bad press away from the company.