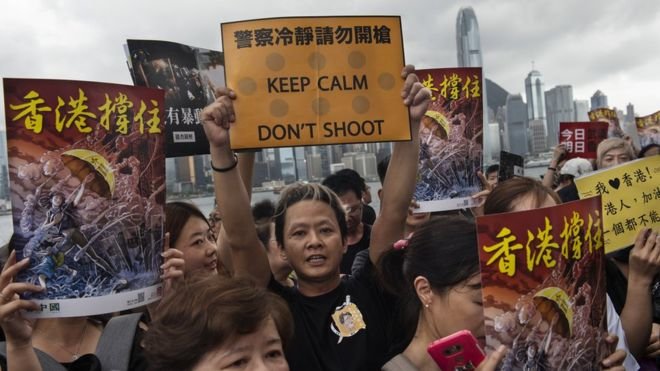 Anti-Government protesters in Hong Kong have been turning to a new app to communicate - one that does not use the internet and is therefore harder for the Chinese authorities to trace.

Bridgefy is based on Bluetooth and allows protesters to communicate with each other without internet connection.

Downloads are up almost 4,000% in the past two months, according to measurement firm Apptopia.

Texts, email and messaging app WeChat are all monitored by the Chinese state.

Bridgefy uses a mesh network, which links together users' devices allowing people to chat with others even if they are in a different part of the city, by hopping on other users' phones until the message reaches the intended person.

The app was designed by a start-up based in San Francisco and has previously been used in places where wi-fi or traditional networks struggle to work, such as large music or sporting events.

Speaking to Forbes, co-founder Jorge Rios said of the spike in use in Hong Kong: "People are using it to organise themselves and to stay safe, without having to depend on an internet connection."

The BBC understands that protesters are turning to Bridgefy in case the internet is cut off, or the so-called Great Firewall of China, which censors some parts of the web on the mainland, is instigated in Hong Kong.

A similar app, FireChat, has already been used in previous protests in Hong Kong and also in Taiwan, Iran and Iraq.