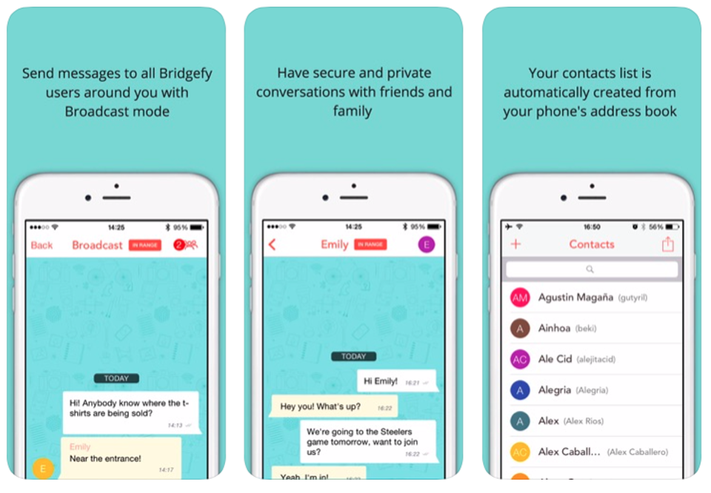 How protesters communicate when the government censors the internet? With a peer-to-peer mesh broadcasting network that doesn’t use the internet. That’s exactly what Hong Kong pro-democracy protesters are doing now, thanks to San Fransisco startup Bridgefy’s Bluetooth-based messaging app. The protesters can communicate with each other - and the public - using no persistent managed network.

And it’s led to swift growth for Bridgefy: downloads are up almost 4,000% over the past 60 days, according to Apptopia estimates (Apptopia is an app metrics company).

The app can connect people via standard Bluetooth across an entire city, thanks to a mesh network. Chatting is speediest with people who are close, of course, within a hundred meters (330 feet), but you can also chat with people who are farther away. Your messages will simply “hop” via other Bridgefy users’ phones until they find your intended target.

While you can chat privately with contacts, you can also broadcast to anyone within range, even if they are not a contact.

That’s clearly an ideal scenario for protesters who are trying to reach people but cannot use traditional SMS texting, email, or the undisputed uber-app of China: WeChat. All of them are monitored by the state.

Bridgefy is a messaging app that works with or without Internet. It’s based on Bluetooth instead, and we built it because we know that the lack of communication can be vital in many places and situations. Most people download it before going to a large music of sporting event, but Bridgefy currently having huge spikes in downloads from Hong Kong due to the protests.

1) Whenever there’s a hurricane or earthquake in the world, we see spikes in app downloads.

2) Because Internet access is starting to be limited by the authorities. Because it’s a safe way for people to communicate with there being very little risk of messages being read by unwanted eyes.

We’ve seen more than 60,000 app installations in just the past seven days, most of them from Hong Kong. People are using it to organize themselves and to stay safe, without having to depend on an Internet connection.