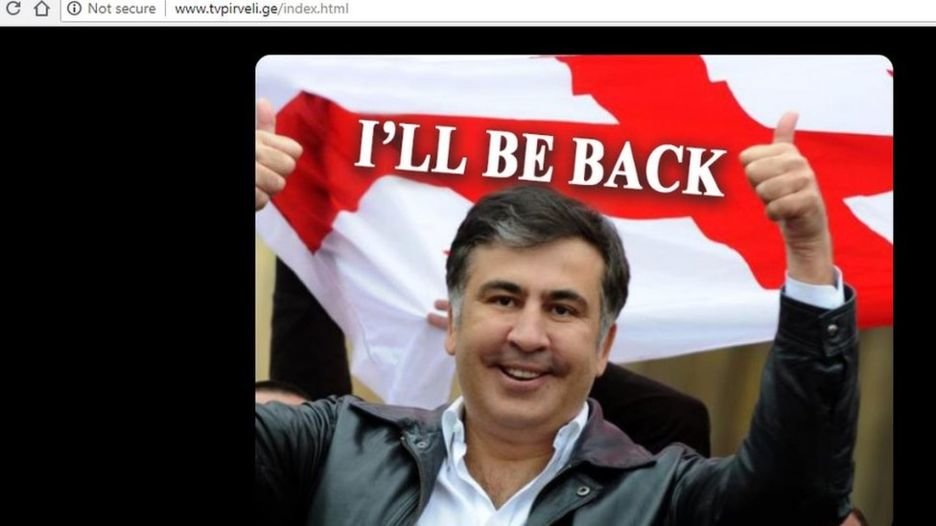 A huge cyber-attack has knocked out thousands of websites - as well as the national TV station - in the country of Georgia.

In many cases, website home pages were replaced with an image of former President Mikheil Saakashvili, and the caption "I'll be back".

The origin of the attack is not yet known.

BBC Caucasus correspondent Rayhan Demytrie said people on social media were speculating that Russia might be behind it.

She added that she had been told by cyber-security experts that Georgian government websites were "poorly protected and vulnerable to attack".

More than 2,000 websites, including non-government organisations and private companies, were targeted.

Irakli Chikhladze, head of news at TV station Imedi, posted on Facebook that there was no signal, and the station was unable to broadcast.

Both Imedi and another network, Maestro, were affected, he said.

"The scale of this attack is something we haven't seen before," said Prof Alan Woodward, cyber-security expert at Surrey University.

"With the scale and the nature of the targets, it's difficult not to conclude that this was a state-sponsored attack."

Prof Woodward added that while the disruption caused had been "significant", critical national infrastructure did not appear to have been affected.

Who is the former president of Georgia?


Mikheil Saakashvili was in power in Georgia between 2004 and 2013, serving two terms as president.

He gave up his Georgian citizenship in 2015, when he become governor of Ukraine's Odessa region.

He was deported from Ukraine in 2018 after falling out with his predecessor - but his Ukrainian citizenship was restored in May 2019.

Mr Saakashvili is wanted in Georgia on criminal charges, which he claims are politically motivated.