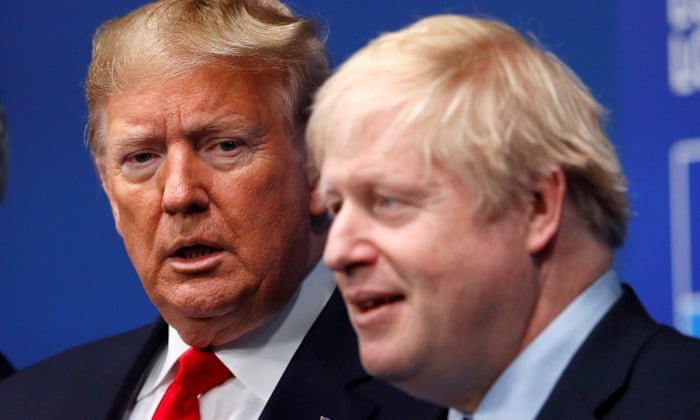 A security issue should see Boris Johnson back his security advisers, even if it makes Trump furious

Should Chinese firm Huawei’s kit be banned from the UK’s 5G network? As with HS2, Boris Johnson is guaranteed to end up infuriating one side of the argument. The stakes, though, are substantially higher here, whatever the prime minister says about his hopes for compromise. One route could lead to trade conflict with the US. The other could pile costs on to the UK’s 5G network, with a knock-on impact on UK competitiveness.

Those extra technology costs are almost the only element in this quarrel that is not disputed. Even non-techie outsiders can understand how the expense would arise. The 5G technology is intended to build on the existing 4G infrastructure, where Huawei’s gadgetry is used in UK masts and antennas. An outright ban would amount to a time-consuming “rip and repair” job, say the companies. One way or another, consumers and businesses would pay the bill.

The same issue does not arise in the US because its networks are largely built with equipment from the only other big firms left in the market – Nokia and Ericsson. Blocking Huawei would narrow choice further, at least until Samsung or somebody else fills the gap in the market.

None of the other factors is straightforward. Huawei swears it is not an arm of the Chinese state, but few believe it would refuse instructions from Beijing to spy. The US says the cybersecurity risks are severe, but the UK’s security services say they can be managed if Huawei’s kit is kept to the periphery. Australia has opted for an outright ban, but some argue the UK’s network is safer by design.

In normal circumstances, you would bet on Johnson to take the easy option but it’s hard to say which that is here. In the end, though, the key consideration should be this: this is a security issue and a UK prime minister should back his security advisers.

That would mean allowing Huawei a limited role in 5G in the UK and policing its every move until replacement suppliers can be found that offer 100% peace of mind. Washington and Donald Trump would be furious – but the trade deal can wait.


James Benamor, the founder of Amigo Holdings, wants to find a friend. Specifically, he’d like someone to buy his unlovely company, which makes its money by lending to sub-prime borrowers, as the euphemism has it, provided they can find a friend or relation to guarantee both interest and principal.

That guarantor innovation – the amigo bit – is the clever part from the point of view of the lender since, in theory, there is a wealthier individual to chase should the loan go sour. It happens a lot, as you’d expect given that Amigo charges interest at an annual rate of 49.9%. At the last count, 31% of Amigo’s loan book was impaired.

As you would also expect, regulators have taken a sceptical look at this business model. Officials are not specifically interested in Amigo’s potential to wreck friendships and ruin family relationships, but the point is related. Do guarantors truly understand they could be on the hook? Do all parties understand the risks properly? Why are there so many complaints?

Amigo, where Benamor’s private firm owns a 61% stake, insists its lending policies are “robust” but it does not like the way regulatory winds are blowing. Thus Benamor, who shoved himself back on the board via a coup last year, wants to find a buyer or other “strategic” solution. There is, says Amigo ominously, “a continual evolution in the approach of the Financial Ombudsman Service” and pressure on the business.


Sign up to the daily Business Today email or follow Guardian Business on Twitter at @BusinessDesk
Outside shareholders know that already. Amigo somehow got itself floated at a £1.3bn valuation in 2018, but it has been downhill since. The shares were listed at 275p, which enabled Benamor’s Richmond Group to bank the thick end of £300m from selling a minority stake, but they stand now at 48.6p. The flotation has been disastrous.

Those non-Benamor shareholders should have known better, of course. Being a minority investor can be uncomfortable even in good times. Now outsiders are exposed to the risk that Benamor could add insult to their financial injury by trying to take Amigo private again with his float proceeds.

The other people who should have steered a wide course are the advisers. Alongside RBC Capital Markets and Macquarie Capital, you will find the grand blue-chip name of JP Morgan Cazenove on the float documents. That’s the same JP Morgan where boss Jamie Dimon preaches a gospel of social responsibility these days. What was it thinking?