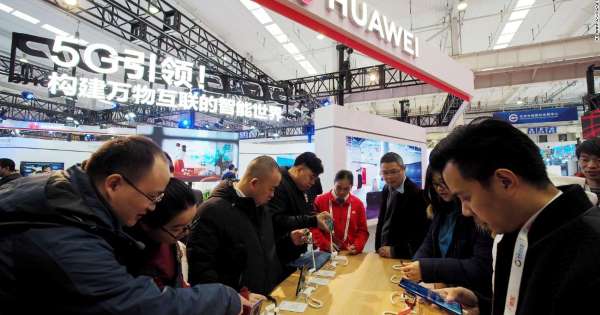 Embattled Chinese tech company Huawei has filed a lawsuit over new restrictions from the US Federal Communications Commission that further limits what little business it has left in the United States.
Huawei, the world's largest telecommunications equipment maker and a leading smartphone brand, said Thursday that it has filed a lawsuit in New Orleans challenging a recent FCC decision that prohibits American carriers from using federal subsidies to purchase Huawei equipment.

Song Liuping, Huawei's chief legal officer, said at a press conference Thursday that FCC chairman Ajit Pai is targeting Huawei because it "is a Chinese company, that's his only excuse."

"He has tried to spread fear about Huawei. He uses words like 'back door' to scare people, but offers no proof," Song added.

Huawei's lawsuit argues that the FCC order is unlawful because it gives no evidence of the national security threat that the company poses, which is in violation of the US Constitution and other laws. The company has made similar arguments in other litigation against the US government.

The latest lawsuit is part of Huawei's broader strategy of fighting Washington's pressure campaign on the Chinese company through US courts and public opinion. In March, Huawei sued the US government over a law that banned federal agencies from buying its products. Huawei executives have published op-eds in the Wall Street Journal and USA Today, insisting that it is a private company and "not a tool of the Chinese government."

The company has also dramatically upped its spending on Washington lobbyists to nearly $1.9 million in the first nine months of this year, compared to $165,000 in 2018, according to Open Secrets, a nonprofit, nonpartisan research group based in Washington.

In an interview with CNN Business last week, Huawei CEO Ren Zhengfei said the FCC decision goes against "the bedrock principle [of the US political system] because the US government should serve the best interests of Americans."

But Washington says Huawei poses a national security threat and has taken several steps to curb its business, including barring US companies from supplying the Chinese firm with key tech and software. The Trump administration has also argued that installing Huawei's equipment in US networks could allow Chinese spies to eavesdrop on sensitive US communications. Huawei denies the allegations, and says none of its products pose a national security risk.

That has not stopped President Donald Trump from keeping up the pressure campaign. At a NATO summit outside London, Trump said on Wednesday that using Chinese equipment in 5G networks poses "a security risk," and that the US would not be using Huawei. He added that he had raised the issue with several countries.

UK Prime Minister Boris Johnson, also speaking at the NATO summit on Wednesday, toughened his stance against the Chinese company.

Johnson told reporters that using Huawei equipment could pose a national security risk and could "prejudice" the UK's ability to cooperate with other members of the Five Eyes intelligence alliance (the US, UK, Australia, New Zealand and Canada).

Huawei's US business is limited to sales of telecommunications equipment to a few small, rural carriers. The FCC estimates that the company only accounts for a small percentage of equipment in US networks, "likely in the low single digits," according to a recent FCC report.

A Huawei executive who previously headed the company's US business said on Thursday that the company's US revenue "is minimal" when compared with its global revenue, which hit $105 billion last year.

But Huawei is pushing back on the latest US restriction in part to defend its global brand. The company has signed more than 50 5G contracts with carriers around the world.

Being branded a national security threat by the US "will bring about reputation losses and that will have a further impact on our business," Alan Fan, vice president for IP strategy and international legal policy with Huawei, told reporters Thursday.
#Donald Trump  #Boris Johnson