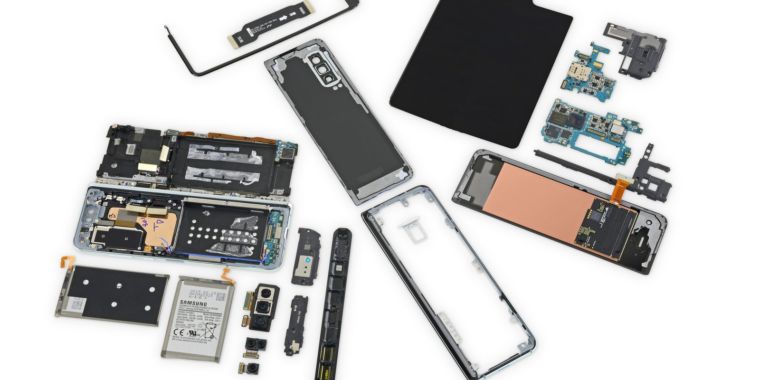 The Galaxy Fold gained 13 grams between April and October. iFixit finds out how.
The Samsung Galaxy Fold finally launched in the US on Friday after a five-month delay, and with retail units out in the wild, the phone has reappeared on iFixit's teardown bench.

iFixit previously tore down the Galaxy Fold back in April, before the phone was even technically released, having somehow acquired a recalled unit. iFixit really explored the device, providing details about why the phones were dying early and suggesting solutions for Samsung. Samsung did not take kindly to its design failures being laid bare before the Internet, and it went after iFixit's supplier, forcing the site to remove the teardown. The original teardown from April is still up on Archive.org, though, and can now be freely compared to this new Galaxy Fold teardown after five months of reworking back at Samsung HQ.

First, the Galaxy Fold has gained some weight. During the original launch in April, the device was specced at 263g, but now the device is 276g. A good bet for where that extra 13 grams of weight came from was in Samsung's description of the Fold redesign, which included "additional metal layers" under the display. iFixit writes that this is actually a flexible, "chainmail armor" that now lives immediately under the display.
Originally, there were only rigid metal plates providing support for the Fold's soft, flexible OLED panel from behind, and because a metal plate doesn't readily bend, the plates stopped before the fold in the phone screen, leaving it unprotected. In pre-release units, reviewers reported debris working its way under this unprotected section of the screen from the back and damaging the display. This new chainmail layer that lives in between the rigid plates and the display now covers the folding part of the display and should provide some protection from debris.

Another trick Samsung used to protect from the ingress of dust and dirt is tape. The product-defining hinge along the spine of the phone is now covered in a black tape to hopefully prevent debris from entering the display area through the still-considerable gaps in the rear of the device. Tape doesn't seem like the best possible ingress protection method, but with only five months of rework time for an existing design, it's an easy quick fix. The hinge is still an engineering marvel, by the way, and iFixit has a great video of the stripped-down hinge in action.

The rest of the changes are things anyone could see from the outside of the device. The outer protective screen layer that some people erroneously removed due to it having exposed edges now no longer looks like a screen protector; it goes all the way to the edge of the display, under the bezel. There are also now T-shaped caps on the top and bottom of the Galaxy Fold's display fold, mitigating another possible area for ingress.

The whole teardown is worth a look to get an idea of the Galaxy Fold's wild design. It's basically two smartphones connected with a hinge, with two batteries, two circuit boards, two displays, and six cameras, all split across each half.

iFixit is not the only site that has gotten its hands on a retail unit of the Galaxy Fold; we'll have a full review of the device soon.