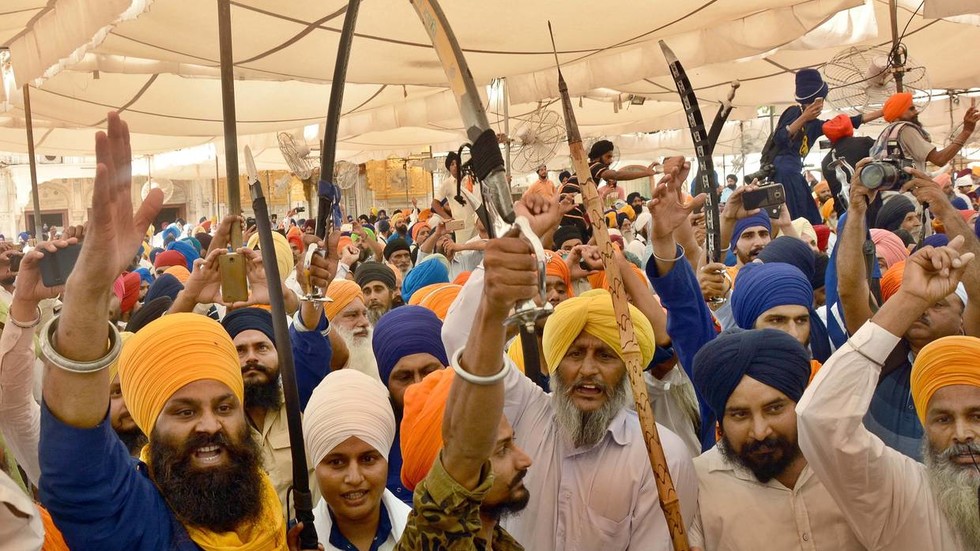 Google has come under fire from Indians who have noticed an application on its Play store that promotes a Sikh secessionist movement. Indian users sunk the app with bad reviews and reports, and have accused Pakistan of backing it.

The application, named ‘2020 Sikh Referendum,’ caught the eyes of Indian users on Wednesday. The app – which has been available from Google Play since February – seems to have had modest reach, as it’s listed to have merely 1,000+ downloads.

How can @GooglePlay, @GooglePlayDev allow Radicalization on its platform?

Is @NIA_India aware of it?

The app promotes an online secessionist campaign, launched by US-based group ‘Sikhs for Justice,’ that is calling for the creation of an independent Sikh state – so-called Khalistan. The separatist group was banned by India’s Union Cabinet this July over its alleged anti-national activities.

Indian users claimed the app has been spreading “false propaganda” against India, and called on Google to take it down. Some urged a boycott the tech giant altogether.

They flocked to the app's page, reporting it as “hateful” and accusing it of data harvesting, as well as bombarding it into oblivion with bad reviews. Another app from the same developer – the ‘Voice of Punjab’ – was targeted as well.

How can @GooglePlay, @GooglePlayDev allow Radicalization on its platform?

Is @NIA_India aware of it?

While the application has been developed by a US-registered company, many users alleged that India’s arch-enemy Pakistan was behind it.

How can Google give permission for khalistan terrorist and Pakistan to launch this app on play store😤😤😤 pic.twitter.com/N2PggiwYXc

The anger against Google Play came on top of another scandal, which had further fueled allegations of Pakistani support towards the Sikh secessionist movement. Earlier this year, the two countries agreed to open a visa-free corridor for Sikh pilgrims, that would provide them access to one of their faith's holiest sites – the tomb of Guru Nanak, located in Pakistan just four kilometers away from its border with India.

While the corridor deal became a rare example of cooperation between Islamabad and New Delhi, it was marred with various scandals, the latest of which erupted on Wednesday. An official video on the corridor released by Pakistan featured a poster of Jarnail Singh Bhindranwale – a militant leader of Sikh secessionists, killed by the Indian army during a bloody gunfight at the Harmandir Sahib (Golden Temple) complex in Amritsar, Punjab, in 1984. The military operation, known as Operation Blue Star, resulted in hundreds of civilian deaths and injuries and ultimately led to the assassination of then-PM Indira Gandhi by two Sikh bodyguards.

The Bhindranwale poster – that also read #Khalistan2020 and Referendum2020 – sparked a very angry reaction in India. Chief Minister of Punjab, Amarinder Singh, accused Pakistan of having an ulterior motive to harm India using the Kartarpur corridor.

“All this is what I have been warning about since day one, that Pakistan has a hidden agenda here. Pakistan on one side is showing love but on the other side, they can try to foment trouble. We have to be very careful of their intentions,” the minister said.