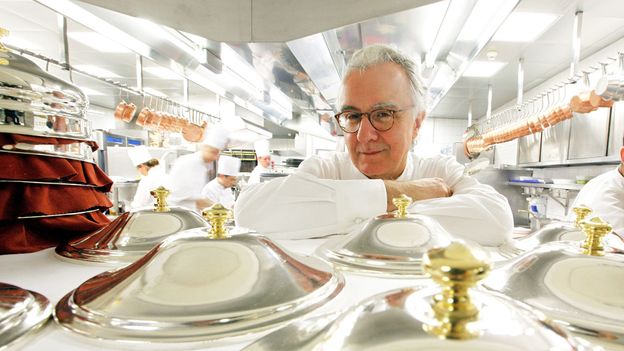 Alain Ducasse says the pandemic accelerated the evolution of French cuisine. But some are in no hurry to abandon the generations-old rituals that define the Gallic art of eating.

"French cuisine has always been in a state of movement," said famed French chef Alain Ducasse, taking a sip of crimson-hued sparkling wine, surrounded by the empty wooden tables of his Paris restaurant Aux Lyonnais. It was a warm day in March 2021. A soft breeze floated into the restaurant through the takeaway window, sunbeams illuminating the empty burgundy leather booths. The maitre d', dressed in a suit, glided between the kitchen and the curb, brown paper bags brimming with plant-based fare ready to hand off for delivery. The crinkling of the bags in motion was the loudest sound in the room.

French cuisine has always been in a state of movement

Things are different now. After months of lockdown measures, curfews and restaurant closures, Paris is slowly beginning to resemble its former self. The packed tables of cafe terrasses spill off pavements and onto boulevards, waiters once again balancing glasses of rosé on silver platters and cigarette smoke lingering in a never-fading cloud. The chirping birds along the Boulevard Saint-Germain have been replaced by the constant drone of revving engines. 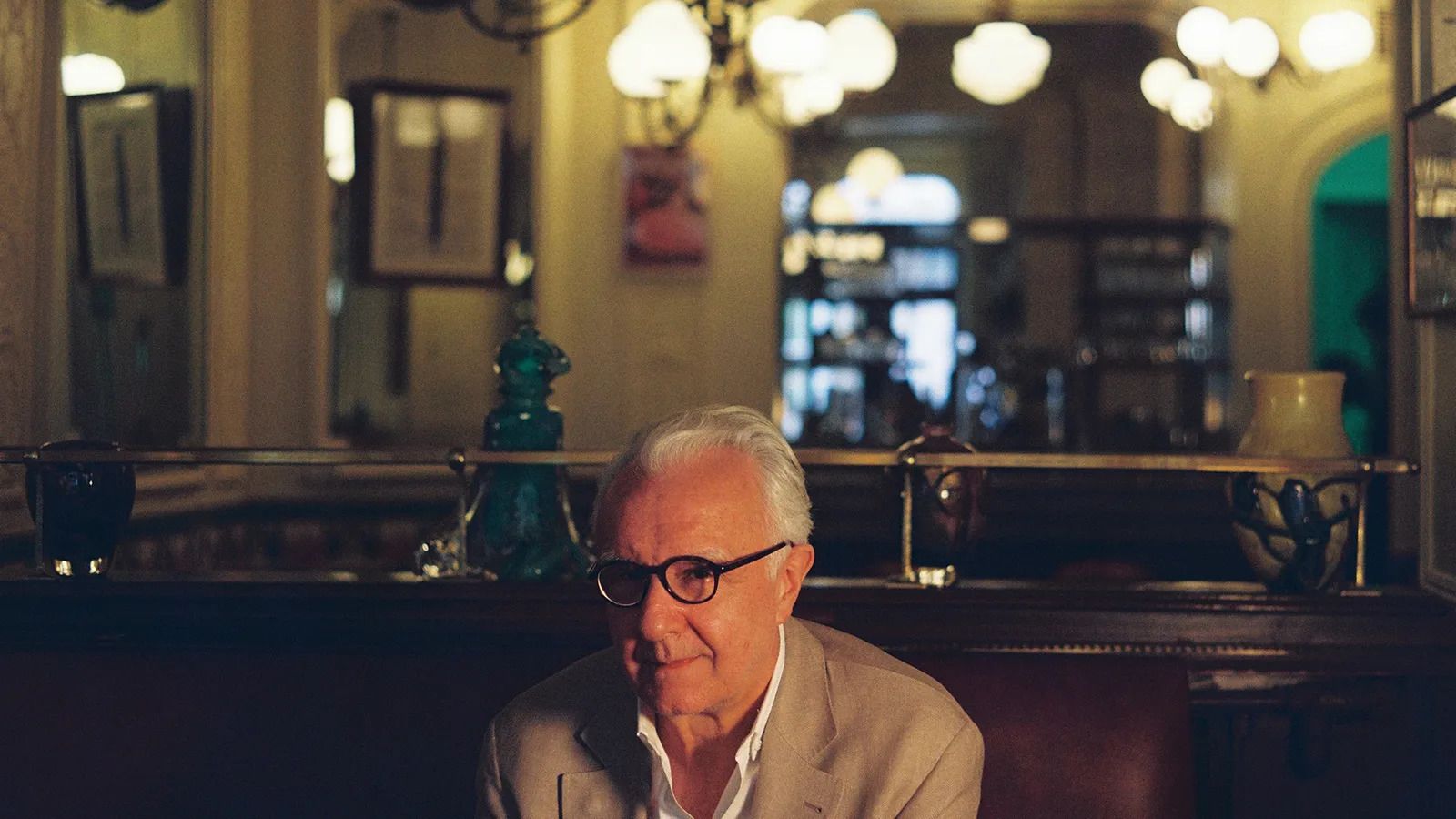 But according to Ducasse – currently the world's most Michelin-starred chef and emblematic figure of French gastronomy, often nicknamed the "godfather" of French cuisine – gastronomy had been quietly evolving behind the doors of shuttered kitchens during the pandemic's darkest days. He says Covid-19 accelerated the next "re-evolution" of French gastronomy.

In March 2020, the order to shut down restaurants due to the pandemic sent chefs into a tailspin. After getting the news on a Saturday evening with a room full of diners, Ducasse learned he would need to close at midnight, without any foresight as to when they might reopen.

Ducasse took a sip of wine. Behind him, an antique clock sat atop a mirror in the back corner of the restaurant. It was stuck on 06:43. He put a paper napkin on his lap. "The French are very strongly rooted in tradition," he said, laying out bamboo cutlery with concentration. 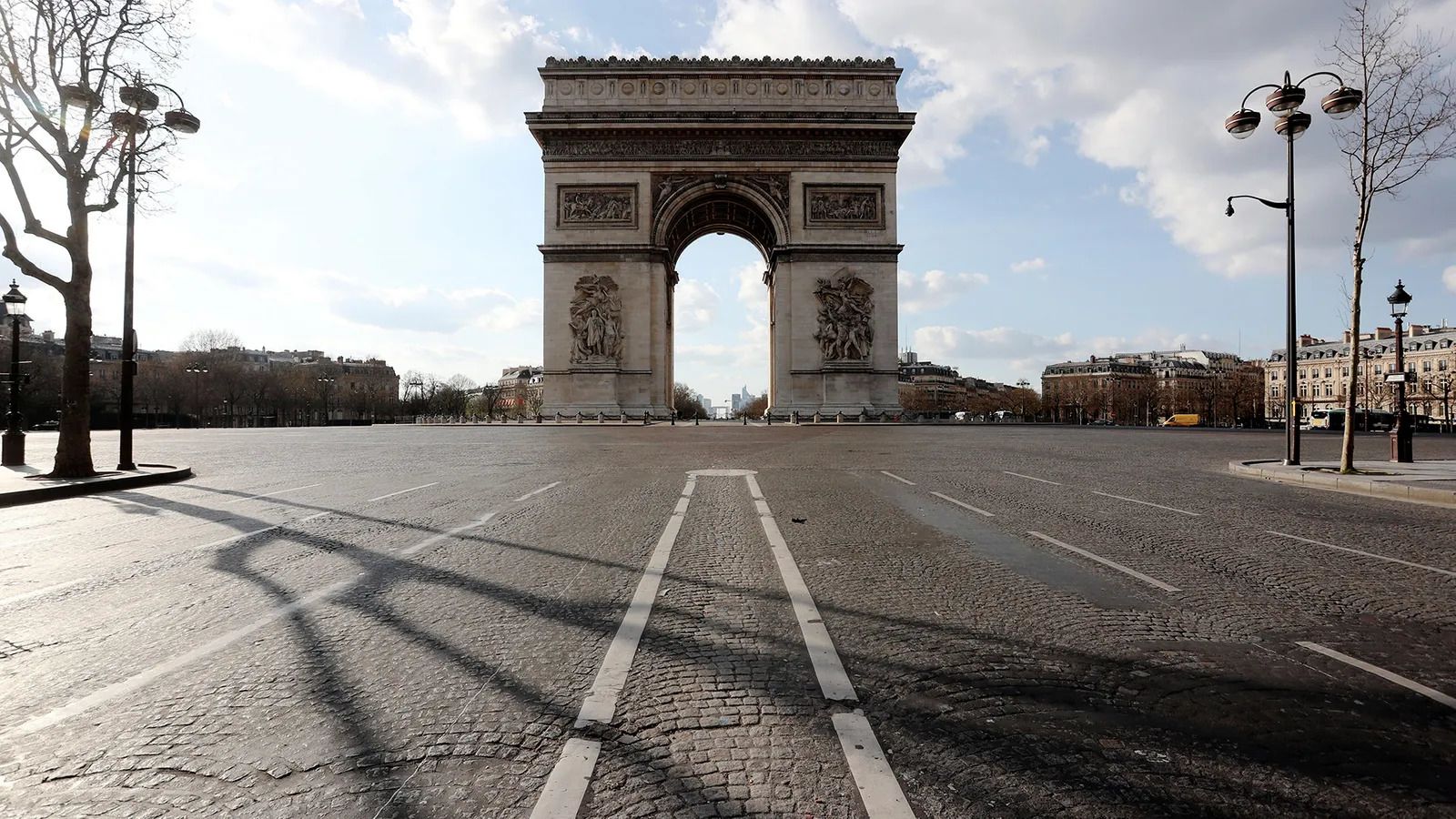 Even as the Coronavirus pandemic ground the country to a halt, gastronomy continued to quietly evolve in France

In 2010, Unesco inscribed the gastronomic meal of the French onto its Representative List of the Intangible Cultural Heritage of Humanity, permanently enshrining the French meal under its protection. However, the designation isn't just about the food. It emphasises all the traditional elements that comprise a gastronomic meal in France, from the notion of conviviality – the idea of gathering together in a warm-hearted atmosphere – to the thoughtful selection of high-quality local produce. Other elements in the designation include table setting, food and wine pairings and a fixed meal structure.

The designation underscores the importance of dining as a process, which has even been enshrined into French law: until the pandemic, for example, it had been illegal for employees in France to eat lunch at their desks.

Fast-forward to 2020 amid continued restaurant closures, where delivery drivers sped down deserted Parisian streets, shuttling Michelin-starred cuisine ready to be plated up against the backdrop of the latest Netflix series.

The re-evolution in cuisine is freedom

But Ducasse didn't see this pandemic shift as a threat to French gastronomy. It was an opportunity.

"The re-evolution in cuisine is freedom," he said. In France, such progressions aren't new. The last momentous evolution of French food – Nouvelle Cuisine, spearheaded by Paul Bocuse in the 1970s – was in large part driven by the desire by chefs to create cuisine for which they themselves would be recognised, breaking from traditional dishes to make lighter, healthier and hyper-personalised dishes that challenged some of the rules of classic French cooking.

Yet the traditional ritual around the meal remained rigid. A mere few years ago, the topic of the "doggy-bag" – bringing leftover food home from a restaurant – sparked national debate. Now, it's mandatory for restaurants to provide takeaway materials to diners in an effort to cut food waste, prompting the Ministry of Agriculture to rebrand the practice as the sexier"gourmet bag". 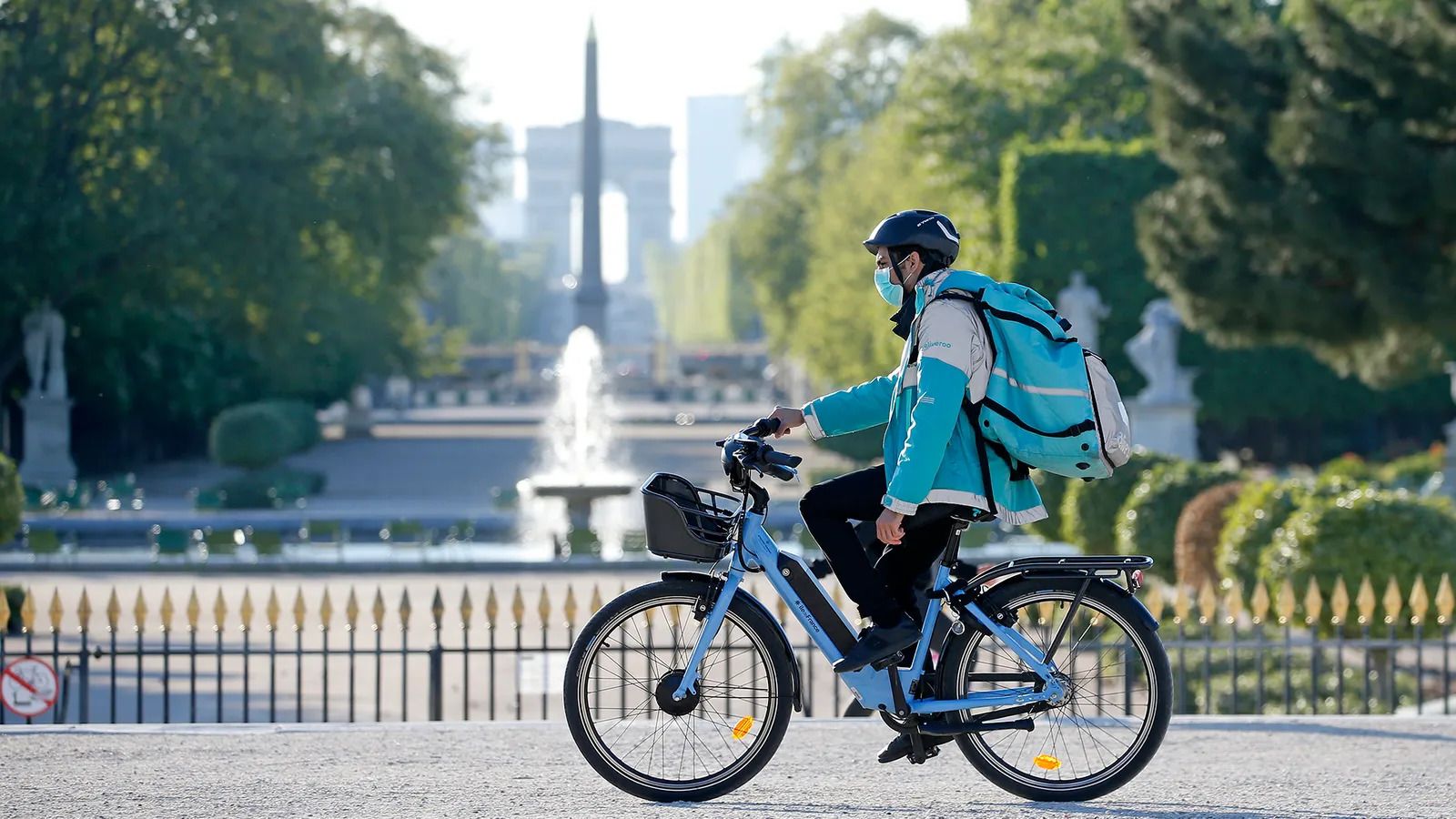 Ducasse is not a figure that one would traditionally associate with takeaway, paper napkins or cheap food. But in April 2020, Ducasse, who had never offered a takeaway or delivery service before – or even considered it – launched Ducasse Chez Moi, an online delivery platform featuring a selection of dishes from his Paris restaurants including Champeaux and Spoon. As part of the shift, he also launched Naturaliste, an inexpensive, plant-forward delivery and takeaway restaurant in the kitchen of Aux Lyonnais, behind its shuttered dining room. Essentially, a ghost kitchen.

"We would have never dared to do it if we didn't have to. It was an opportunity. Restaurants were closed, so we said we're going to try food differently," he explained. "It would be accessible; a food that we could deliver, and a food specially edited for delivery."

The new consumer is curious… Unfaithful. You have to seduce them

When I spoke with Ducasse in March, he didn't seem fazed by the transition to delivery. He was sitting up straight in his wooden chair, gesticulating with enthusiasm as he talked about his ideas for the future. The maitre d' was busy greeting customers at the takeaway window, taking orders for Naturaliste.

For Ducasse, Covid-19 sped up France's next gastronomical evolution, which he says is marked by a profound desire for human contact, an interplay between global influence and local produce, the growing role of plant-based cuisine and a rapidly evolving consumer. "The new consumer is curious… Unfaithful. You have to seduce them," he said. "You have to take them on a journey." 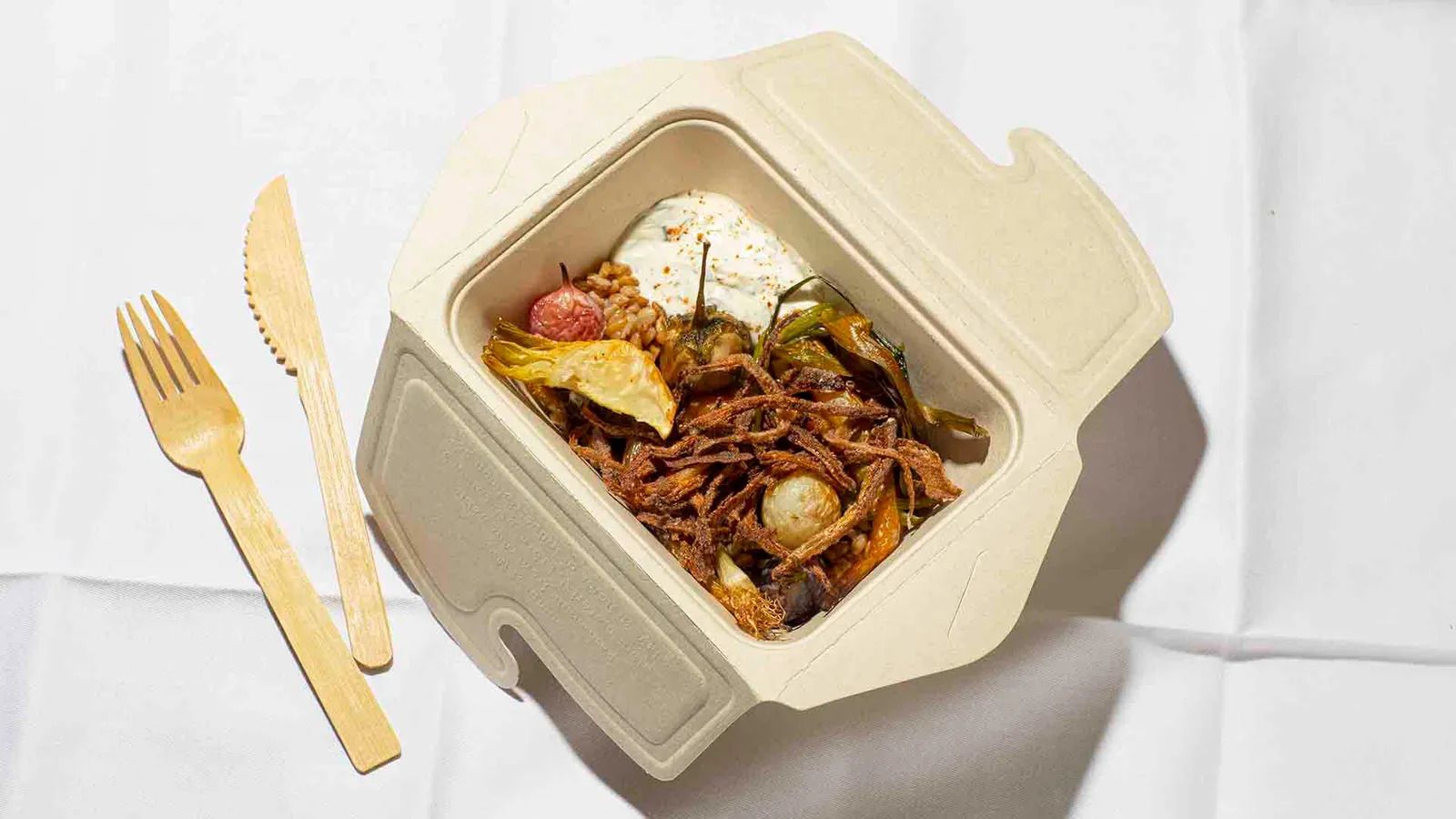 Braised spring vegetables with sumac, einkorn and mint from the Paris takeaway and delivery restaurant Naturaliste

Maryann Tebben, author of Savoir-Faire: A History of Food in France, expands on the notion of a changing consumer, reflecting on how "they hear about it, they're reading about it, they're careful about the ecological footprint that they have, and they're more savvy than their parents or grandparents were about what food does for the environment."

When I think of French cuisine, plant-based cooking isn't the first thing that comes to mind. I think of meat, of Toulouse sausage, foie gras and calf brains. But, Ducasse points out, the growing emphasis on plant-based dishes didn't happen overnight; in recent years, vegetable-forward menus have been growing in the nation's top kitchens. And at Ducasse's restaurants, this focus goes back even further.

In 1987, he introduced plant-based menu Jardins de Provence to his three-Michelin-starred Le Louis XV restaurant in Monaco. Now, "30-40% of clients choose this 100% vegetarian menu," he explained.

Patrick Rambourg, a researcher specialising in French gastronomy and the author of Histoire de la cuisine et de la gastronomie françaises(History of French cuisine and gastronomy),has also been observing the transition to more sustainable cuisine in recent years. He agrees that France is in the midst of its next culinary evolution; and in his view, it wasn't catalysed by the pandemic. Instead, the movement has been slow and profound, he believes, growing due to an interplay between changing consumer demands and the eagerness of chefs to embrace the challenge of transforming vegetables into the star of a dish.

"The chefs are aware of a changing consumer that cares about where products come from. There are also people that want to eat high-end cuisine, gastronomy, but don't want to eat something unhealthy," he said. "There's a change in consciousness around cuisine. Kitchens don't have a choice but to adapt."

However it has come about, Ducasse is embracing the shift toward sustainable, vegetable-forward cuisine. In September, Naturaliste will transform into Sapid, a more permanent plant-based restaurant centred around conviviality on Rue Paradis in Paris's 10th arrondissement. It will feature a refectory-setup with communal tables, encouraging the social contact that people lacked during the past year. 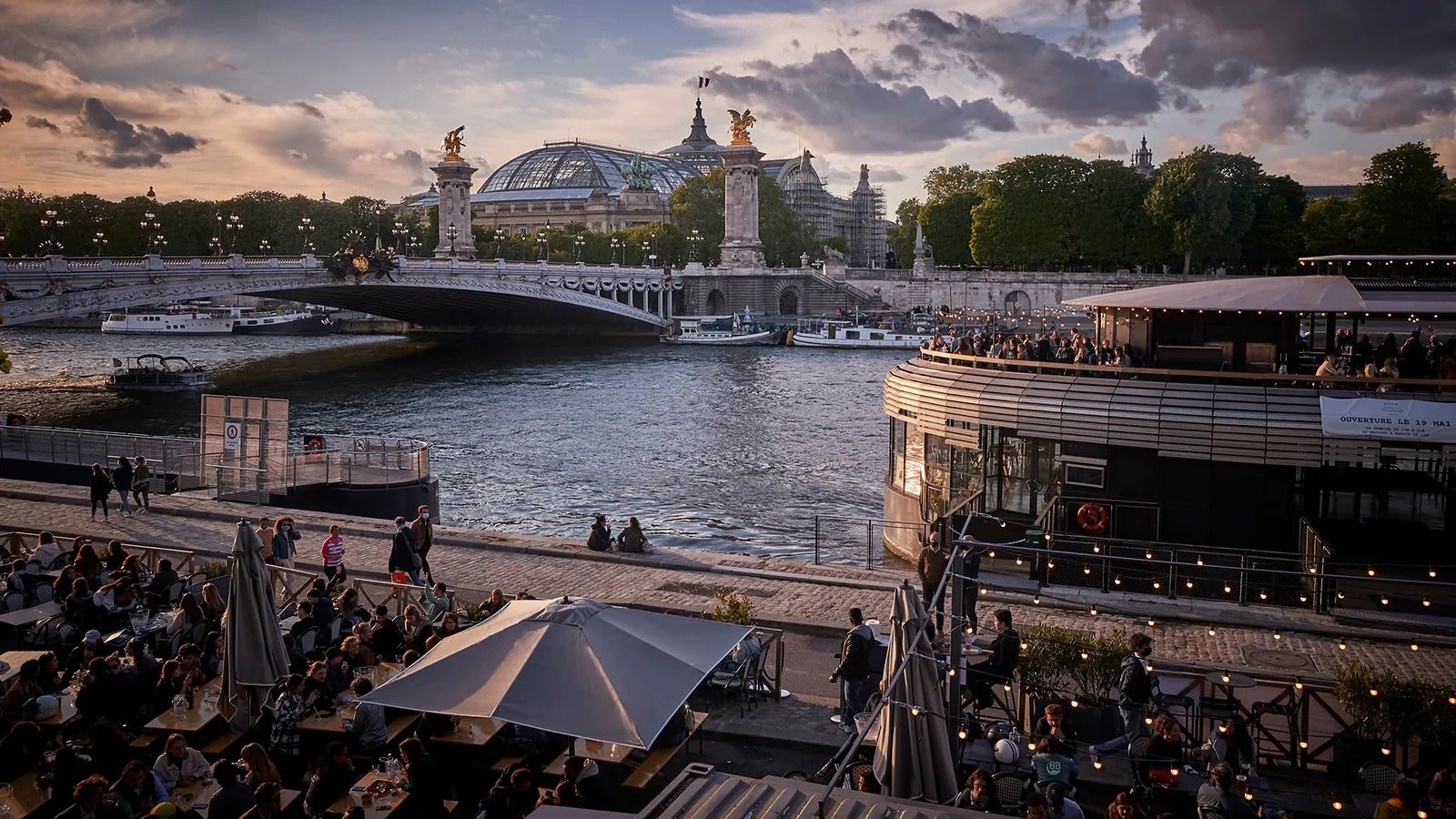 Back at Aux Lyonnais, the maitre d' reappeared and placed two cardboard boxes on the table. I peeked inside. The dishes – roasted cabbage with avocado and smoked eel, and braised seasonal vegetables with sauteed mushrooms and quinoa – were the creations of young Peruvian chef Marvic Medina Matos, who has worked in the kitchens of three Michelin-starred Alain Ducasse au Plaza Athénée and Le Meurice Alain Ducasse.

Her dishes emphasise local produce and sustainability. "We work with respect to the seasons, and our menu changes according to the season," she told me. "I love putting the producers and ingredients forward."

Ducasse frames this next re-evolution of French cuisine as "local in production, global in the vision" with careful attention to the quality of ingredients, recalling Unesco's insistence on "the balance between human beings and the products of nature".

Human beings, however, are not as malleable as farm-grown asparagus or the country's hundreds of varieties of cheese. Evolution is shaped as much by resistance as by change, and some are in no hurry to abandon the generations-old rituals that define the Gallic art of eating.

France's cultural rituals have endured wars and revolutions. Ultimately, amid a year of stay-at-home orders and delivery-bound gastronomy, have the French changed their habits?

Ducasse looked down at his glass. "They've kept the bad habits," he said with a grin, taking another sip of sparkling wine.