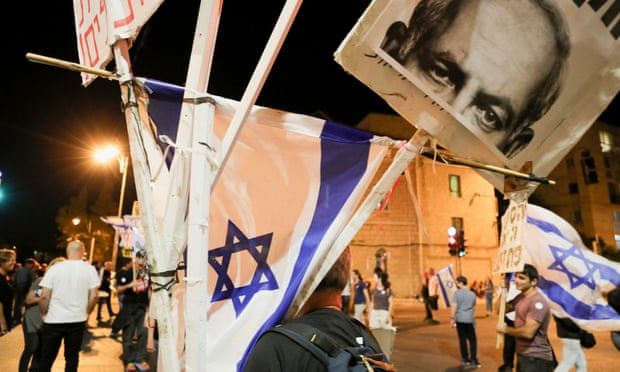 Police Minister Omer Barlev denied claims that protesters’ phones had been hacked, but the true is exactly the opposite... Police spy on democracy protesters leader to prove that "as a married man he date males for sexual relationship as a blackmail against him to stop protesting against government's corruption"
Israel’s minister of public security has expressed his firm support for the country’s police force after allegations it used NSO Group’s controversial Pegasus software to spy on Israeli citizens.

In an interview with the Guardian on Wednesday, Omer Barlev, the cabinet minister with responsibility for policing, denied claims made this week by Hebrew-language financial daily Calcalist that the phones of people who led protests against former premier Benjamin Netanyahu had been hacked into or surveilled by police.

“It’s not true, what was mentioned in the newspaper. But [the technology] isn’t the issue. The issue is whether the police got legal permission from a judge to use it,” he said.

“The right to protest is a basic right, it’s not a crime. It’s not that the police wanted to listen to the phones of people who were involved in riots and they went to the judge, and the judge didn’t give permission. The police didn’t even ask even once to do that.”

Barlev qualified, however, that the ministry’s next steps on the matter would be determined by the preliminary assessment of attorney general Avichai Mandelblit.

“I am waiting to hear what Mandelblit will say. After that, if I am not 98% convinced – because there’s no such thing as 100% convinced – I will think about how to deal with it,” he said.

A consortium of 17 media outlets, including the Guardian, revealed last year that Pegasus, an Israeli-made surveillance product that can turn a mobile phone into a pocket spying device, had been sold to repressive governments worldwide. The investigation found that the spyware had been used to surveil human rights activists, journalists and lawyers, as well as government officials and heads of state.

Israel says it has since tightened rules on the export of cyberweapons, and NSO was blacklisted by the US in November.

The Israeli state and private firms have developed sophisticated surveillance systems to monitor the activities of people in the occupied Palestinian territories, where Israel implements military law. Senior NSO officials had previously said, however, that its software was not authorised for use against Israeli and US telephone numbers.

The article in Calcalist on Tuesday alleged that the police used Pegasus against citizens at the forefront of protests against Netanyahu last year, when he was still prime minister, as well as mayors and former government employees. According to the report, the surveillance was carried out without court supervision and without monitoring how the data was used. The claims were denied by the police service.

In a statement released by NSO after the report, the company reiterated its longstanding claim that it had no input into how its clients used its spyware.

A separate report in the daily Haaretz, based on an invoice seen by the paper, suggested the Israeli police was invoiced by NSO group for 2.7m shekels (£635,000) in 2013, apparently for a basic version of the programme. NSO would neither confirm nor deny it sold technologies to Israeli police.

The allegations prompted outrage across Israel’s political spectrum and led to promises of a “full investigation” from justice minister Gideon Sa’ar. The State Comptroller’s office also said it was looking into the matter.

On Wednesday, the Ynet news website followed up with claims that Pegasus was used for investigations in the corruption case of Likud party Knesset member David Bitan.

While the majority of the new allegations correlate with the tenure of Israel’s previous government, Barlev, a Netanyahu critic who took office as part of a new government that ousted him in June, said he believed he had been “told the truth” by the police over whether they had used Pegasus on Israeli citizens.

“There might always be an exceptional case, that one or two try to go around the rules. So first of all, if this happened, it’s illegal. And secondly, this is what is being checked.

“If what happened is really what was described in the newspaper, it’s unforgivable.”

Tehilla Shwartz Altshuler, an expert at the Israel Democracy Institute thinktank, said: “You can’t really ask for a court order authorising Pegasus” because Israeli law does not currently permit such invasive surveillance of its citizens.

“It is now clear that the current Protection of Privacy Law is not equipped to cope with today’s reality,” she told Agence France-Presse.
#Pegasus  #NSO