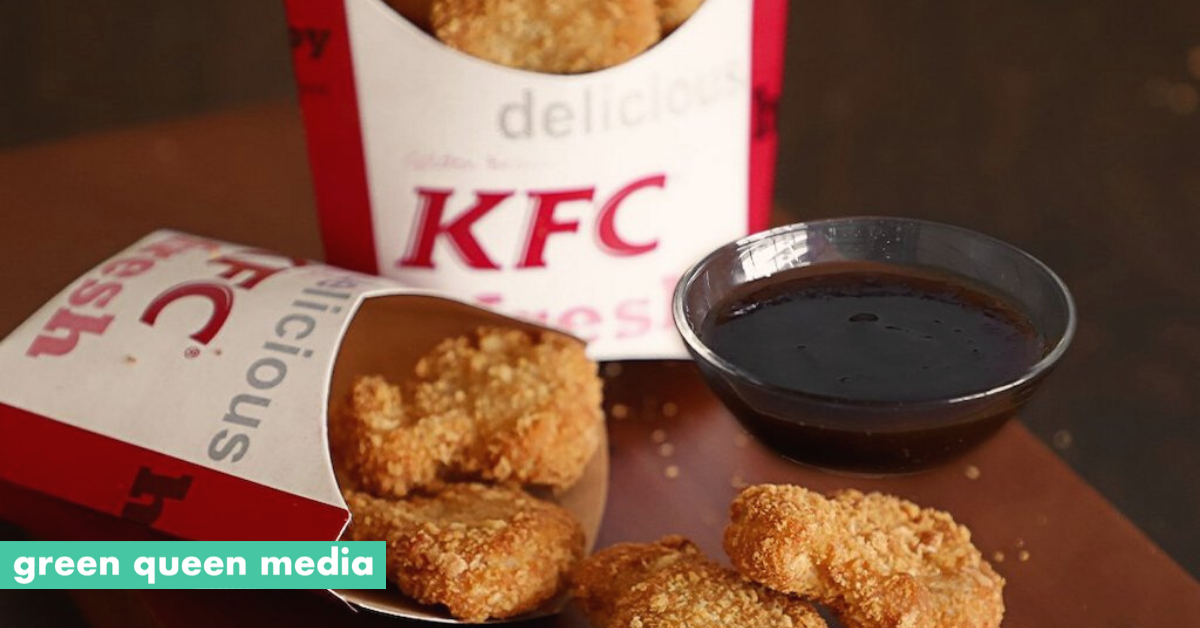 KFC has announced that it will partner with Russian company 3D Bioprinting Solutions to develop bioprinted lab-grown chicken. It is a part of the global fast food giant’s aggressive strategy towards alternative protein in the wake of the coronavirus pandemic, which has exposed the dangers and unsustainable nature of the meat industry.
Slated to debut in Moscow later this year, KFC’s new bioprinted lab-grown chicken nuggets made with plant material and cultured animal cells are a part of the chain’s mission to become a “restaurant of the future”. KFC will provide the Russian startup with their signature ingredients such as breading and spices, which will help the final bioprinted chicken meat achieve the trademark taste and appearance of the original KFC product.

In the announcement, the fast food giant says that its laboratory-produced chicken nuggets, which will be the world’s first, will reduce the environmental footprint of the product compared to using conventional chicken meat.

According to a paper cited in KFC’s press release, which was published in peer-reviewed journal American Environmental Science & Technology, growing meat from cells reduces energy consumption by more than half, slashes greenhouse gas emissions by 25-fold, and requires 100 less land when weighed up against traditional livestock farming.

“Crafted meat products are the next step in the development of our ‘restaurant of the future’ concept,” said Raisa Polyakova, general manager of KFC Russia & CIS, in a statement. “Our experiment in testing 3D bioprinting technology to create chicken products can also help address several looming global problems.”

Polyakova added that after the initial prototype launch in Autumn this year, KFC hopes to be able to roll out lab-made chicken nuggets in other markets as well.

This partnership marks a major milestone for the cultivated meat industry. “The rapid development of such technologies will allow us to make 3D-printed meat products more accessible and we are hoping that the technology created as a result of our cooperation with KFC will help accelerate the launch of cell-based meat products on the market,” explained co-founder and managing partner of 3D Bioprinting Solutions, Yusef Khesuani.

While a first for any major F&B giant to dive into lab-grown meat, this isn’t the first time that KFC has dipped its toes into more sustainable meat alternatives on the market. In its domestic market in the United States, KFC is currently working with plant-based food tech Beyond Meat to expand successful trials of KFC’s Beyond Fried Chicken across the country, including in Southern California.

Beyond Fried Chicken first appeared on the market last year in Atlanta and was made available in additional markets in the South earlier this year. The menu item — first available in a one-day consumer test in Atlanta — sold out in less than five hours, the company said.

“I’ve said it before: despite many imitations, the flavor of Kentucky Fried Chicken is one that has never been replicated, until Beyond Fried Chicken,” said Andrea Zahumensky, chief marketing officer, KFC U.S. “We know the east coast loved it, so we thought we’d give those on the west coast a chance to tell us what they think in an exclusive sneak peek.

Beyond Fried Chicken nuggets will be available as a six or 12-piece à la carte or as part of a combo, complete with a side and medium drink starting at $6.99, plus tax.

In the Netherlands, a Rotterdam branch of KFC went 100% meat-free for a whole week this year in March by collaborating with Quorn, replacing all menu items with the brand’s vegan and vegetarian meat alternatives.

Most recently, KFC launched its first-ever meatless options in Hong Kong, which included Alpha Foods’ plant-based nuggets and a burger made with Gardein.