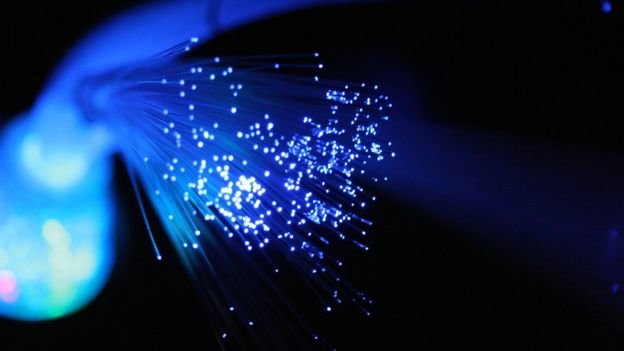 Labour pledges free broadband for all

Labour has promised to give every home and business in the UK free full-fibre broadband by 2030, if it wins the general election.

The party would nationalise part of BT to deliver the policy and introduce a tax on tech giants to help pay for it.

Shadow chancellor John McDonnell told the BBC the "visionary" £20bn plan would "ensure that broadband reaches the whole of the country".

The Tories said it was "fantasy plan" that would cost taxpayers billions.

BT chief executive Philip Jansen told BBC News he was happy to work with whoever wins the election to help build a digital Britain.

But, he added, the impact of any changes on BT pensioners, employees, shareholders - and the millions of investors via pension schemes - needed to be carefully thought through.

According to a report from regulator Ofcom earlier this year, only 7% of the UK has access to full-fibre broadband.

The government hit its target to bring superfast broadband to 95% of homes by December 2017 - at a cost of £1.7bn - but the internet speeds are significantly lower than those of full-fibre.

Mr McDonnell told the BBC's Laura Kuenssberg Labour would add an extra £15bn to the government's existing £5bn broadband strategy, with the money to come from the party's proposed Green Transformation Fund.

The plan includes nationalising parts of BT - namely its digital network arm Openreach - to create a UK-wide network owned by the government.

"We're putting the money in and therefore we should own the benefit as well," said the shadow chancellor.

He said the roll-out would begin with communities that have the worst broadband access, followed by towns and smaller centres, and then by areas that are currently well-served.

A Labour government would compensate shareholders by issuing government bonds. He said Labour had taken legal advice, including ensuring pension funds with investments in BT are not left out of pocket.

As with other planned Labour nationalisations, he said MPs would set the value of the company at the time of it being taken into public ownership.

Having already announced plans to nationalise water, rail and now broadband, Mr McDonnell said this latest plan was "the limit of our ambitions".

A new entity British Broadband would run the network, with maintenance - estimated to cost £230m a year - to be covered by the new tax on companies such as Apple and Google.

"We think they should pay their way and other countries are following suit," said Mr McDonnell.

Labour has not yet completed the final details of how the internet giant tax would work saying it would be based 'percentage wise'' on global profits and UK sales, raising potentially as much as £6bn.

Mr McDonnell said that if other broadband providers did not want to give access to British Broadband, then they would also be taken into public ownership.

Broadband is now a major political issue, but on one thing all sides are agreed: the UK has fallen behind competitors in rolling out a fibre network - the gold standard where a fibre optic cable arrives directly into your home - and way behind countries such as Spain, Portugal and Norway.

When he was running for the Tory leadership Boris Johnson described the broadband strategy of Theresa May's government as "laughably unambitious", and promised £5bn to hit what the broadband industry thinks is an extremely ambitious target.

Now, Labour has come back with a plan that may be more realistic in time scale but is far more expensive in terms of state spending.

What is not clear is what happens to the wider broadband market - from Virgin Media and Sky to the raft of fibre broadband firms that have sprung up in recent years.

Labour is indicating that the companies "may want to come on board" with its scheme - but it is hard to believe that after years of complaining about BT stifling competition, they will be enthusiastic about competing with a state-owned monopoly.

The question for consumers may be who they should trust - broadband suppliers with patchy records on customer service or the state.

The shadow chancellor claimed such a scheme would also have positive effects on the environment, due to a reduction in commuting and enabling people to move out of cities to rural areas - and bring economic and social benefits.

"Corbyn is clearly so desperate to distract from his party's divisions on Brexit and immigration that he will promise anything, regardless of the cost to taxpayers and whether it can actually be delivered. What reckless idea will be next?"

The Tories say the full cost of Labour's plan would be £83bn over 10 years, rather than the £20bn claimed by Labour, as they had greatly underestimated the cost of re-nationalising parts of BT, broadband roll-out and salary costs.

Julian David, chief executive of TechUK, which represents many UK tech firms, said: "These proposals would be a disaster for the telecoms sector and the customers that it serves.

"Renationalisation would immediately halt the investment being driven not just by BT but the growing number of new and innovative companies that compete with BT."

Labour has costed its policy from a report produced by Frontier Economics in 2018, which was originally produced for the Department of Digital, Culture Media and Sport.

The report says that when Australia embarked on a similar scheme there was a lot of initial delay over contracts, lasting several years, before any rollout began.

However, once a rollout starts, Frontier says a nationalised programme can deliver relatively quickly.