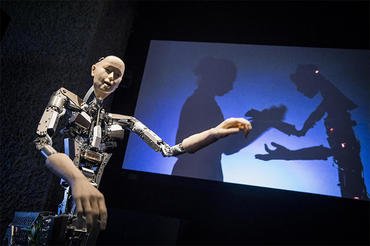 If you're in London over the summer, check out the Science Museum and the Barbican for this trio of IT-related exhibitions.
London, and particularly the Science Museum, has a long, solid history of mounting exhibitions on information technology topics, from its 1991 reconstruction of Babbage's Difference Engine to the industrial robots it featured in the late 1990s (which health and safety insisted should be behind glass), their humanoid fellows in 2017, and the 2014 exploration of the information age.

This summer, the city has three such exhibitions running simultaneously, two of them at the Science Museum. You could summarize them as : 1) What have you done for us lately?; 2) What are you going to do for us?; and 3) Why is it taking so long?

he first is GCHQ's romp through the history of keeping secrets, Top Secret: From ciphers to cyber security. This moves from the earliest times through Mary Queen of Scots' coded letters to World War II (GCHQ's formation, Bletchley Park and Alan Turing) and the Cold War. A final section focuses on GCHQ's current incarnation, featuring a Lego model of its offices and an introduction to cyber security.

The central part of the exhibit includes many historical encryption machines including the Enigma machine, Margaret Thatcher's secure briefcase telephone, and the secret compartment cigarette lighter used by the undercover 1950s Russian spies, Helen and Peter Kroger. A GCHQ failure is present in the form of the Zircon spy satellite, which was scrapped in 1987 after investigative journalist Duncan Campbell exposed its existence.

Unfortunately (but perhaps predictably), GCHQ wants to reveal only some of its secrets: explanations of how the various machines work are variable, and the provided material fails to explain the technical progress from one machine to the next. Including some aspects of military history was, I suppose, inevitable, but it's not clear why the 1940s motorcycle was necessary. If you want to seriously understand the technical progress of keeping secrets, see the machines demonstrated, or even fiddle with replicas to understand how they work, you'll find this all a bit frustrating.

Upstairs, also at the Science Museum, Driverless: Who is in control? presents the potential future for autonomous vehicles. There are actually more amphibious vehicles than cars, although the star of the show is the artist Dominic Wilcox's stained glass concept car. The lack of visibility and the bedroom-style interior suggest a time when these cars are so safe and capable that we can sleep en route. Personally, I'd at least like to see the scenery I'm driving through.

Also present is the yellow long-range autonomous submarine Boaty McBoatface, the Capri mobility pod intended to shuttle up to four people on demand, and videos and images of many more. Other elements include a playable version of MIT's Moral Machine version of the trolley problem, and video discussions of various practical issues surrounding human adaptation to autonomous cars.

One note that seems somehow typical of this haltingly-arriving future: Drive.ai, displaying car-mounted signs to warn pedestrians ("Going Now - Do Not Cross"), was nine days from bankruptcy in early July, until Apple bought it.

The Barbican's AI exhibit, AI: More than Human, is altogether more elaborate, noisy, and comprehensive. The heart of the thing -- unfortunately, because it's mounted in the area with the least space and nowhere to sit while paging through it -- is a scrollable timeline of decades of AI development incorporating pictures and text. I'd recommend buying the catalogue (£29) so you can work through it at leisure, except that 1) the printed timeline has been truncated, and 2) whoever chose the paper and ink colours does not have human eyesight. The catalogue has an entire section printed in bright orange ink on only slightly paler orange paper. Even early Wired had better readability.

In the areas leading up to and past the timeline, installations show off millennia of human efforts to build artificial companions, beginning with the Golem and rambling through science fiction stories and films, AlphaGo, and several hands-on demonstrations. One of these lets kids play with a Sony Aibo under supervision. A video shows an interaction with a real dog, which looks at the camera as if to say, "What the hell is this?" The dog makes an attempt to smell the Aibo's butt and gets no response. If it could talk, you think, it would be saying "#Fail".

All three exhibitions are worth the time, but the AI exhibition -- which unfortunately closes soonest -- deserves the most attention. In 1956, AI pioneer John McCarthy thought the brain trust assembling at Dartmouth for the first AI conference would have the whole thing wrapped up in six months. This exhibition explains why we're still waiting.