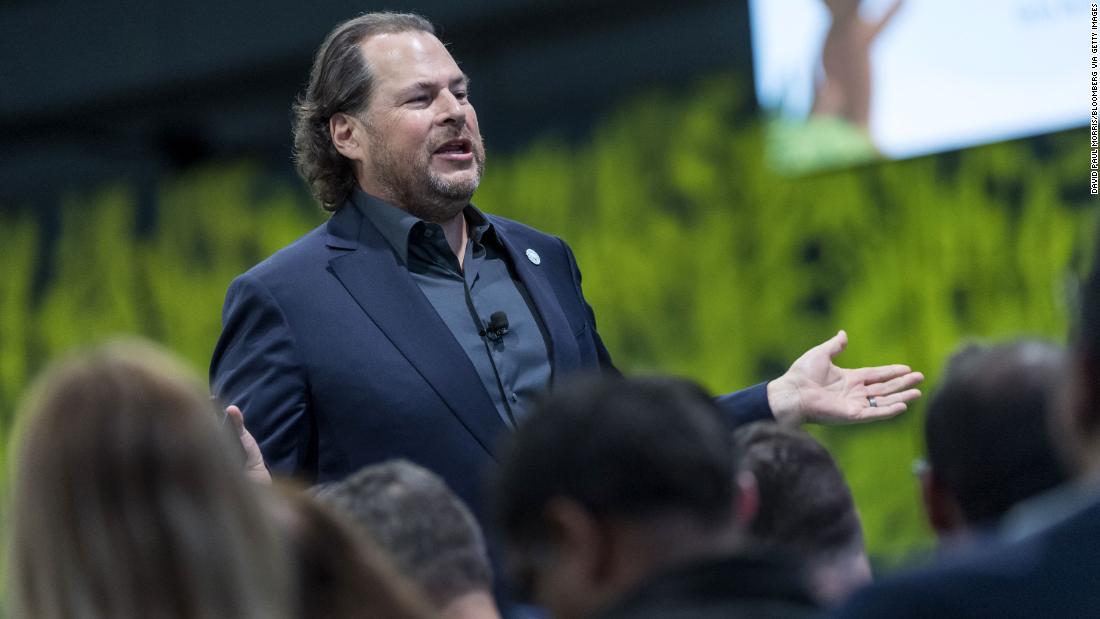 He said Time can be part of the solution by continuing to carry out its journalistic duty.

But the challenges are daunting, he said. "When you look at what's happening with social media, when you look at the types of decisions that are being made in regards to artificial intelligence and these next generation of technologies, especially as it's with regards to media, well, we're finding ourselves quite vested in a crisis of trust."

The Salesforce (CRM) chairman and his wife, Lynne Benioff, bought TIME from Meredith Corporation (MDP) for $190 million in 2018. The couple is just one among a series of billionaires who have scooped up legacy media titles in recent years, including Jeff Bezos, who owns the Washington Post, and Laurene Powell Jobs, who owns a majority stake in The Atlantic.

Benioff said he wanted the magazine to be "unshackled" from financial constraints to carry out its mission to provide truthful, trustworthy information to readers.

"Time magazine can be a steward of trust," Benioff said. "It's one of the core values of Time: trust, impact, the core magazine itself, and that it's about equality."

And he said it's working. Benioff said the print edition of Time is "probably more popular than ever," even as many other legacy print outlets struggle to compete with digital news. He claimed Time's most recent issue, its annual "Person of the Year" feature, is "probably the most successful issue of Time magazine of all time."

After the magazine named Greta Thunberg its person of the year for 2019, it raised some questions about the kind of influence Benioff - who has been outspoken about the need to address climate change - has at the magazine. But Benioff said that when he purchased the magazine, he decided not to get involved in editorial or operational decisions.

As for some of the causes of this "crisis of trust," Benioff again criticized Facebook (FB), something he has repeatedly done in recent years.

"Well, you can see Facebook is the new cigarettes for our society. It's something that badly needs to be regulated," he said. "They're certainly not exactly about truth in advertising. Even they have said that. That's why we're really in squarely a crisis of trust, when the core vendor themselves cannot say that trust is our most important value. Look, we're at a moment in time where each one of us in every company has to ask a question: What is our highest value?"

Benioff has called for the social media giant to be broken up - at the same time that the company has faced pressure from federal officials and state attorneys general over antitrust concerns. And on Sunday, Benioff said he really does expect to see Facebook divided.

"I expect a fundamental reconceptualization of what Facebook's role is in the world," Benioff said. "When you have an entity that large with that much potential impact, and not fundamentally doing good things to improve the state of the world, well, then I think everyone is going to have it in its crosshairs."

Facebook pushed back on the idea that it would be broken up.

"While some may see antitrust action as a catch all solution to address all social policy, the fact is that antitrust law is not intended to punish a company because you disagree with its leadership, dislike the product, or to impose liability where companies are seeking to compete vigorously- and even win - on the merits," a Facebook spokesperson said in a statement.
#Facebook