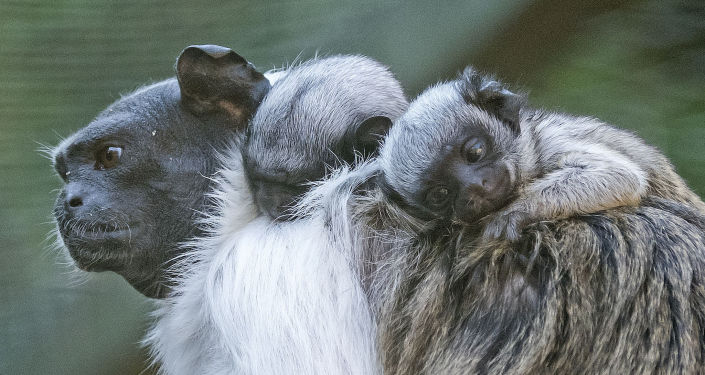 Monkeys of Amazon Change Their 'Accent' to Avoid Conflicts With Congeners, Study Says

Scientists made the discovery after studying the behavior of 15 groups of two types of tamarin monkeys residing in the Brazilian Amazon. They found that when red-handed tamarins enter their territory, they mimic pied tamarins' long calls in order to avoid territorial and resource fights.

When Red-handed tamarins, species of New World monkeys, reach another species' territory, they will utilize the "accent" of that species to assist them to better understand one another and maybe prevent violence, according to a new research.

The study, which was published in the journal Behavioral Ecology and Sociobiology, is the first to establish asymmetric call convergence in monkeys, which means that one species chooses to communicate using the sound patterns of another species, according to its authors.

The authors of the study believe that the red-handed tamarins keep the peace by using their greater vocal flexibility, which includes a significantly greater usage of calls than pied tamarins.

It can be difficult to tell tamarin species apart, according to lead scientist Tainara Sobroza of the Instituto Nacional de Pesquisas da Amazonia in Brazil, who is quoted in the Daily Mail report regarding the publication.

"During our research, we were surprised to discover they also sound the same in the areas of the forest they cohabit," she said. "We found that only the red-handed tamarins change their calls to those of the pied tamarins, and this only happens in places where they occur together. Why their calls converge in this way is not certain, but it is possibly to help with identification when defending territory or competing over resources."

The co-author of the study, Dr. Jacob Dunn, associate professor of Evolutionary Biology at Anglia Ruskin University in the UK said that this was the first study to show asymmetric call convergence in monkeys, with one species' sound becoming the "lingua franca" in shared territory.

"We have long known that when closely related species overlap in their geographic ranges, we are likely to see interesting evolutionary patterns," Dunn is quoted in the report as saying. "Because these tamarin species rely on similar resources, changing their 'accents' in this way is likely to help these tiny primates identify one another more easily in dense forest and potentially avoid conflict."

Pied tamarins are critically endangered and have one of the world's smallest ranges, with much of it concentrated around the city of Manaus, whereas red-handed tamarins can be found across the north-eastern Amazon region.