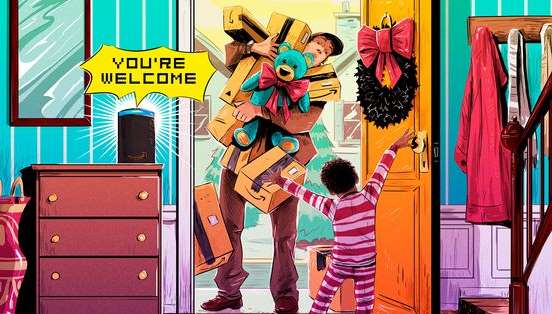 Move Over, Santa! Kids Are Asking Alexa to Bring Them Presents

Ordering items from Amazon has never been easier, but young children are asking Alexa to deliver them presents and parents aren’t always able to step in before packages are on the way.
Zibby Owens was in therapy a few months ago when her phone started buzzing with notifications. They were texts from Amazon confirming that several “Paw Patrol” toys were en route to her house.

“It was one after another,” said Ms. Owens, a New York-based podcast host.

She said she had allowed her son, then 4, to use her iPad while she was getting ready that morning. It had an Amazon.com shopping app on it. Her little boy figured out how to touch the microphone icon in the search bar in the Amazon app and say “Paw Patrol.” Amazon’s voice assistant, Alexa, obeyed, bringing up numerous toys from the popular children’s show. The little boy managed to add more than a dozen items to the cart and tap “buy.”

Ordering items from Amazon has never been easier. There are now more than 100 million Alexa-enabled devices around the world used by tens of millions of customers each month-in kitchens, bathrooms, even cars. People can place orders from just about anywhere.

For children too young to spell, Alexa has opened a magical world that rivals the North Pole. For parents with such precocious youngsters, muzzling Alexa is a must.

By the time Ms. Owens reviewed all the orders, it was too late to cancel them. “Boxes and boxes arrived. He was jumping up and down with excitement that he had ordered all this stuff,” she said.

Ms. Owens let her son keep a board game and she saved some items to use as birthday gifts for other children. She shipped back the rest, which led to many tears. She also deleted the shopping app from her iPad.

Resourceful kids have found success-or at least partial success-using only their voice, no app required.

Josue Sierra came home from work one day and found a package from Amazon containing Tesla-branded running pants. When he asked his wife if she had ordered them, his then 5-year-old son walked in and said, “That’s not what I ordered. I wanted a Tesla.”

His son had placed the order with Alexa on the family’s Echo.

“We thought it was funny and sent the pants back,” said Mr. Sierra, a digital marketing executive in Elkton, Md. “I immediately went into the app on my phone and activated the voice PIN.”

Parents can have Alexa devices set a PIN that needs to be spoken before making a purchase. Parents can also turn off voice purchasing from Amazon. When a parent enables FreeTime (including Amazon’s parental controls) on an Echo device, or uses the Echo Dot Kids Edition, all voice purchasing is automatically disabled.

Parents can passcode-protect Fire tablets and disable shopping entirely, or require a confirmation code that Alexa will prompt users to say when they want to place an order from Amazon. Alexa doesn’t work in FreeTime on any Fire tablets.

Parents who use the Amazon shopping app on Apple and Android devices can disable the 1-Click order setting to prevent children from bypassing the shopping cart and placing an order automatically. On Apple devices, parents can go into the Login & Security section of their Amazon shopping app’s account settings and choose to require fingerprint login or facial recognition to access the app, which could be a pain for frequent Amazon shoppers. The other option, of course, is to keep the app off devices that the kids frequently use.

Brendan Dickinson nearly ended up with 100 boxes of dead-fish and spoiled-milk Jelly Bellys. Mr. Dickinson was making pancakes one morning last summer when his then 3- and 6-year-olds were playing the gross-out jelly-bean game BeanBoozled. When he left the room momentarily, he heard one of his kids say to the Echo Show device, “Alexa, buy 100 BeanBoozled.” He checked his Amazon app and canceled the order right away.

“We had a conversation about what this all means and it never happened again,” said Mr. Dickinson, a partner at a venture-capital firm in New York. “I did tell them it’s totally cool that they ask Alexa what the weather is.”

Joe Ross was riding the train home from work one evening a couple of years ago when he got an email notification that an American Girl doll was on its way. He figured his wife had ordered it for their then-5-year-old daughter for Christmas. But then he got another notification for the same doll, and then another.

Mr. Ross, an economist who was living in New Jersey at the time, thought his Amazon account had been hacked, so he called the company and was told the orders had been placed through Alexa on his Sonos speaker. It turned out his daughter had repeatedly said something like, “Alexa, buy me the best American Girl doll.”

Mr. Ross was able to cancel the orders before they shipped, and he added a passcode to his account.

Allison Slater Tate’s daughter, Lucy, won a Fire tablet in a kindergarten raffle two years ago. The day she brought it home, Ms. Slater Tate and her husband were leaving for a college reunion out of town and didn’t even think to set up parental controls. “I thought she would read books and play games,” she said. “I didn’t think she’d end up on Amazon.”

But when she was at her reunion, Ms. Slater Tate began receiving numerous notifications about purchases. One was a large play grocery set. Lucy had ordered some $300 worth of toys. By the time Ms. Slater Tate, a freelance writer near Orlando, Fla., called home and talked to the babysitter about what had happened, the items had shipped. Ms. Slater Tate suspects Lucy had searched for one toy and then saw dozens of other suggested items.

Ms. Slater Tate said her husband wanted to send everything back but she said the thought of returning it all was too much, so she kept everything and doled out the toys throughout the year.

“I thought everything was free and I could buy whatever I wanted,” said Lucy, now 7.
#Tesla