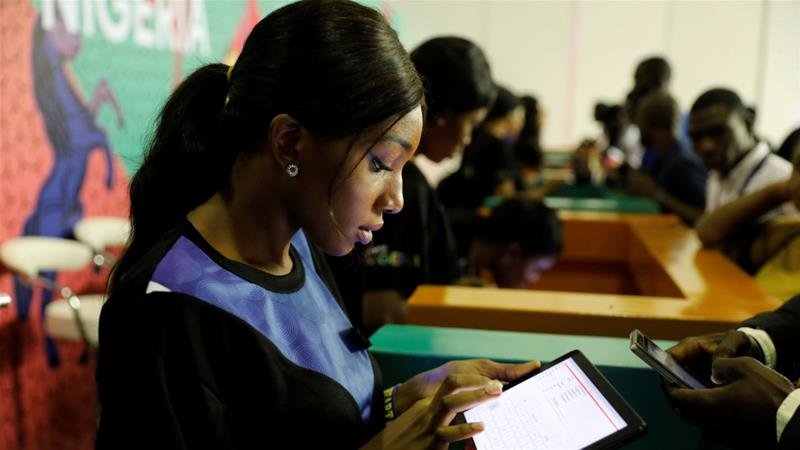 Tens of thousands of Nigerians have banded together online to call for the scrapping of a bill which, they say, threatens to roll back internet freedoms in the country.

The proposed legislation - officially named the Protection from Internet Falsehood and Manipulation Bill 2019 - would allow Nigeria's government to cut off internet access or block specific social media platforms such as WhatsApp, Facebook and Twitter at its own discretion.

Otherwise known as the Social Media Bill, the proposed act also contains provisions prohibiting statements online deemed "likely to be prejudicial to national security" and "those which may diminish public confidence" in Nigeria's government - offences that would be punishable by fines of up to 300,000 Naira ($825) or imprisonment for up to three years.

Legislators backing the bill, which is advancing through Nigeria's Parliament, claim it will enhance security, peace and unity in Africa's most populous country by curbing the spread of "false statements".

But critics argue it could gag free speech, with many now speaking out via the very platforms they say are at risk of being curtailed.

More than 85,000 people have signed an online petition demanding the bill be done away with. The bill's "aim is to curb our use of social media with the reasoning that the Senate wants to curb the spreading of false information when in reality they want to limit our freedom of speech and our right to criticise them", the petition says.

A campaign on Twitter saw the #SayNoToSocialMediaBill hashtag top the platform's trending charts in Nigeria recently.

"The Protection from Internet Falsehood and Manipulation Bill ... is a backdoor approach to silence critical voices in Nigeria," said Adeboye Adegoke, a digital rights advocate and programme manager at the Nigeria-based social enterprise Paradigm Initiative.

"[It is a] dangerous path to tread ... [and] will serve to provide a legitimate justification for many illegitimate things that the Nigerian government already do," he told Al Jazeera.

Despite the opposition, the legislation has continued its passage through Nigeria's legislature, passing a second reading and subsequent vote in the Senate in late November.

It has since been moved to the Senate's Committee on Judiciary, Human Rights and Legal Matters for a period of further consideration which could last up to four weeks.

Senator Godiya Akwashiki, a spokesman for the Nigerian Senate, said the open discussions would allow for citizens' concerns over the effect of the bill to be aired.

"Nigerians still have a say over the bill during the public hearing," Akwashiki told Al Jazeera. "[It] is an opportunity for the general public to express their views, in order [for them] to be captured in the bill."

A spokesman for President Muhammadu Buhari meanwhile told Al Jazeera on condition of anonymity that the government had "not made a position" yet on the act, which was introduced by legislators and has not been sponsored by the administration.

Rights groups Amnesty International and Human Rights Watch have raised the alarm over the bill's possible effect on public discourse in a country with an estimated 113 million internet users, 30 million of whom are active on social media.

"Social media is one of the last remaining places where Nigerians can express their opinions freely," Seun Bakare, programmes manager for Amnesty's Nigeria branch, said in a statement on December 4.

"The harassment of journalists and bloggers and the introduction of the Cyber Crimes Act have already shrunk the civic space and created a climate of fear," Bakare added, citing a 2015 piece of legislation that criminalised a broad range of online activity.

'Problematic for many reasons'

Other critics have meanwhile argued the legislation would not only prove restrictive, but also ineffective.

Berhan Taye, a senior policy analyst at global internet advocacy organisation Access Now and leader of the group's #KeepItOn campaign in Africa, said the bill was "extremely problematic for many reasons".

According to Taye, the provisions allowing for internet access to be cut off would not solve more fundamental problems about the veracity of content being shared online - a major talking point in Nigeria's latest presidential election in February.

"An internet shutdown does not solve the problems of disinformation and misinformation," Taye told Al Jazeera, adding that "fake news is a global problem".

Any such move could also have major ramifications for Nigeria's economy, with a 24-hour blackout projected to cost $134m, according to the Cost of Shutdown Tool developed by non-profit organisation The Internet Society and Netblocks, a non-governmental internet governance observatory.

However, supporters of the Social Media Bill have cast aside such concerns, arguing it can be applied effectively and deliver transformative security benefits.

Senator Muhammad Sani Musa, a member of Buhari's political party and a co-sponsor of the legislation, said it would help stop the spread of fake news in Nigeria and hence curtail groups seeking to undermine the country's cohesion.

"Individuals and groups influenced by ideologies and deep-seated prejudices in different countries are using internet falsehood to surreptitiously promote their causes, as we have seen in Nigeria with the insurgency of Boko Haram," Musa said while defending the bill in November.