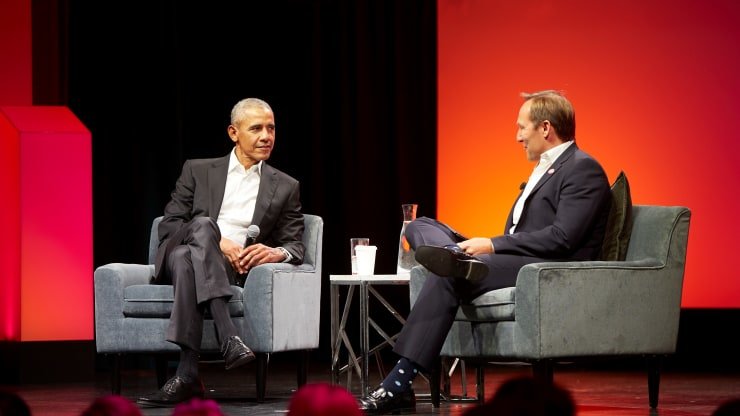 President Barack Obama spoke at an event on Wednesday in San Francisco hosted by software company Splunk. Obama discussed how tech can help play a role dealing with critical issues like climate change and health care. The event came a day after President Trump held his first Bay Area fundraiser.

President Barack Obama didn’t mention Donald Trump by name on Thursday during a talk in San Francisco, but he clearly referenced his successor when he suggested that two things a president should avoid doing are watching TV and social media.

Even without invoking Trump’s name, he was taking on the agenda of the current president in discussing the urgency of addressing climate change. Speaking at an event hosted by software company Splunk, Obama hit on a number of areas where technology advancements can benefit society, including health care and even traffic congestion.

But, following up on a key issue from his eight-year presidency, Obama said there’s no bigger challenge facing us than climate change. While technology can solve certain issues related to the changing environment, ultimately “it’s a moral decision that we make,” he said.

“There are a handful of issues that if we don’t get right we have real problems,” Obama said. “Climate change is a big problem.”

His keynote comes a day after President Trump held his first fundraiser in the Bay Area since becoming president in 2017. The $1,000 to $50,000-per-plate event on Tuesday was at the home of Sun Microsystems co-founder Scott McNealy, and attracted protesters with a giant inflatable baby Trump.

One of Trump’s key efforts is rolling back Obama-era regulations, most notably those related to environmental rules. The president said on Wednesday that his administration is barring California from setting its own auto emissions standards, setting up the latest struggle over the administration’s push to unravel restrictions on businesses. California has been insulated from many of Trump’s efforts because the state insisted on setting its own strict standards under a federal waiver issued in 2013.

Society has to make the decision “that we are going to mitigate as much as possible this problem that we’ve created so our kids and grandkids and the human family can manage,” Obama said.

Obama’s visit to San Francisco comes as tech giants Amazon, Google, Facebook and Apple face heightened legal and regulatory scrutiny for potential anticompetitive practices and amid the continued fallout from the abuse of social platforms by foreign actors ahead of the 2016 election.

While the former president didn’t weigh in on the antitrust debate, he did offer a personal anecdote about how smartphones have been great for keeping in touch with his two daughters, who are now in college, and connecting society at large even though there’s a broader crisis in how social media is dividing people and leading to loneliness.

One-sixth of the economy

One area where he sees tremendous potential for technology is in health care and reducing the inefficiencies in the system. With health care accounting for one-sixth of the U.S. economy, we should expect much better outcomes with “very modest improvements in how we deliver customer service to people who are sick,” he said.

And we should be investing in solutions to use that money more efficiently so we’re both less sick and have more capital to spend elsewhere.

“That’s all money that could be used for early childhood education and rebuilding roads and bridges an cleaning our water and putting young people back to work. Those are wasted resources that I think big data can really capture in a powerful way, but it does require some guardrails and thinking through what the framework is to protect patient privacy.”