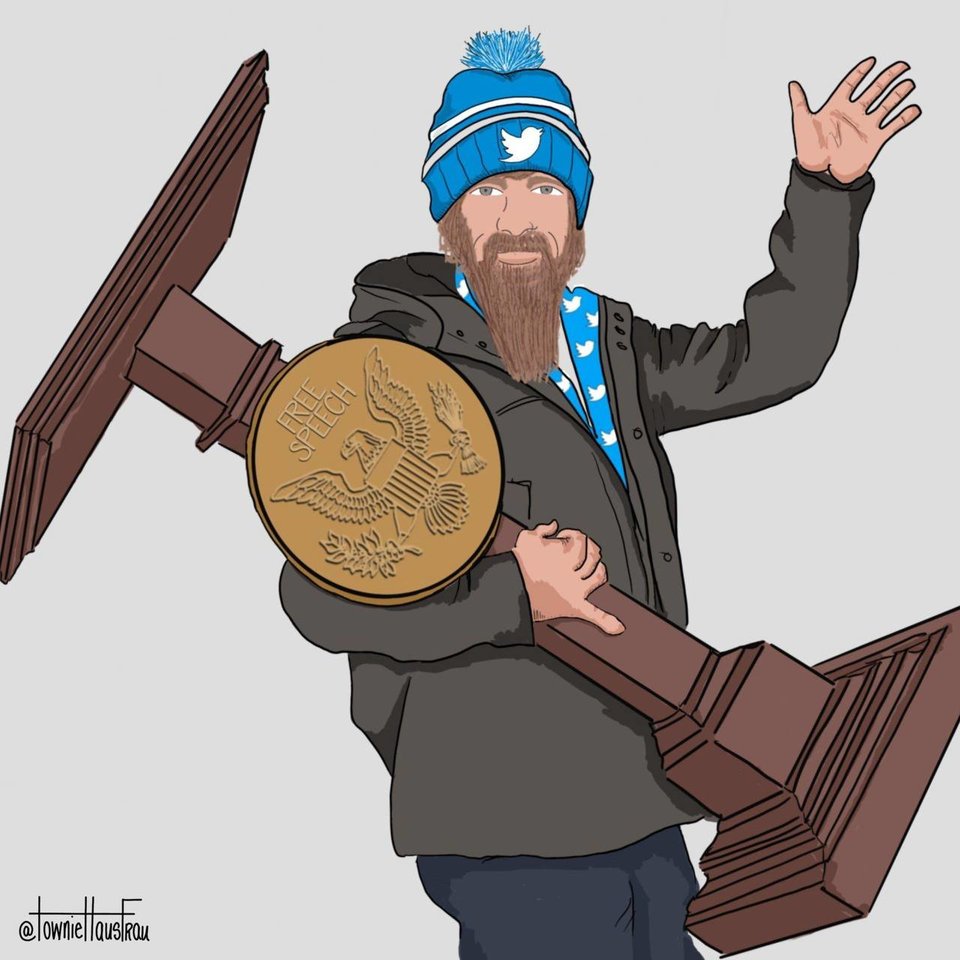 As rioters were gathering around the US Capitol last Wednesday, a familiar question began to echo around the offices of the large social networks: what should they do about Donald Trump and his provocative posts?

The answer has been emphatic: ban him.

Parler, a social media platform that sells itself on a lack of moderation, was removed from app stores and refused service by Amazon.

The action has sparked a huge debate about free speech and whether big technology companies – or, to be more precise, their billionaire chief executives – are fit to act as judge and jury in high-profile cases.

So what are the arguments on both sides – and who is making them?

For many, such social media bans were the right thing to do – if too late. After all, the incitement has already occurred and the Capitol has already been stormed.

“While I’m pleased to see social media platforms like Facebook, Twitter and YouTube take long-belated steps to address the president’s sustained misuse of their platforms to sow discord and violence, these isolated actions are both too late and not nearly enough,” said Mark Warner, a Democratic senator from Virginia. “Disinformation and extremism researchers have for years pointed to broader network-based exploitation of these platforms.”

Greg Bensinger, a member of the editorial board of the New York Times, said what happened on 6 January “ought to be social media’s day of reckoning”.

He added: “There is a greater calling than profits, and Mr Zuckerberg and Twitter’s CEO, Jack Dorsey, must play a fundamental role in restoring truth and decency to our democracy and democracies around the world.

“That can involve more direct, human moderation of high-profile accounts; more prominent warning labels; software that can delay posts so that they can be reviewed before going out to the masses, especially during moments of high tension; and a far greater willingness to suspend or even completely block dangerous accounts like Mr Trump’s.”

Even observers who had previously argued against taking action had changed their mind by the weekend. “Turn off Trump’s account,” wrote tech analyst Ben Thompson.

“My preferred outcome to yesterday’s events is impeachment. Encouraging violence to undo an election result that one disagrees with is sedition, surely a high crime or misdemeanor, and I hold out hope that Congress will act over the next few days, as unlikely as that seems … Sometimes, though, the right level doesn’t work, yet the right thing needs to be done.”

Free speech activist Jillian C York agreed that action had to be taken, but, she said on Monday: “I’m cautious about praising any of these companies, to be honest. I think that in particular Facebook deserves very little praise. They waited until the last moment to do anything, despite months of calls.

“When it comes to Twitter, I think we can be a little bit more forgiving. They tried for many, many months to take cautious decisions. Yes, this is a sitting president; taking them down is a problem. And it is problematic, even if there is a line at which it becomes the right choice.”

Some have wondered whether the platforms’ convenient decision to grow a backbone has less to do with the violence of the day and more with political manoeuvring.

“It took blood & glass in the halls of Congress – and a change in the political winds – for the most powerful tech companies to recognise, at the last possible moment, the threat of Trump,” tweeted Senator Richard Blumenthal, from Connecticut.

Predictably, opposition to Trump’s ban came from his own family. “Free speech is dead and controlled by leftist overlords,” tweeted his son Donald Jr. “The ayatollah and numerous other dictatorial regimes can have Twitter accounts with no issue despite threatening genocide to entire countries and killing homosexuals etc… but The President of the United States should be permanently suspended. Mao would be proud.”

But the ban, and the precedent that it could set, has worried some analysts and media experts.

“Banning a sitting president from social media platforms is, whichever way you look at it, an assault on free speech,” the Sunday Times wrote in an editorial. “The fact that the ban was called for by, among others, Michelle Obama, who said on Thursday that the Silicon Valley platforms should stop enabling him because of his ‘monstrous behaviour’, will add to the suspicion that the ban was politically motivated.”

On Monday, the German chancellor, Angela Merkel – hardly known for her affection for the US president – made it clear that she thought it was “problematic” that Trump had been blocked. Her spokesperson, Steffen Seibert, called freedom of speech “a fundamental right of elementary significance”.

She said any restriction should be “according to the law and within the framework defined by legislators – not according to a decision by the management of social media platforms”.

The ban has also worried those who are already concerned about the strength of Silicon Valley.

“The institutions of American democracy have consistently failed to hold President Trump’s unrestrained authoritarianism, hate and racism accountable,” says Silkie Carlo, director of Big Brother Watch, “but this corporate power grab does nothing to benefit American democracy in practice or in principle.”

“American democracy is in peril if it relies on a corporate denial of service to protect the nation from its own president, rather than rely on accountable institutions of justice and democracy,” Carlo added.

For York, such concerns are valid, but risk an over-emphasis on US politics and concerns. “The majority of the public doesn’t care about these issues on a day-to-day basis,” she says, citing world leaders such as Jair Bolsonaro and Narendra Modi as others who have engaged in hate speech and incitement on Twitter.

“It’s only when it hits Trump, and that’s the problem. Because we should be thinking about this as a society day to day.”