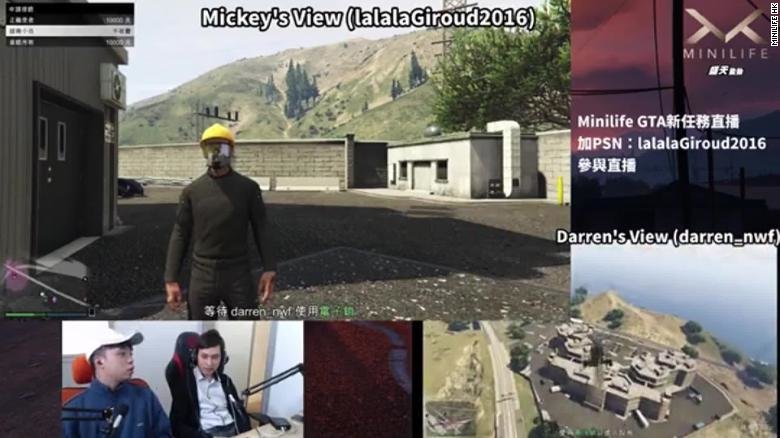 The Hong Kong political crisis is now playing out in the virtual world.
Popular online video game "Grand Theft Auto V" has become a battleground between protesters in the semi-autonomous Chinese city and their rival players in mainland China.

The online duel began after Hong Kong players discovered that their in-game avatars could dress like protesters, wearing black clothing, gas masks and yellow safety helmets. They shared the discovery last week on LIHKG, a social media platform and discussion forum similar to Reddit that is popular in Hong Kong.

Hong Kong has been rocked by anti-government protests for more than six months, with escalating violence and anger on all sides. The demonstrations began in June after the government introduced a bill that would have allowed the extradition of people across the border to face trial in mainland China.

The bill has since been withdrawn, but the protests have expanded to include calls for greater democracy and an inquiry into accusations of police misconduct.

GTA V is an action-adventure game that rewards gamers for committing virtual crimes. It allows dozens of players to interact simultaneously in "open world" environments, with bank heists and carjackings at the core of its gameplay.

While most video games keep the player busy on a predetermined course of action, open-world games allow greater freedom to explore. And it didn't take long for Hong Kong gamers to begin mimicking the real-life actions of hardcore protesters by throwing petrol bombs, vandalizing train stations and attacking police within the open world of GTA V.

Mainland Chinese gamers were quick to notice, and several of them subsequently took to the Twitter-like social media platform Weibo to call on other players to defeat their Hong Kong rivals.

Using a derogatory term adopted by some police officers to refer to protesters, one Weibo user posted: "Cockroaches expressed their desire to kill GTA and beat us, the war in this game may become more fierce and fierce. Are you ready?"

Other Weibo users responded by posting screenshots of their characters dressed as riot police and wielding guns, with the posts captioned: "Ready!"

Several intense battles played out simultaneously, according to Hong Kong gamer Mickey Chang, who is in his 20s and plays games that are live-streamed on the YouTube channel Minilife HK.

Chang said that he liked to play as a protester because it helped to "raise awareness" overseas about the situation in Hong Kong.

"(GTA) is a fun way of engaging people with different viewpoints to discuss, since you can have up to 30 strangers on a server that may not know much about Hong Kong," he said.

Launched in 1997, the "Grand Theft Auto" series by Rockstar Games is one of the most successful in video game history. GTA V alone has sold over 125 million copies since its 2013 launch. But the series has long been criticized for its violent gameplay — the 2001 release, GTA III, achieved notoriety after it was discovered that players could hire a prostitute, have (offscreen) sex with her, kill her, and then steal her money.

CNN Business has reached out to Rockstar Games for comment about its use by Hong Kong protest supporters and their opposition.

This is not the first time that Hong Kong protesters have taken to video games to publicize their struggle. In October, Google removed a role playing game called "The Revolution Of Our Times" -a protest slogan -from the Play Store, citing a violation of its policies.