Red Bull's Verstappen flipped up beside Hamilton as the pair battled for position, the rear of Verstappen's car landing on Hamilton's Mercedes, the halo head protection device possibly saving the seven-time champion from injury.

Both retired, beached in the gravel, meaning Verstappen remains five points ahead of Hamilton in the title race.

However, the Dutchman was handed a three-place grid penalty by stewards after the race, to be taken at the Russian Grand Prix in two weeks' time.

Ricciardo's British team-mate Lando Norris was second after a brilliant late overtake, handing the team a first one-two since the 2010 Canadian Grand Prix and their first victory in nearly a decade.

Ricciardo screamed over team radio as he crossed the line: "Whaaaaaaaaaaaaaaaaaaa! Yes! For anyone who thought I left, I never left. Thanks guys."

How did Verstappen end up on top of Hamilton?

Following a rocket start by Ricciardo from second on the grid, Verstappen fell back to second place, as Hamilton battled with Norris for third after failing to gain a place.

As the race appeared to settle down into a pattern of both title rivals being held up by a McLaren, Verstappen reacted to Ricciardo's first pit stop by coming in and suffering a slow 10-second pit stop with what appeared to be a poorly positioned front-right wheel.

At the same time, Hamilton was busy overtaking Norris - as he benefited from starting the race on hard compound tyres, with all other front runners on worn mediums - and then came in for his stop.

But he also suffered a tardy stop and the pair met by chance on track as Hamilton left the pits. The Briton held the inside line and Verstappen refused to yield on the outside as they entered the slow-speed Rettifilo chicane.

Verstappen had more than half a car's length by Hamilton, but was squeezed off the track and as his Red Bull bounced against the kerbs, a rotating rear wheel launched him into the air and pitched it over Hamilton's car before thumping down on the air box which sits just above the driver's head.

The car's flat chassis slid down across Hamilton's cockpit and appeared to make contact with the halo head protection device introduced into F1 in 2018 following the deaths of Jules Bianchi in F1 and Justin Wilson in American Indy car in 2015.

Both drivers have been summoned to race stewards to discuss the incident, and penalties could be handed out. 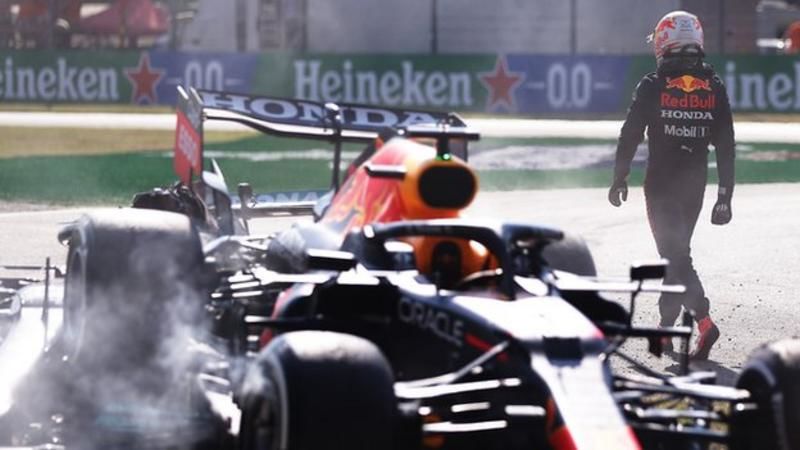 A differing version of events

Hamilton told Sky Sports afterwards: "I'm a little bit stiff and sore on my neck because it [Max's tyre] landed on my head but I'll be OK.

"The stop was slow and I lost a couple of seconds - I came out, saw Daniel [It was Norris] come past, Max was coming and I made sure to leave a car's width on the outside.

"I was ahead into turn one, turned into turn two and then Max was on top of me.

"It's exactly the same scenario that happened at Turn Four [at Imola earlier in the season] where I was in the same position as Max and I gave way, that's racing - this time he didn't want to give way.

"He knew what was going to happen as soon as he went over the kerb but he didn't back out - I don't know what else to say."

Verstappen said: "We knew it would be tight. I went around the outside and he kept on squeezing me. I just wanted to race. People will start to talk about Silverstone but I didn't expect him to keep on squeezing and squeezing because we still would've had a car's width out of turn two.

"I don't know why he kept pushing wider and wider.

"You need two people to work together to make the corner work but unfortunately, we touched. If one guy is not willing to work, it is not going to happen.

"It's very unfortunate what happened today but I think we are professional enough to step over it. I think for sure we can talk about it." 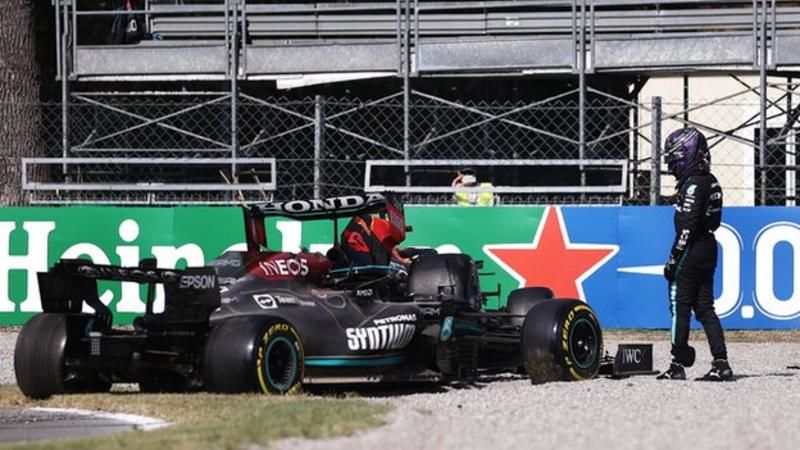 Hamilton will be thankful for the halo after the frightening collision

An amazing achievement for a team on the rise

The event at Monza took place in warm, dry conditions in Italy's Lombardy region near Milan at a track affectionately known as the 'Cathedral of Speed', owing to its rich motorsport history and old, disused banked corners nestled amid the trees in Monza's beautiful royal park.

The expectation was that Verstappen, who started on pole, would take - according to Hamilton - an "easy win", particularly with Hamilton only fourth after a poor start in Saturday's 'sprint' qualifying race to decide the grid for the grand prix.

But both McLaren drivers held their own after a great start and Ricciardo re-inherited the lead after Hamilton's pit stop. Norris had lost out during the pit stops and was behind Charles Leclerc's Ferrari when the race restarted after the extended safety car period.

The Briton chased Leclerc down the start-finish straight and then surprised the Monegasque by going on to the grass at high speed around the Curva Grande, passing the him on the inside.

Hamilton's team-mate Valtteri Bottas - who started last because of a power unit change despite winning Saturday's sprint qualifying - produced a superb recovery drive to claim the final podium place, albeit only after Red Bull's Sergio Perez, who finished third on the road, was hit with a five-second penalty for failing to give a place back after an illegal overtake on Leclerc.

Britain's George Russell, still on a high following the announcement he will partner Hamilton at Mercedes next season, came home ninth to score two more valuable points for Williams.

Driver of the day 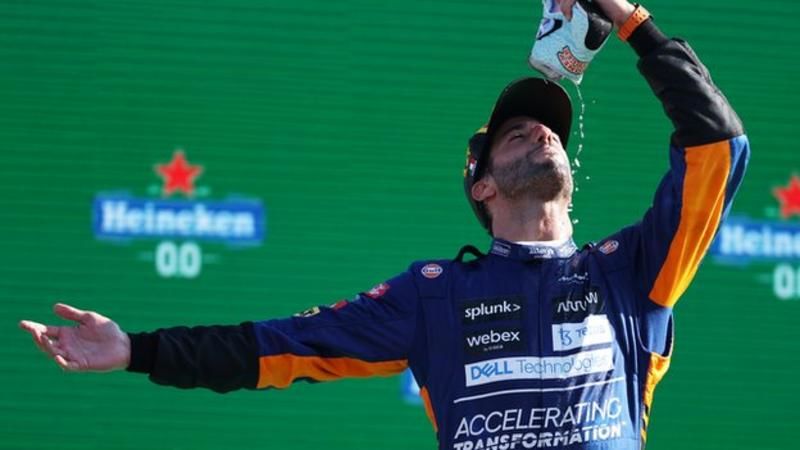 Bottas has been flawless all weekend, just days after his rejection from Mercedes and replacement by Russell went public. But Ricciardo's recovery is arguably greater - a lost soul in a car he just couldn't understand all season, the Australian overtook his higher-achieving team-mate in the sprint race and got a superb start off the line in on Sunday to overtake a faster driver in a faster car in Verstappen. And he got a point for the fastest lap, too. Chapeau.

After a breathless triple-header in Belgium, the Netherlands and Italy, a weekend off is next up before the Russian Grand Prix in Sochi - where the racing could be a little more tame, even if relations between the two title protagonists may not be.